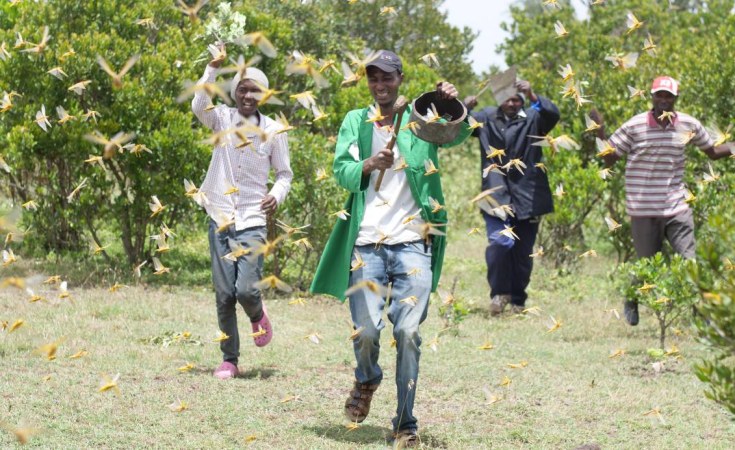 As another wave of locusts looms over East Africa, farmers are struggling to come to grips with the destruction of yet another harvest.

In a field of crops in eastern Kenya, a farmer implores his family to help him shake off locusts clinging to the maize, which is almost ready for harvest.

The scene is upsettingly familiar: This time last year, another devastating wave of locusts swept through the same area. The farmers here say they had never witnessed anything like that first plague which devoured every green plant on their farms. Now it's happening all over again.

"The locusts have eaten all my red and black beans," local farmer Prisca Muguru told DW. "The farmers who had grown wheat but didn't harvest it in time have also suffered significant losses. But even after they've eaten everything on the farm, [the locusts] have not left. They are still here."

The first wave took its toll on Kenyan farmers. Eventually, the locusts disappeared, and the government helped affected farmers by offering provision-free seeds and fertilizers. One by one, fields were replanted, and the farmers eagerly awaited the next harvest, which usually takes place in mid-February. Now it seems their efforts were all for naught.

Cotton farmer Kirika Ngatia said he never thought that locusts could damage crops like cotton. He watched helplessly as the swarm descended on his farm, noticing that the locusts didn't even rise from the plants until they were entirely eaten.

"[The locusts] ate any plant that they found on my farm," he told DW. "There are so many of them that there is nothing we could have salvaged. I have never witnessed such a huge number of locusts before."

And the locusts don't limit their preference to farmers' crops. They devour grass that nomadic pastoralists rely on to keep their livestock alive, vegetable gardens, fruit trees, and even the leaves on trees..

According to the Famine Early Warning System, several regions across the Horn of Africa are expected to face a food crisis through until at least May in part due to the locust upsurge.

While Kenya is still grappling with the impact of the coronavirus pandemic, farmers like Ngatia said the virus now far from his mind.

"We have even forgotten the challenges we have faced due to coronavirus," he said. "This calamity is more harmful to us than coronavirus."

It's not just the farmers themselves who are struggling. Agriculture student Janita Abuto saved her money and took out a loan to invest in farming -- albeit at the worst possible time. She said that compared to last year's wave, these locusts appear to be much more destructive.

"This time, they are much more aggressive than we experienced last year because this time the maize is quite tender," she told DW. "They are chewing the maize crops that are not ready. They are also chewing the leaves and anything green on sight, the fodder and all that."

The agriculture sector is vital to Kenya's economy, with about 75% of Kenyans earning all or part of their income from farming, either directly or indirectly. However, only 20% of Kenyan land is appropriate for farming, putting even greater pressure on the sector during damaging events such as locust swarms.

A bigger wave than the last

The Food and Agriculture Organization (FAO) has already warned that this wave will be bigger and deadlier than the last.

Cyclone Gati, which made landfall in Somalia in November, brought torrential rains which created favorable conditions for desert locusts to breed.

According to Kenya's Agriculture Minister Peter Munya, 15 out of 47 counties in Kenya have been affected by the waves of locusts coming in to the country from Ethiopia and Somalia.

According to the FAO, as many as 80 million locusts can be found in each square kilometer of a swarm. Even a small swam can consume the same amount of food in one day as approximately 35,000 people, 20 camels or six elephants.

However, Munya also noted that Kenya is better prepared to contain and eradicate the swarms this year, having learned valuable lessons about the tactical use of pesticides from the previous waves.

Danger Posed By Desert Locust Swarms Is Not Over For Africa
Tagged:
Copyright © 2021 Deutsche Welle. All rights reserved. Distributed by AllAfrica Global Media (allAfrica.com). To contact the copyright holder directly for corrections — or for permission to republish or make other authorized use of this material, click here.