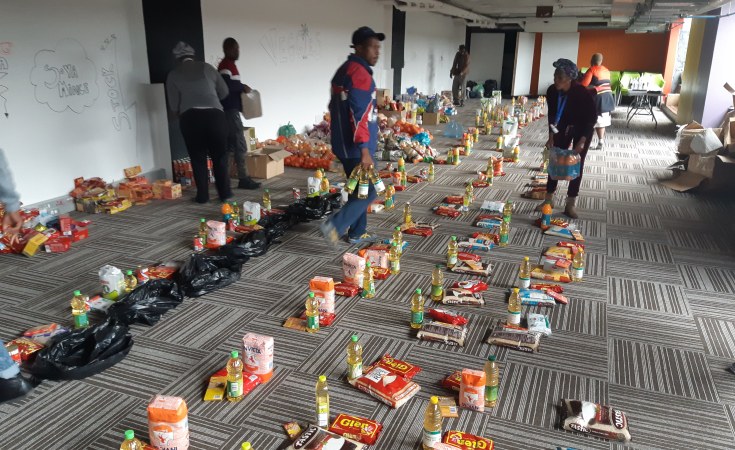 Discott/Wikimedia Commons
Volunteers in Philippi, Cape Town packing food parcels to be given out to the needy during the Covid-19 pandemic lockdown.
Deutsche Welle (Bonn)
By Cai Nebe

The coronavirus pandemic has struck southern Africa harder than any other region on the continent. DW looks at stories from South Africa to Tanzania that shed light on how different countries are battling the disease.

Southern Africa welcomed news on Thursday that the African Union (AU) had secured an additional 400 million doses of coronavirus vaccines for its member states. South Africa is set to receive its first dose of the AstraZeneca vaccine on Monday after approving it for emergency use. However, there is still little cause for celebration as the region's healthcare systems begin to wilt under the strain of the second wave of the coronavirus pandemic. The devastating reality of the pandemic is playing out differently in these five southern African countries.

The South African government says it is expecting the first consignment of one million doses of the AstraZeneca vaccine from the Serum Institute of India on February 1. It's good news for the country, which has the highest number of officially recorded COVID-19 cases and deaths on the continent and is also currently dealing with a new, more infectious variant of the virus.

Frontline healthcare workers are expected to be given first priority.

"We are still on course because the issue was to target in January and we haven't got any reason to worry about that change," Health Minister Zweli Mkhize said.

But the rise in myths concerning the much-anticipated roll-out of the COVID-19 vaccine is increasingly becoming a headache for authorities. One popular new conspiracy theory claims that the vaccines will be used to trace people through the 5G mobile network.

"It's really an issue of educating people as to why vaccines are probably our only way out," says Shabir Madhi, a professor of vaccinology at the University of Witwatersrand in Johannesburg.

These myths, which are primarily spread via social media, seem to be gaining more followers every day. South African resident Davie Mashudu says he no longer trusts the vaccine is safe.

"To me I don't think the vaccine should be made compulsory for COVID-19," he told DW. "I won't take the vaccine."

Meanwhile, President Cyril Ramaphosa has urged government officials to do whatever they can to dispel the myths and conspiracy theories before the vaccine is rolled-out around the country.

"[We need to ensure] that we speak accurately and clearly, basing our pronouncements on facts and if it is [to do with] medical issues, on science and medical evidence," he said.

South Africa aims to vaccinate 67% of its population, or about 40 million people, by the end of 2021.

However, an average of 50 coronavirus-related deaths per day have been recorded in just the past three weeks. Four serving cabinet ministers and several high-ranking politicians died of COVID-19 during this spike in cases, prompting a tighter lockdown. Zimbabwe has now officially recorded 31,320 COVID-19 cases and more than 1,000 deaths.

At Zororo Memorial Park, a cemetery on the outskirts of the capital Harare, mourners can only watch from a distance as undertakers lower their loved one into the ground.

"Times are hard and I am extremely worried," Titus Chimombe, a family member of the deceased told DW. "I have just lost a beloved relative. The times which we are in are full of fear, anxiety and desperation."

Grave diggers have been kept busy at this cemetery. Kudakwashe Gokondo, the cemetery's manager, says burial numbers are beginning to overwhelm his staff.

"Previously at this cemetery, we used to conduct a maximum of five to six burials per day," he told DW. "This would have been considered high. Now the number has risen to more than 20 burials per day."

After four ministers in President Emmerson Mnangagwa's cabinet succumed to the virus, the president quickly promised a vaccine roll-out across the country.

But ordinary Zimbabweans like Titus Chimombe are skeptical of the state's ability to successfully pull off a mass-vaccination program.

"I am not sure if the current government's response can rise to meet this deadly pandemic," he told DW. "The public health system seems like it is not prepared. As we speak right now, there is minimal testing being done for COVID-19."

Zambia's University Teaching Hospital (UTH) -- the country's biggest referral hospital -- treats hundreds of patients daily. But according to Chitalu Chilufya a physician and former health minister, the increaing number of dead-on-arrival cases being reported in recent months may be related to the rise in people self-medicating against COVID-19. He said many Zambians are taking drugs developed for other diseases, or are resorting to "various herbal concoctions."

"We have noted abuse of antibiotics and hydroxychloroquine among the public and we've even seen an escalation in the prices of certain drugs that are rumored to be effective against COVID-19," he told DW.

25-year old Onechi Kasolo survived a COVID-19 infection. But his attempts to self-medicate against the virus left him in the intensive care unit on a ventilator for a week.

"I never imagined on New Year's Eve I would be on oxygen in the ICU isolation ward," he told DW. "It was a terrible experience. Really terrifying."

But laboratory technician Siphiwe Mwanza's brother was not so lucky. He died aged just 40 following COVID-19 complications and after trying to self-medicate.

"I had seen worse and they had pulled through, so I did not think my brother was going to die," she told DW.

Health officials have called on citizens to seek early medical attention if they are suffering from symptoms.

"As you self-medicate you are losing time," says Chilufya. "We will have challenges resuscitating patients daily. 10 to 15 new admissions now require oxygen."

Zambia has recorded over 48,000 cases of COVID-19 with almost 700 deaths. Over 200 people are currently on ventilators across the country.

At Kamuzu Central Hospital in Lilongwe, Personal Protective Equipment (PPE) and oxygen is in short supply. It's a familiar scene at many of Malawi's hospitals.

With government-provided resources severely limited, concerned individuals like Onjezani Kenani, a Malawi citizen based in the UK, have started organizing online fundraisers to provide hospitals with desperately-needed equipment.,

Kenani is the lead organizer of the group "Covid Response Private Citizens." So far, by sharing his GoFundMe over social media platforms including Facebook and WhatsApp, he has managed to raise over €8,000 ($9,710).

However, Justice Minister Titus Mvalo has called on private individuals raising COVID-19 relief funds to work closely with the government to prevent fraud.

"We appeal to international donors to assist with resources and work collectively with appropriate authorities with any resources that are raised," he said.

Over 550 Malawians, including two cabinet ministers, have died from complications related to COVID-19.

In contrast to his sub-Saharan counterparts, Tanzanian president John Magufuli has continued to push back against the global medical consensus of the COVID-19 pandemic.

On Wednesday, he claimed -- without offering evidence -- that vaccines may be part of a foreign plot to spread illness and steal Africa's wealth. Magufuli has also branded COVID-19 vaccines as dangerous and unnecessary, instead urging people to trust in God and rely on alternative remedies such as inhaling steam.

"We in Tanzania have managed to stay for a year without corona," he said during a speech. "Even here, no one has put on a mask. Our God is beyond Satan and Satan will always fail using different diseases."

His government has not published national coronavirus data since mid-2020, which puts the current total number of confirmed cases at 509, with 21 deaths.

The World Health Organization (WHO) has urged Tanzania to listen to the science, with the WHO's Regional Director for Africa, Matshidiso Moeti, tweeting a thinly veiled message to Tanzanian authorities.