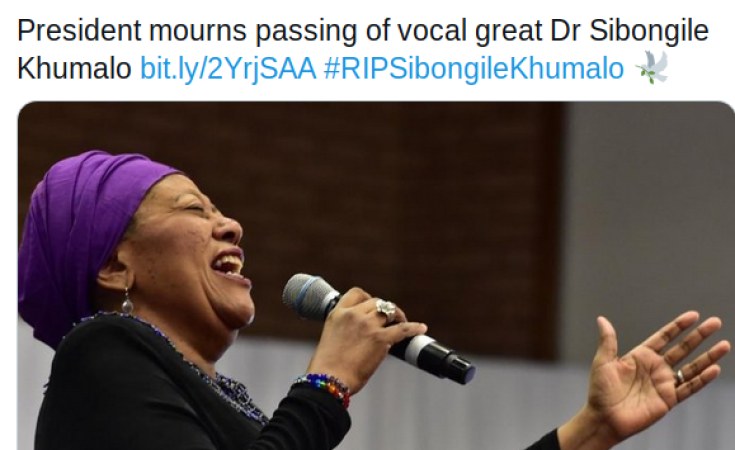 @PresidencyZA/Twitter
A tweet by the South Africa Presidency announcing the passing of Sibongile Khumalo.
The Conversation Africa (Johannesburg)
analysis By Christine Lucia

The passing of Sibongile Khumalo at the far, far too young age of 63 was a body blow.

Sibongile epitomised 'the new South Africa', as it was born and as it matured. She sang in every style - from Carmen to UShaka - with equal accuracy, generosity and joie de vivre, making everything 'popular' to millions of people without ever sacrificing vocal or musical professionalism.

This was one of her greatest gifts, that she made a place for everyone with her voice, a golden, melting voice that made all, young and old, rich and poor, professors and farmers, feel 'at home'.

To paraphrase the closing text of the Alto Rhapsody:

If there is on your psaltery, Father of love, one voice our ears can hear, then refresh our hearts! Open our clouded gaze to the thousand springs next to us who thirst in the wilderness.

In a world of great voices, hers was a truly great South African voice. In its tonal beauty and through the wide repertoire to which she applied it, Sibongile's voice represented everyone.

From choral to classical to jazz

She made a place for indigenous choral music, with which she was well acquainted since childhood through many choirs and choral competitions and above all through her father, music professor Khabi Mngoma, and his inimitable Ionian Male Choir. Her unique solo renderings of choral songs, in beautiful arrangements, include John Knox Bokwe's Plea for Africa, Joshua Pulumo Mohapeloa's U Ea Kae, B.P.J. Tyamzashe's Isithandwa Sam, and Michael Moerane's gauntly tragic Della.

She made a place for herself with overwhelming success even in the highly populated area of jazz singing and in a land of great female jazz singers, with numbers such as Strike Vilakazi's Meadowlands, Todd Matshikiza's Back O The Moon, and Winston Mankunku's Yakhal'inkomo - which she sings in her own distinctive style and fuses into a unique vocal medley, on this recording.

Above all, Sibongile did more than any other professional singer of her time to bring African traditional music into the public ear and the popular imagination, onto radio, television and recordings, and into the concert hall.

Again, with the help of magnificent arrangers and composers, she performed and recorded the songs of Princess Constance Magogo KaDinuzulu, which can be heard on tracks 5-12 of one of her most 'classic' albums, Sibongile Khumalo.

Sibongile Khumalo (née Mngoma) was born in Soweto in 1957, the daughter of Khabi and Grace Mngoma. Her father was Professor of Music at the University of Zululand and one of the great conductors and vocal coaches of his generation. He gave Sibongile her first voice lessons.

She qualified at the universities of Zululand and the Witwatersrand in both music and personnel management. She went on to have a distinguished career as a singer as well as an arts advocate and member of numerous national arts committees.

She sang at Nelson Mandela's inauguration as South Africa's president in 1994 and in 2008 she was awarded the Silver Order of Ikhamanga by the president.

Sibongile performed internationally with a number of orchestras and jazz bands.

Sibongile's voice was officially mezzo but she commanded an enormous range, both in pitch and expression. She could become a soprano and a contralto, at will, and explore profound vocal contrasts.

No other professional singer, for example, has captured the husky, throaty low register of Zulu umakweyana and ugubhu bow singers. Perhaps the reason for this is that she heard Princess Magogo herself perform, at her homestead in Nongoma, when she was about 13. As she described it in the sleeve notes of Sibongile Khumalo:

My dad made me sit at her feet to listen to her play ugubhu and sing. At the time it did not make sense, but I had to obey. I thought he was being very unkind to me because all the other children were out in the yard playing. It must have been destiny. In my professional years the music came back and it began to make sense.

She also described how South African playwright and film producer Duma Ndlovu, who had been in exile for many years, challenged her to include this material in her repertoire and she took the bait.

She approached the South African Music Rights Organisation to have the music commissioned and they approached Professor Mzilikazi Khumalo, who arranged eight songs from Magogo's very extensive repertoire, and Professor Peter Klatzow, who first created a piano accompaniment and later orchestrated the song cycle.

Sibongile made everyone love her - no mean feat in the world of singers, especially opera singers. She was a prima donna, although not in temperament, and was most certainly South Africa's 'diva'.

Sibongile Khumalo, the Transformative Singer Who Built an Archive of Classics