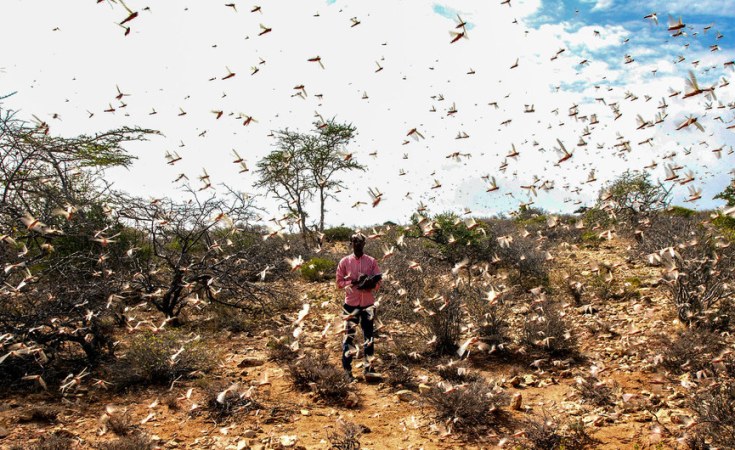 Makueni — Swarms of locusts have invaded farms in sections of Makueni County Monday.

The locusts were spotted in large areas of Mbooni and Kaiti Constituencies in the County.

Farmers interviewed expressed fears of the losses they are likely to incur following the invasion on their crops.

"The locusts came through, started to devour the only left crops in our farms," one farmer said, "Some have completely eaten all leaves, leaving only the stems."

Last month, Agriculture Cabinet Secretary Peter Munya said at least 15 counties were affected by the locusts invasion, but assured that efforts were in place to manage the situation.

The government has expressed optimism of eradicating the locusts' menace.

Munya said that 80 percent of the locust swarms that invaded the country during the second wave have so been treated and surveillance was underway to combat the rest.

He said that of the 75 swarms that have been identified, 66 of them have been treated.

"So far, the total number of swarms that settled in the Country between November 2020 and January 2021 are 75 out of which 66 have been treated reflecting a total area of 19,100 hectares. The exercise has thus largely been successful," Munya said.

Munya pointed out that 9 sprayer aircrafts have been deployed in different Counties which are adversely affected while 500 National Youth Service (NYS) personnel have been trained to help on ground control of the locusts.

"There are sufficient control pesticides both at the headquarters and all the field control bases to handle the desert locust invasion. Where necessary will purchase more," said Munya.

Additionally, 21 vehicles mounted with sprayers for ground control operations in the various bases.

In March last year, Kenya and a number of countries in the horn of Africa including Ethiopia, Somalia and Uganda experienced the worst locust attack in seven years.

The first wave affected over 30 counties in Kenya with most of them being the Arid and Semi- Arid ones.

Previous Story
'I Have Lost Everything. What Do You Expect Me to Eat?'
Next Story
Farmers Struggle As Locusts Ravage Crops Again

'I Have Lost Everything. What Do You Expect Me to Eat?'