Kenya: 16% of Kenyans Likely to Get Cancer Before Age 75 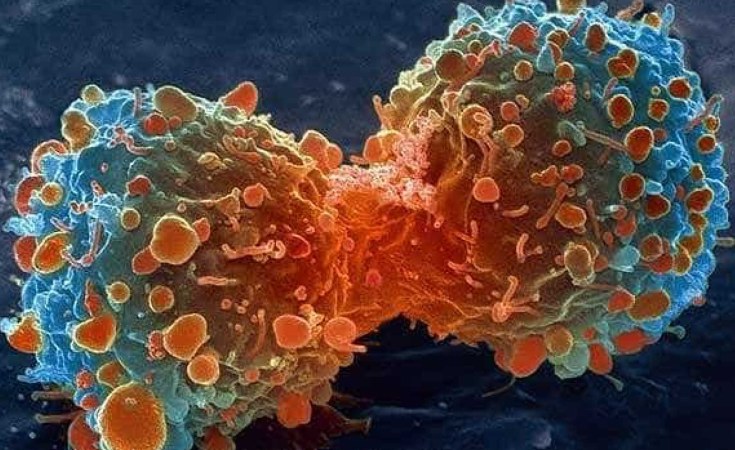 This Day
Cancer cells.
The Nation (Nairobi)
By Elizabeth Merab

Sixteen out of every 100 Kenyans are likely to get cancer before the age of 75, and 12 are also likely to die before the same age, new statistics show.

Globally, 19.3 million people were diagnosed with cancer and 10 million died of the disease in 2020, according to the World Health Organisation's International Agency for Research on Cancer (IARC).

According to the latest report -- Globocan 2020 -- breast, cervix, prostate, oesophagus, and colorectum were the leading types of cancers in the country. In Kenya, the new global data suggests that the burden of the disease has risen to 42,116 cases and 27,092 deaths. This means that there were about 115 cases and 74 deaths daily.

Children and rural populations are increasingly becoming more vulnerable to cancer than it was earlier thought. Further, the most frequent age for female patients was 52, while for men it was 62. The most prevalent cancer in women was breast cancer and cancer of the cervix, while for men it was cancers of the esophagus and prostate.

To investigate demand and supply factors for cancer control, the study surveyed seven of the 47 counties in Kenya in 2013 and 2014. It sampled 1,048 patients with cancer records and 12 healthcare facilities.

Accessing cancer screening and treatment was one of the major hurdles as most cancer care services in Kenya were concentrated within a 5kilometre radius of each other in Nairobi.

Cervical and breast cancers continue to record the leading numbers of death in the country, followed by cancers of the oesophagus, prostate, and stomach. Last year, the country launched a mass vaccination of girls against the human papillomavirus (HPV), which causes cervical cancer.

However, due to Covid-19, a severe decline in the coverage of HPV vaccine for 10-year-old girls, which currently stands at 46 per cent, was recorded. Kenya officially has a free vaccination programme with two doses, six months apart, for all 10-year-old girls.

The pandemic, says Prof Jessie Githanga, a consulting oncologist at the Kenyatta National Hospital (KNH), has worsened the situation.

"Things have been very difficult at KNH because most patients went from early stage to late stage because they couldn't access treatment. When they test positive for coronavirus, it's more difficult for them," noted Prof Githanga.

In men, prostate, oesophagus, colorectum, non-Hodgkin's lymphoma, and stomach are the leading cancers in the number of recorded cases while breast, cervix, oesophagus, colorectum, and ovarian cancers are leading in women. Stomach, colon, rectum, breast, and cervical cancers were typically considered diseases of the old, with most diagnosed in Kenyans aged more than 50 years.

But oncologists at KNH, which treats a majority of cancer patients in Kenya, are recording a worrying trend -- the patients are getting younger by the day and most come in when the disease has advanced, reducing their chances of surviving five years after diagnosis.

Stomach, colon and rectal cancer is increasingly affecting younger patients in Kenya. For a type of cancer that dominated the diagnosis of older patients, doctors are warning that the disease is fast rising in patients below 53 years.

"Most people seeking treatment for colon and rectal cancer in all the major hospitals, both public and private, are presenting with metastases and locally advanced disease. Rectal cancer in Kenya looks bad. Very bad. We are talking sacral adherent, prostate involvement, fistula, perianal ulceration and pelvic side wall fixation. The disease is also increasingly affecting younger people," Dr Alex Muturi, a surgeon, recently posted on his Facebook

A metastatic cancer, or metastatic tumour, is one that has spread from where it started into other areas of the body. Dr Muturi added that the numbers are rising because of two things: lack of a screening programme, and high cost of diagnosis. This is coupled with lack of a high index of suspicion both from the patients and doctors.

Although the country has national cancer screening guidelines, Dr Muturi explained in his post that a programme would enable anyone who needs a test to get it based on risk dependent prioritisation.

"A national screening programme means cost of care and therefore the ability to afford is not the number one determinant of being screened."

Colon cancer is a type of cancer that begins in the large intestine (colon). The colon is the final part of the digestive tract. It usually begins as small, non-cancerous (benign) clumps of cells called polyps that form on the inside of the colon. Over time, some of these polyps can become cancer.

Research conducted for five years by a team of oncologists in patients with colon and stomach cancer showed that colon and rectal cancer cases in Kenya are growing, with an estimated 2,724 new cases and 1,721 deaths every year. The study was conducted from January 1, 2014, to December 31, 2018 at the KNH cancer treatment centre and the referral hospital's records department of 478 patient charts --248 males and 230 females. The mean age of patients with colorectal cancer was 53.

Dr Andrew Odhiambo, an oncologist and lecturer at the University of Nairobi, says in patients diagnosed with colon and rectal cancer, 18 per cent of the 182 cases died within the first year of being diagnosed.

"Colorectal cancer occurs in a relatively young population in our country and most patients present with advanced disease," said Dr Odhiambo, adding that young patients have more aggressive disease.

Further, Kiambu, Kirinyaga, Murang'a and Nairobi counties lead with the highest prevalence cases (187) in the country. Majority of the cases presented with signs of blood in their stool, a condition known as hematochezia, the doctors noted. The records also showed that the patients had abdominal pain, changes in bowel movement, and their intestines were obstructed.

Gastric cancer, also known as stomach cancer in Kenya, has also been documented to present at a younger age and in advanced stages, resulting in poor patient outcomes. Results by Dr Mohamed Maalim, a physician, and a team of oncologists, of 438 patients, showed that many died within six months of diagnosis. Colon cancer is more common in women, with about 2,724 Kenyans getting it every year, according to the World Health Organisation's Globocan data.

Making matters worse is the coronavirus pandemic, which has further delayed diagnosis and treatment for many patients.

"There was a patient with skin cancer who needed surgery. However, to do the procedure, they needed a pre-admission Covid test, which unfortunately turned positive and as a result, the procedure had to be postponed until such a time when their results were negative," described Dr Odhiambo.

He also said restriction on movement during the pandemic saw many patients' access to treatment greatly impacted, especially among newly diagnosed patients.

"Patients who had no faith in county chemotherapy care had no choice but to believe in the system, while those who only relied on India had to find other countries that accepted patients," added Dr Odhiambo, saying that home care services also increased out of fear of contracting Covid-19 in hospitals, which had been categorised as high risk areas.

Nearly 31 per cent of the total cancer burden in sub-Saharan Africa is attributable to infectious agents like bacteria, viruses, fungi, among others. Some infections can cause long-term inflammation in a part of the body leading to changes in the affected cells and in nearby immune cells, which can eventually lead to cancer.

In Kenya, a study published in the African Academy of Sciences suggests that 30.8 per cent and 48.2 per cent of the total cancer cases sampled in KNH and MTRH respectively were associated with infectious agents, while 27.6 per cent and 44.4 per cent were attributable to infections in the two hospitals respectively.

"The sad reality is that even those who can afford private care are also presenting late. Let's question those haemorrhoids, those amoebiasis, those 'food poisonings' that go on for weeks, those 'damu kidogo tu kwa choo' (a little blood in the stool) and those 'a bit of kukaukiwa na choo (hardened stool)," added Dr Muturi.