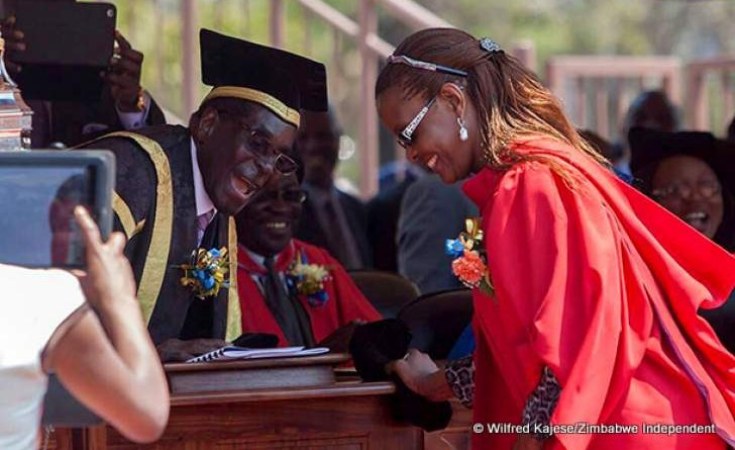 FRESH startling details have emerged indicating how the late former President Robert Mugabe and his family worked with ex-top parastatal and security bosses to ship high-grade diamonds and ivory out of the country.

Mugabe -- who died in September 2019 -- was as shrewd in underhand dealings as he was in politics, according to exclusive information obtained by the Zimbabwe Independent, this week.

This comes amid reports that his vast farming empire under Gushungo Holdings is crumbling, with workers owed salaries, while part of the estate in Mazowe -- 40km north of Harare -- is being leased to a millionaire businessman.

In private briefings this week, it emerged that Mugabe and his family could have had a close working relationship with the then Zimbabwe Revenue Authority (Zimra) commissioner-general Gershem Pasi through a diamond cutting and processing company -- Gemgrade Mining Company.

This was revealed in confidential information belonging to Gushungo Holdings dated October 12, 2015, when a former Mugabe top employee at Alpha Omega stepped down from his post.

Documents which were part of a handover-takeover of confidential files included Gemgrade Mining Company papers -- "a company used by Mr G Pasi for processing the diamonds".

Other classified files included an agreement between Cafnet and Homologue Investments -- an outfit which was marked as a Russian investor "who pulled out last minute" from one of the Mugabe deals.

However, questions abound as to how the Mugabes were in possession of a Gemgrade Mining Company file at a time when the country was extracting diamonds in Chiadzwa, Marange in Manicaland.

The Mugabe-Pasi diamond relationship could have been a conduit to trade in the gems locally and internationally, the confidential papers show.

Pasi could not be reached for comment, as his mobile phone was not reachable. Questions sent via SMS went unanswered.

Mugabe's daughter Bona, who oversees family businesses, could not be reached as her two mobile numbers were inaccessible.

In a letter seen by the Independent this week, dated August 16, 2013, Confidence Mining Limited director operations Cosmas Noah Ngwenya wrote to the Zimbabwe Mining Development Corporation (ZMDC) seeking partnership in the exploration and mining of diamonds in Marange.

"We are Confidence Mining (Pvt) Ltd, a wholly owned Zimbabwe indigenous company incorporated in terms of the Zimbabwe Companies Act. Confidence Mining has huge interests in diamond mining and is thus seeking opportunities to venture into this field. We hereby apply to partner with ZMDC for this venture," reads part of the letter.

"We have both the technical and financial capacity and resources to immediately undertake exploration of the resource. Our area of interest is Marange Diamond area."

Confidence Mining's involvement in the Marange gems and the Gemgrade Mining Company exposes Mugabe's hypocrisy as he accused foreign and local companies of looting Chiadzwa diamonds.

Confidence Mining also has interests in gold mining in the Mazowe area as part of the Mugabes' vast business ventures.

The Zimbabwe Independent also gathered that Mugabe and his wife Grace, were once implicated in an ivory smuggling syndicate after their aide (name supplied) was caught at the Robert Mugabe International Airport after a bag mix-up.

The ivory was being spirited to China.

Presidential luggage is not subject to airport checks but the ivory bag was carried by an aide who was intercepted by his bosses following a tip-off.

The case died a natural death.

A damning report was written by a provincial intelligence officer who has since died nailing the Mugabes over illegal ivory shipping.

The aide who was caught with the ivory has since resigned from government service and is now part of Grace's private security.

Grace was also accused of using senior managers at Zimparks to approve the export of ivory without following due processes.

The matter was once investigated in 2018 but again suffered a stillbirth.

Zimbabwe has been losing a significant number of elephants to poaching - a highly lucrative global business valued at around US$47 billion annually competing with human and drug trafficking.