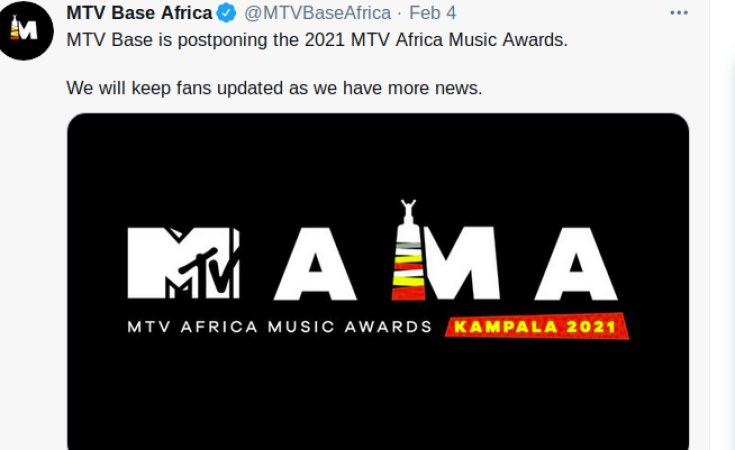 @MTVBaseAfrica/Twitter
A tweet by MTV Base Africa announcing the postponement of the 2021 MTV Africa Music Awards.
The Monitor (Kampala)
By Andrew Bagala

The MTV Africa Music Awards (MAMA) that were expected to be held in Uganda this month have been postponed.

Uganda Tourism Board chief executive officer Lilly Ajarova yesterday said the postponement was due to Internet "issues" and the coronavirus pandemic.

"There was a discussion about the postponement of the event. We still have issues with the Internet yet the event is supposed to be virtual. There was an issue of coronavirus," Ms Ajarova said.

Uganda blocked social media platforms such as Facebook and Twitter, and later shut down the Internet on allegations that communications during the 2021 General Election last month would endanger security.

Internet has since been restored but social media platforms remain closed.

"MTV Base is postponing the 2021. MTV Africa Music Awards. We will keep fans updated as we have more news," MTV Base Africa tweeted yesterday.

The awards are intended to showcase creativity and talent of African artistes.

Several Ugandan artistes were nominated in the MAMA awards, including Bebe Cool, Sheebah and Daddy Andre.

Pro-event activists, especially supporters of the National Resistance Movement (NRM), have been promoting it on social media while those against, especially human rights activists and opposition supporters had been lobbying for its cancellation due to violence in the recent general elections. The government allowed the Independence monument in Kampala City to be covered by the MAMA Awards design as a way of promoting the event.

"I can't thank MTV enough for postponing these awards. Great move. I am sorry, I love the music industry so much. So I couldn't hold back the excitement and that note I will be handing over to the next president soon," Ykee Benda tweeted.

Bobi Wine's United States lawyer Robert Amsterdam has been campaigning against the hosting of the event in Uganda citing the human rights record of the country.

"Another major difference is that role of U.S multinationals like MTV in reputation laundering a regime of violence, torture and kidnappings #MTVMAMA #UgandaIsBleeding," Mr Amsterdam tweeted.

Human rights activist and founder of Vanguard Africa, Jeffrey Smith said: "Now is not the time to #VisitUganda, nor to hold the #MTVMAMA's, which is being organized by @MTVBaseAfrica to "celebrate" art and free expression. Meanwhile in #Uganda: Stella Nyanzi (poet) is in exile; Nubian Lee (musicians) is jailed; and Bobi Wine (musician) is barred from performing."