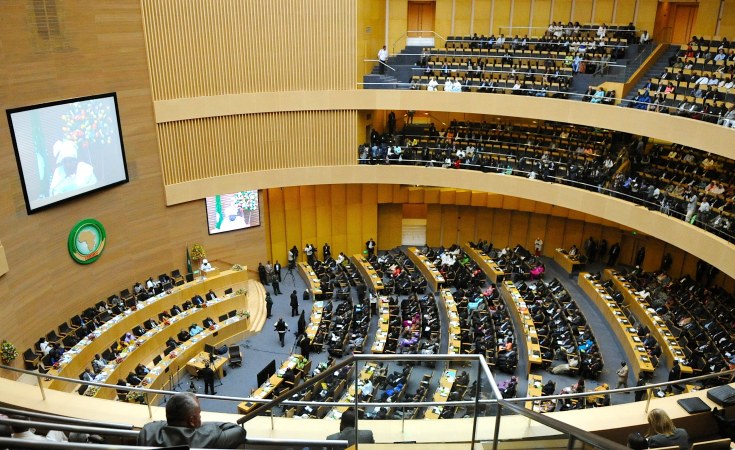 The African Union Assembly of Heads of State and Government has re-elected Chadian Moussa Faki Mahamat as the African Union Commission Chairperson for another four year term. The election took place during the ongoing 34th Ordinary Session of the AU virtual Summit today 6 February 2021.

Chairperson Faki will be Deputized by Dr. Monique Nsanzabaganwa from Rwanda who secured a two-thirds majority votes of forty two (42) votes during the election, in a highly contested position from another two female candidates. Dr. Monique becomes the first female to occupy the position of the Deputy Chairperson.

Faki sought a second term mandate for the position following the lapse of his first term of the Commission's leadership that came into office in January 2017. According to the Constitution Act of the OAU now AU, the Chairmanship of the AU Commission is for a period of four years mandate renewable once. The 2021- 2024 elections of senior leadership for the AU Commission also filled the positions of some Commissioners. (The complete list of elected officials will be posted on the AU website: www.au.int ) .

From Zambia, Amb. Albert Muchanga was re-elected to the post of Economic Development, Trade and Industry and Mining docket.

From Egypt, Dr. Amani Abou-Zeid was also re-elected to continue serving in the Infrastructure and Energy docket.

Amb. Bankole Adeoye was voted unanimously with 55 votes to take the helm of the Political Affairs, Peace and Security docket.

Elections for the posts of Health, Humanitarian Affairs and Social Development; and Education, Science, Technology and Innovation were postponed to the next meeting of the Executive Council. The incumbent Commissioners H.E. Amira Elfadil and Prof. Sarah Agbor respectively, will continue to serve in their current positions until the elections are conducted.

The elections demonstrate progress on the implementation of the Institutional Reforms of the Union adopted in 2018 directing that from 2021, the Commission shall be composed of eight members - the Chairperson, Deputy Chairperson and six Commissioners from the previous ten member Commission. The reforms also included decisions to enhance the transparency and meritocracy of the Leadership selection process, with a Panel of Eminent Africans tasked with the Pre-Selection process of the Senior Leadership Positions of the African Union Commission. The selection principles were based on equitable regional representation, gender parity, predictable rotation, attracting and retaining Africa's top talent, accountable and effective leadership and management, and transparent and merit-based selection. This is the first time, in the history of the African Union, that the elections have been held virtually occasioned by the containment measures instituted due to the COVID-19 pandemic.

Find the African Union Commission End of Term Report 2017-2021 on the past four years of the AU Commission and recommendations for the Union in charting the future.

President Felix-Antoine Tshisekedi Tshilombo, Takes Over As the New Chairperson of the African Union (AU) for 2021

Next Story
Tagged:
Copyright © 2021 African Union. All rights reserved. Distributed by AllAfrica Global Media (allAfrica.com). To contact the copyright holder directly for corrections — or for permission to republish or make other authorized use of this material, click here.