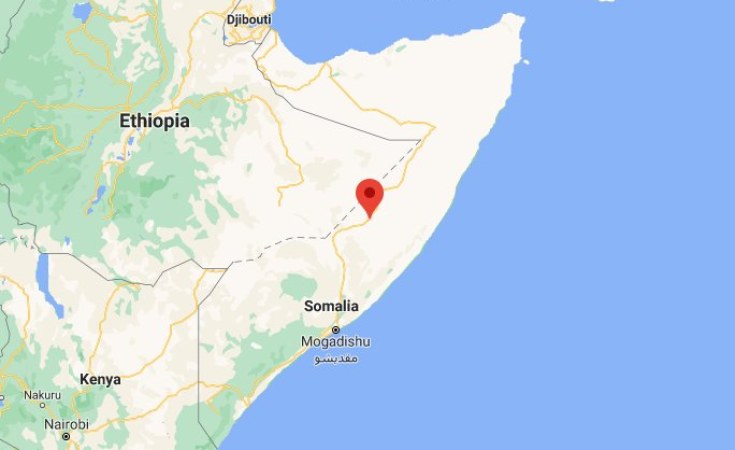 The attack took place shortly after negotiators failed to end a stalemate over the selection of a new president. Islamist terror group Al-Shabaab took responsibility for the attack near the town of Dhusamareeb.

At least 13 members of Somalia's security forces were killed on Sunday in a roadside bombing attack, shortly after emergency talks between Somalia's politicians failed to end a stalemate over how to select a new president.

The bomb hit a convoy belonging to regional intelligence units of the Galmudug state, senior military official General Masud Mohamud said. The convoy had been traveling near the town of Dhusamareeb, which had hosted talks over Somalia's delayed election.

Talks ended without a conclusion on Saturday, just days before the term of President Mohamed Abdullahi Mohamed was set to expire.

"We are getting terrible reports that 13 security men are all killed in the blast which destroyed their vehicle in the Galmudug province," said Mohamud.

Among those killed was a senior regional intelligence officer. The Islamist terror group Al-Shabaab claimed responsibility for the attack on its Andalus radio station. The group has ramped up attacks in the Galmudug state in central Somalia as the country's leaders gathered in Dhusamareeb, north of the capital Mogadishu.

Somalia is likely to miss a February 8 deadline to choose a new head of state, after several days of negotiations between the central government and federal states broke down.

Without a resolution, the breakdown in talks could create a constitutional crisis in country that is already confronting a violent Islamist insurgency and widespread food shortages.

Mohamed flew back to the capital, Mogadishu, without a deal on the staffing of regional electoral commissions, Osman Dube, the information minister, said late on Friday.

"No agreement was reached," said Dube. "The government offered to negotiate and settle all the disputed issues, but some brothers have failed to understand, and refused to resolve the issues."

"The government has shown flexibility to compromise, gentleness and readiness to negotiate, but some leaders tried to exploit that openness to seek more. That will not work," he added.

Mohamed, who is currently seeking a second term in office, later told lawmakers that there was still one more chance for a deal, without offering further details. "If it fails again, then the decision [on the way forward] will be for the parliament," he said.

Another round of talks possible

The president is expected to announce another round of talks at a joint sitting of parliament on Saturday. He reached an agreement with the leaders of Somalia's five semi-autonomous regions in September, to hold parliamentary and presidential elections in late 2020 and early 2021.

However, the deal broke down after lawmakers couldn't agree on how to conduct the election process.

Somalia earlier aimed to hold its first direct election since 1969, but opted instead for an indirect voting system where special delegates chosen by clan elders pick the country's lawmakers, who in turn choose the president.

However, even under that system, regional authorities in at least two of Somalia's five federal states, Puntland and Jubbaland, opposed holding the election.

Puntland Not to Recognize Farmaajo Presidency From Monday