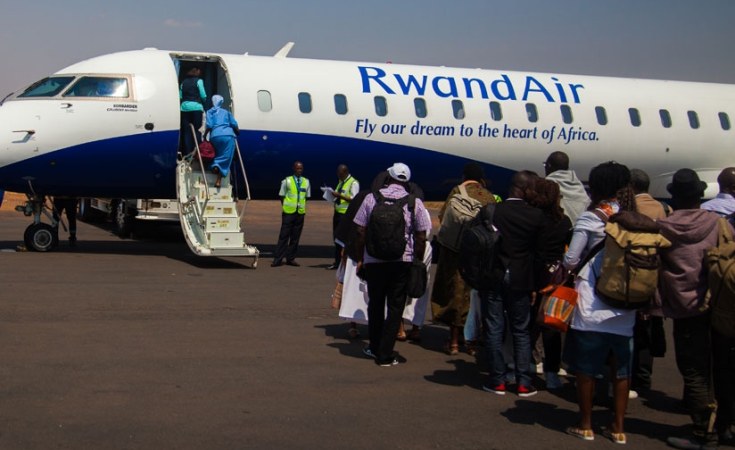 RwandAir, the national carrier, has suspended flights to three southern African countries amid concerns over a new Covid-19 variant there.

According to a statement released on Sunday, February 8, suspended routes include Johannesburg, Cape Town, Lusaka and Harare.

"Scheduled flights will resume as soon as there is more clarity on the situation", the airline said in a statement posted on Twitter.

"Affected customers can rebook and fly at a later date at no additional cost or request for a fund," reads part of the statement.

Reports indicate that South Africa, was among the countries which detected new variants of Covid-19, a few weeks ago. Other countries include Brazil, Britain among others.

However, with the variants spreading across the Southern Africa region, experts say that this will arguably make the fight against Covid-19 more demanding.

South African government has already put its roll-out of the Oxford-AstraZeneca vaccine on hold after a study showed "disappointing" results against its new Covid variant.

South Africa received one million doses of the AstraZeneca jab and was due to start vaccinating.

Scientists say the strain accounts for 90% of new Covid cases in South Africa.

After months of lockdown last year, RwandAir resumed commercial flights in August 2020 across its global network, including most of its African routes, as well as some long-haul destinations such as London Heathrow, Brussels and Dubai.

The airline recently launched its twice-weekly flights to Central Africa Republic's capital Bangui as part of its recovery strategy from the impact of Covid-19 pandemic.

All passengers arriving in Rwanda are required to present a negative Covid-19 PCR test taken within 72 hours of boarding their flights.

Upon arrival, they are required to self-quarantine for seven days and take a free of charge PCR test at the end of this period.