The Magh Mela, an annual pilgrimage to Prayagraj, India, which usually attracts over 100 million visitors, is not only the greatest Hindu religious festival but also the world's largest gathering of people.

Declared by Unesco as an intangible cultural heritage in 2017, the 45-day festival which usually begins in mid-January, is a mixture of religious ceremonies and elaborate rituals carried out on the confluence of three holy rivers -- Ganga, Yamuna and Saraswati.

The pilgrims bathe in the sacred waters every day to cleanse themselves from their sins and get a liberation, which gives them a re-birth.

In mid-December 2008, two wealthy Kenyans flew from Nairobi to Prayagraj, hoping to cleanse themselves from their sins.

A combination of greed, mischief and corruption orchestrated by their company, in collusion with government officials over eight months, had created a massive fuel shortage, prompting complaints by oil marketers and banks.

Yagnesh Mohanlal Devani and Mahendra Pathak needed not just spiritual cleansing but they were also looking to buy time as they negotiated their way out of the scandal. Their company, Triton, had been placed under receivership for non-payment of debt but there was more coming.

The grand coalition government, which was eight months old, was just about to face its third scandal after the Grand Regency and maize scams. The two architects of the scam somehow knew what was coming. Some 126 million litres of fuel worth Sh9 billion had disappeared into thin air during the short time the grand coalition government had been in power. Donors were fuming and the government was about to be plunged into a political and economic crisis.

There had been a drought, which increased the reliance on thermal plants by KenGen to generate electricity. KenGen's main oil supplier, Total Kenya Limited, had a contract with Triton Petroleum Limited for supply of fuel, which it in turn sold to the government's main power producer.

"We have a contract with Triton to supply us with fuel, which we then supply to KenGen," Felix Majekodunmi, Total Kenya managing director, had told the media at the time.

"We gave them three months' notice after sensing the danger of not meeting the contract," said Mr Majekodunmi.

With the contract between Total Kenya and Triton being terminated, the nation was heading back to the power rationing days experienced during the Moi regime unless KenGen found a new fuel supplier. And time was running out.

Worse, an internal audit ordered by the Kenya Pipeline Company (KPC) into the disappearance of the fuel was about to be released to investigators. It had more shocking details on how the scandal was executed. Yagnesh Devani and Mahendra Pathak knew they had to be as far away as possible.

Yet to face justice

Whether they had been tipped about their impending arrest or not remains a mystery, 13 years later. But while Mr Pathak, who was Devani's right-hand man, did return to Kenya and is facing charges with regards to the scandal, Devani is yet to face justice.

Devani, 56, is Kenya's most wanted fugitive.

On May 26, 2011, he was arrested in London. However, for 10 years, Kenya has unsuccessfully tried to have him extradited to Nairobi.

There was a glimmer of hope that the extradition was finally happening last month but Devani, a proverbial cat with nine lives, appealed for the umpteenth time. But as he continues to hide in the UK, thousands of pages from confidential investigation files perused by the Nation show that the Triton scandal had all the ingredients that would make it almost impossible to bring Devani to book even if he was extradited to Kenya.

He was not only smart but he had an entry, operation and exit strategy from the time he registered Triton in 2000, eight years before the scandal.

The first thing that forensic auditors noticed was that despite running a multibillion-shilling business that had several subsidiaries, Triton rarely kept records, or they just vanished like the millions of litres of petroleum the company was accused of stealing.

"Our high review of Triton files revealed a lot of information gaps. There appears to have been no filing system, hence making it difficult to identify relevant information," says a confidential forensic audit dubbed Project Bahari done by Price Water House Coopers (PWC), which investigators relied on.

"Most of their documents could not be traced at all, while others had not been properly filed hence making the verification exercise very difficult," states the audit report that we have obtained.

KCB Bank, which also lost billions of shillings as Triton's main financer, also refused to cooperate with auditors, citing client confidentiality. The bank said the matter was already in court at the time.

In the absence of crucial information from the main players and victims of the scandal, the causalities of the scam turned out to be junior officers at Kenya Pipeline Corporation.

That was how the scandal was designed and it began with the registration of Triton with Devani as its executive chairman. At the time of registration, he held 4,999,500 of the total share capital of five million shares. The remaining 500 shares were held by a company called Triton Business Solutions.

At the time, the petroleum importation and marketing business was controlled by multinationals. The entry of Triton, a local company, was seen as a step in the right direction and Devani - a flamboyant businessman - was just about to multiply his fortunes.

Before that, he had been involved in the running of Triton Bulk Storage, Triton Gas Stations Limited, Triton Service Stations and Triton Network Solutions Limited, which had shares in Triton Petroleum Company Limited. Like all the businessmen who want to hide their wealth, all these businesses owned by Devani had some form of cross ownership with each other.

Apart from being a skilled businessman, Devani was also a shrewd political operator who maximised on the Moi regime's love for Indian businesses. This enabled his companies to continuously win lucrative tenders to supply petroleum products to Kenya Power and Lighting Company for several years until President Moi left office in 2002.

So good were his fortunes that at some point, Devani was the local partner of The Reliance Consortium (led by India's largest private telecom service provider, Reliance Telecoms), which at one point was said to have bid to buy a stake in Telkom Kenya for Sh12 billion.

But in a country where all the richest people are players in either logistics, government tenders or oil importation, it was Triton Petroleum Company Limited that pushed Devani into the big league. Kenya imports about Sh6 billion worth of petroleum products per month through an industry controlled by a few players.

Soon, politicians were scrambling for Devani's attention. So influential was he that a 2006 ceremony to open Triton's LPG depot in Nairobi was attended by then Vice-President Moody Awori and several Cabinet ministers, including Mr Raila Odinga and then-opposition leader Uhuru Kenyatta.

A widely circulated photo of Devani, Mr Odinga, Mr Kenyatta and Mr Awori toasting to champagne during the event remains a painful reminder of the event, which was organised by a person who would in later years turn out to be the nation's most wanted fugitive. But with such political connections, it was not difficult for Triton to convince KPC to allow it to use its facilities to receive, store, transport and deliver petroleum products that it imported to Kenya.

"The agreement was known as 'Transport and Storage Agreement' (or TSA). It was replaced by a further TSA dated March 2, 2007," reads court papers filed in London in the decade long saga.

The deal was first signed on December 8, 2001 less than a year after Triton Petroleum Limited was formed. With no infrastructure of its own, Triton would for the next four years use KPC facilities to import petroleum which it mostly re-sold to Kenya Power.

Why Kenya Power opted to purchase fuel from a third party supplier instead of directly importing from oil marketers is still an unanswered question. What is clear is that Triton Petroleum Limited did make billions of shillings from this arrangement during the final years of the Moi government.

Many thought Moi's exit from power in 2002 would dim the Devani empire like it did to other Indian-owned businesses, which controlled the economy during the '80s and '90s. It did not. A skilled tenderpreneur and political operative, Devani waited on the side-lines for his next big chance and it came just two years after President Mwai Kibaki was sworn in.

An improving economy under the National Rainbow Coalition (Narc) government meant a sharp increase in the demand for petroleum products. The Kenya Petroleum Refinery in Mombasa, which was providing 40 per cent of the local demand, was finding it hard to meet the eight million litres of petrol that it was supposed to produce daily.

To address the frequent shortages attributed to inefficiencies at the refinery, the Narc administration decided to shift towards complete importation of refined fuel. While it sorted the issue of availability of fuel, this policy handed oil marketers a free range to push prices up any how they wanted.

This called for the introduction of another policy that would create price controls. This new policy called Open Tender System (OTS) was to enable indigenous oil companies compete for a tender that would allow them to access petroleum products at the same price from the international market. They would then sell the product to other companies.

Devani, who had been waiting on the side-lines as he managed his petrol stations, having lost the Kenya Power tender, finally got his chance. He would orchestrate the biggest petroleum scandal Kenya had ever seen.

How Fugitive Businessman Slipped Away From Two EACC Officials At Heathrow 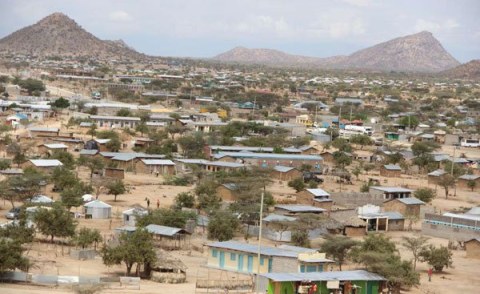