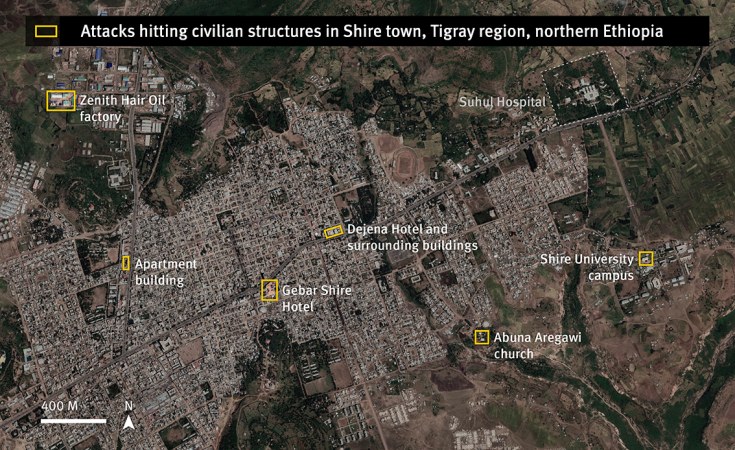 Human Rights Watch
Location of attacks, striking on or near civilian structures in Tigray
The Conversation Africa (Johannesburg)
interview By Eugène Bakama Bope

This has happened amid growing fears of a humanitarian catastrophe, following reports that Ethiopia was blocking humanitarian aid from reaching civilians in Tigray.

Moina Spooner, from The Conversation Africa, asked international law expert, Eugene Bakama, to explain what the legal implications of aid blockades are.

What obligations do countries have to allow the provision of humanitarian aid, and what laws hold them to these obligations?

Under international law, states have the primary responsibility to meet the basic needs of their civilians. Humanitarian organisations can offer their services to support aid efforts. This usually happens after an appeal by an affected country and with the country's consent.

But it doesn't always work like this. Sometimes international aid agencies - like the International Committee of the Red Cross - initiate action to deliver aid if they deem a situation to be dire. If a country refuses this and blocks humanitarian aid, this constitutes an internationally wrongful act. Perpetrators can be tried before national or international courts for violation of international law.

There are various reasons why aid blockades happen.

For instance, parties to armed conflict may try to prevent weapons and equipment from reaching enemy forces. In Yemen, for example, Houthi forces confiscated medical equipment intended to treat civilians.

Restricting food aid can also be a weapon of war. Undermining the ability of communities to access food makes them dependent on the state, or welfare agencies, and thus politically compliant.

The Geneva conventions and their protocols apply only in times of armed conflict. They seek to protect people who are not - or are no longer - taking part in hostilities. Today, some 194 states are party to the Geneva conventions. Ethiopia joined in 1969. It also signed up to the additional protocols in 1994.

In the case of Ethiopia, any blockades of humanitarian aid would have deepened the humanitarian crisis for civilians in Tigray. This would be a violation of international humanitarian law as it prevents the entry of essential items for a vulnerable group into areas controlled by armed forces.

Deliberate obstruction of the delivery of humanitarian aid, essential to the survival of a civilian population, would also violate international humanitarian law. Those responsible can be prosecuted in national and international courts.

Armed forces that control an area - as Ethiopia does with much of Tigray, including the capital, Mekelle - also violate international legal obligations if they do not quickly facilitate civilian access to humanitarian aid.

Humanitarian organisations have the right to offer humanitarian aid without this being considered as interference in the internal affairs of a state.

Who is responsible for investigating whether aid is being blocked?

The United Nations can use its agencies to investigate the matter. For instance, the UN's Human Rights Council can open an independent international investigation into abuses committed by parties to the conflict.

The International Committee of the Red Cross also has a legal mandate to investigate blockages of humanitarian aid.

What are the legal implications of blocking humanitarian aid?

By blocking humanitarian assistance, the state commits one of the most serious violations of international law: the right to life. This would constitute an international crime and those involved can be tried in local or international courts.

Other countries can, under international law, respond to this violation by taking the following actions:

Has this happened before? If so, where and what was the outcome?

Humanitarian blockades have happened before. In Yemen, for example, the Houthi armed group and forces loyal to former Yemeni president Ali Abdullah Saleh blocked and confiscated aid intended for civilians. They also imposed significant and unnecessary restrictions on aid workers, hampering delivery. The United Nations Security Council intervened in 2017 and - after diplomatic engagement - access to humanitarian aid was granted for civilians.

Another case of humanitarian aid blockade happened in Syria when the Syrian regime refused access to aid workers. In 2011, the Security Council unanimously adopted a resolution calling on the parties to ensure safe and unimpeded access to humanitarian agencies. The regime eventually allowed access.

To ensure that blockades don't happen in the future, it's important that all parties to conflict know their actions will have consequences. In addition, existing legal frameworks for access to humanitarian aid should be made widely known.

Where these laws are not tough enough to prevent aid blockages, I believe parties to the conflict should be forced with diplomatic or military action to allow humanitarian access.

No Comment Yet From Govt on Claims Forces 'Shelled Civilians'