Egyptian Exceptionalism in a Chinese-Led World 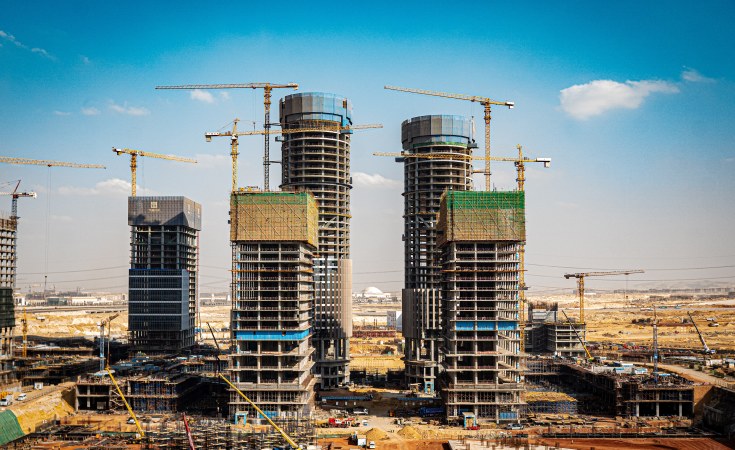 Despite huge economic cooperation and unrestrained reciprocal praise, Egypt and China's relationship is more complex and unilateral than either would admit.

When Cairo dispatched its minister of health Hala Zayed along with some medical equipment to Beijing to express solidarity with China in its battle with COVID-19 back in March 2020, the Egyptian government was beaming with pride - both publicly and privately - having found an opportunity to show support to the country that 'has been our ally and generous friend through the years, and stood by us in international forums', in the words of one senior official.

Egypt was the first Arab and African country to establish direct diplomatic relations with the China in 1956 and, just weeks later, Beijing gave its first-ever foreign grant offering $4.5 million to Egypt during the Suez Crisis - a minute amount as far as international aid goes, but one full of symbolism.

In the ensuing decades, the relationship endured and remained positive, growing under Mubarak and skyrocketing under President Abdel Fattah Al-Sisi who was more than a little wary of Egypt's Western partners due to their pro-democratic positions, and was seeking to diversify the palette of Egypt's alliances.

Political scientist Nael Shama explains this as being 'a direct result' of Egypt's dissatisfaction with the US administration's reaction to the regime changes of 2011 and 2013, with Egypt's political leaders feeling that 'putting all eggs in the American basket was not sufficient'. At the time, China was just launching its Belt and Road Initiative (BRI) and beginning to target key regional partners.

The 'big bang' moment came in 2014, with President Al-Sisi's first visit to China, and the signing of the Comprehensive Strategic Partnership (CSP). Since then, Al-Sisi has visited China six times in as many years and signed at least 25 bilateral agreements. For comparison, Mubarak also visited China six times but over the course of his entire 30-year rule.

Although the heart of Sino-Egyptian relations is economic, is it sustained by political considerations. Chinese negotiators and investment firms are firmly nudged to pursue closer relations with Egypt, but they will not do so at any cost, while Egyptian senior officials and trade negotiators have stated dealing with China is not easy, with negotiators being described as slow in their processes and with far more documentation needed than other countries.

Unlike many bilateral donors who seek to streamline relations with the countries they operate in and therefore establish a standalone and accessible office - such as USAID, the UK's FCDO, France's AFD - China's International Development Cooperation Agency (CIDCA) has no such representation in Cairo. Instead there is a 'single point person', the economic counsellor at the Embassy.

Egyptian ministries admit that if China had an institution based in Egypt, it would make their lives much easier, as each would be much more aware of other Chinese-Egyptian cooperation projects, which is currently not the case.

Egyptian officials have to systematically approach negotiations with more than a little wariness - when the Chinese asked for government-owned assets to be used as collateral for the electric train project, it was rejected. A ministerial committee reviewing foreign debt was established in February 2013 and is kept abreast of Chinese investment negotiations to avoid various ministries signing separate deals with Chinese entities and accumulating bad debt.

Politics have kept some Chinese engagements in Egypt going even when the economics pointed otherwise, such as the revolving door of Chinese partners in Egypt's New Administrative Capital project. Since the first MoU was signed between Egypt and the China State Construction Engineering Corporation (CSCEC), Beijing's support has remained consistent even when the return on investment was not.

During his January 2016 visit to Cairo, Xi Jinping signed $15 billion worth of deals, partly to be invested in the infrastructure of the planned new administrative capital, and when Al-Sisi returned the visit in September 2017, $11.2 billion in projects were agreed, most notably the electric train connecting the new city to Cairo.

In February 2017 the CSCEC withdrew from the MoU, due to the collapse of the Egyptian pound, only to be marched back to the agreement in 2018 under the patronage of its government. Song Aiguo, China's ambassador to Cairo, attended the signing and highlighted the deal's importance for the BRI framework.

Other actors - most notably the Industrial and Commercial Bank of China (ICBC), the Export-Import Bank of China (EximBank), the China Fortune Land Development Company (CFLD) - have also signed various agreements with Egypt, but financial disagreements then proved too onerous to iron out, and some were suspended or scrapped.

Making the best of disproportionate relations

With Egypt representing less than five per cent of China's trade with MENA countries and only one of almost 140 countries to have signed an MoU, it is unsurprising Beijing has a disproportionate say on the parameters of the bilateral relationship. Egyptian officials and negotiators make the best of an agenda which they have, in effect, little say in.

However Egypt does represent 35 per cent of China's trade with North Africa giving it a potential opportunity for regional leadership with Beijing. But Egypt has never really been in the habit of considering North Africa as a standalone zone of influence or cooperation, even when opportunities for regional cooperation and synergies do occur.

While Sisi stated that the need to 'synergize the development strategies and take advantage of the building of infrastructures and cooperation on capacity to make Egypt a supporting country along the Belt and Road', it is unclear how this would translate into actual policy. Or, more significantly, if anyone in government is clear on how Egypt would like to position itself with the BRI.

The New Administrative Capital is just one of many Chinese investments in Egypt, and China is also Egypt's first source of imports, dominated by electrical and electronic equipment. With Egypt's exports to China more than doubling between 2010 and 2018 - crude oil, fuel, and distillation products make up 73 per cent - and Cairo's debt to Beijing also on the rise with Egypt estimated to have borrowed $3.4 billion from China between 2000 and 2017, this is a relationship which is clearly growing, not shrinking.

This could therefore mean there is ample room for Egypt to properly formulate its priorities within the alliance, and China's explicit political commitment should provide Cairo with some reassurance that room for negotiation is present. After all, no-one yet even knows if Egypt can lead this bilateral relationship. 'I don't have the full picture' one senior government official told me. 'If the Egyptian government asks for something I don't think the Chinese would reject it. But this hasn't posed itself yet.'