South Africa: Ramaphosa Has Failed to Protect the People, Economy and Democracy of South Africa. 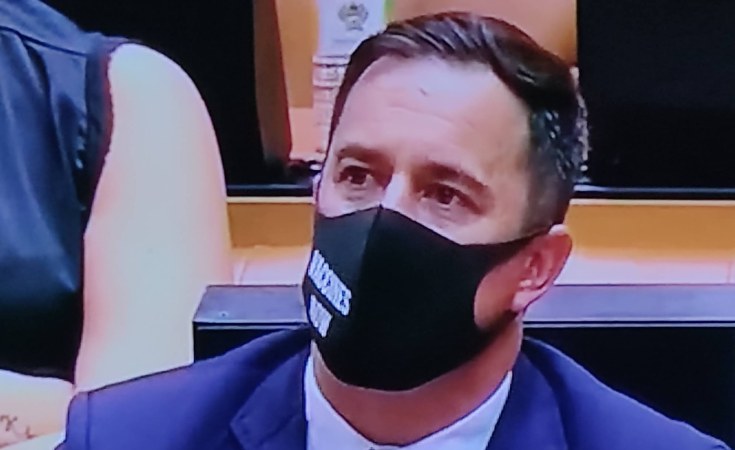 South Africa is in deep, deep trouble. We're a bus accelerating toward a cliff. People are suffering terribly and much more suffering is on the horizon. Lives are at stake. The situation is truly urgent. It calls for radical action that goes to the heart of the problem, which is an over-controlling, incapable, unaccountable state.

Tonight, we needed to hear about real progress on real solutions to our real challenges.

We needed to hear the practical steps that are being taken to roll out vaccines, get our economy growing, and restore the political accountability that is essential in a democracy.

Yet, President Ramaphosa remains a spectator president looking on with dismay as if he has no personal agency to alter the tragic course of events unfolding in our beloved country.

He is not steering the ship to calmer waters. It is not even clear he is at the helm.

Three crises are crippling South Africa: the Covid crisis, the economic crisis, and our crisis of democracy.

In the run up to the SONA, the DA set out the obvious solutions that must be implemented if South Africa is to overcome these crises. We hoped Ramaphosa would report progress on these solutions.

Mostly, he failed to do so.

Ramaphosa failed to make the commitments that will ensure a rapid vaccine rollout.

The result: South Africa's vaccine rollout will be neither rapid nor efficient. South African lives and livelihoods will be lost unnecessarily as the virus continues to spread though the population in successive waves, and as the government continues to use the blunt instrument of blanket restrictions to try to control it.

Yet he failed to deliver an economic growth agenda. He failed to make it clear to the nation that the people who start and build productive enterprises are the good guys, not the bad buys.

And he failed to announce progress and action on making it easier to do business in South Africa. Even though most of these action steps simply entail getting his government to move out of the way.

His government will continue to be like a massive roadblock on the path to progress, blocking entrepreneurs and the poor, and extracting payments from all who try to pass.

He has failed dismally to ensure an affordable, reliable energy supply. This month we can expect stage 6 and maybe even stage 8 load-shedding despite Ramaphosa's 2015 promise that: "in another 18 months to two years, you will forget the challenges that we had with energy and Eskom ever happened". Municipalities and large firms are still not allowed to purchase power directly from independent power producers, despite a commitment in last year's SONA. Households and businesses are still not free to produce as much power as they like and feed excess power into the grid. The ANC government is literally a deadweight pulling businesses and households down as they try to move up.

He failed to reject his "Suicidal Six" investment-killers that make up the ANC's control-and-extract patronage machine. They are why skilled people are leaving South Africa in droves, leaving our tax base half what it was three years ago. And why our foreign direct investment plunged by 46% in 2020 compared to only 11% for Sub Saharan Africa:

He failed to announce the reforms that could double the number of small businesses in South Africa. So, our percentage of employed who are self employed or employers will remain 20%, which is half that of our peer countries where 40% is the norm. Therefore our unemployment will remain unnaturally high, as it has been for 20 years now.

He failed to commit to the actions necessary to get our debt under control. Therefore, while we are currently spending R1 in every R5 on servicing debt, it will soon be R1 of every R2. Money for basic services, health, education, policing and grants will dry up.

Let's call Ramaphosa's public sector infrastructure drive out for what it really is: the ANC's second wave of state capture, loading. Because the same cadre deployment and "empowerment" policies that destroyed our infrastructure will now be deployed in its rebuilding.

The result: South Africa can expect no private investment in productive enterprises, so no new job creation. We can expect unemployment and crime to remain unnaturally high and tax receipts to continue falling as skills and capital flee South Africa. Our credit rating will slip deeper into junk status. So we'll pay more and more for the R2 billion we borrow every single day to fund the ANC's public sector patronage requirements. As our debt spirals, we should expect the bus to go over the cliff 3 to 7 years from now in the form of a sovereign debt crisis, and all hell to break loose.

He failed to commit to, or even show support for, the electoral reform necessary to give Parliament real teeth to hold the executive to account. The DA has long called for a hybrid electoral system where at least a portion of MPs are elected directly by voters, and thereby incentivized to show loyalty to people rather than party. The remaining portion of MPs could still be elected through a system of proportional representation to ensure minorities are fairly represented in Parliament. DCJ Zondo recently echoed this call, as the only way to build real political accountability in South Africa. Under a hybrid system, Zuma would not have survived eight motions of no confidence, and Parliament would be focused on protecting people, not the ANC. Which is why Ramaphosa said not a word about it. Party over country every time.

He failed to commit to ending the ANC's policy of state capture, which is what their explicit policy of cadre deployment is explicitly intended to achieve. Even though this is quite clearly unconstitutional. This makes a lie of his commitment to building a capable state. A commitment echoed in the National Development Plan. Yet while ANC cronies are appointed to positions of influence within all institutions of the state, the state will remain not just incapable, but also corrupt and uncaring. Our schools will continue to suffocate under the boot of SADTU.

He has not made enough progress on corruption. In his first SONA three years ago he promised to strong action against corruption. Yet not one single high-profile ANC cadre has been convicted, despite theft of R1.5 trillion from the people of South Africa. And in fact, many of the worst offenders such as David Mahlobo and Gwede Mantashe are still in his cabinet.

These three central crises will not be resolved. The South African bus will continue accelerating toward the cliff. The unnecessary suffering will continue and worsen. Youth unemployment will grow even higher than 70%. Our debt will grow. Cities will crumble. Shops will shutter. Inequality will widen. Our democratic protections will continue to erode. ANC cronies will grow fatter. Instead of a new dawn we have old nightmares.

This is the ANC's legacy of elite extraction, brought to you with a smile and a tear by Cyril Ramaphosa.

How inappropriate to quote Maya Angelou's poem "Still I Rise" while holding the country down with an authoritarian boot on its neck.

Just as fynbos needs fire every twenty years to renew itself, our country needs a similar blaze of renewal, in the form of a new government, if it wants to bloom.

Ramaphosa's 2021 State of the Nation Address Signals Tough Times Ahead