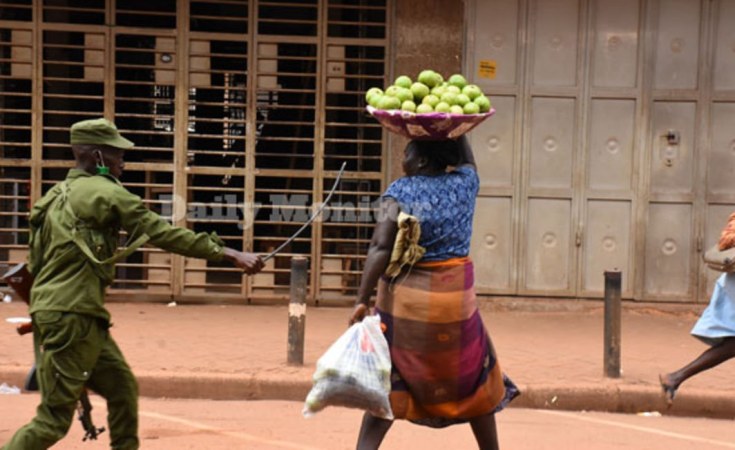 Alex Esagala/Daily Monitor
A Local Defence Unit (LDU) recruit whips a fruit vendor in Kampala on March 26, 2020 as they enforced a directive from President Yoweri Museveni.
The Monitor (Kampala)
By Frederic Musisi

The UK Under-Secretary of State for Africa, Mr James Duddridge, announced the freezing during a House of Commons parliamentary session on Wednesday in response to a question by Shadow MP for Africa, Mr Stephen Doughty, on Downing Street's stand on the situation in Kampala.

According to the House of Commons' Hansard, Mr Duddridge said the decision to freeze funding was in response to disproportionate response by the Ugandan security services to political protests in November.

"We took the decision to pause funding of three projects totalling £40,909 which were working directly with the Ugandan security services," Mr Duddridge said.

"In addition to the wider UK overseas development assistance review, we are currently reviewing UK aid spend in Uganda, including the permanent status of the above projects," he added.

Information and National Guidance minister Judith Nabakooba did not immediately respond to our repeated calls and messages for comment on the matter. Ministry of Foreign Affairs officials were not readily available either.

The Stockton South constituency MP, Paul Williams, however, called for more action by the UK government.

"The international community should be isolating President Museveni for his actions. Instead the UK is making largely symbolic gestures. It's time for the UK, US, EU and AU to join the millions of Ugandans who voted for change and say enough is enough," Mr Williams said. "We should be calling for Museveni to step down and for truly independent elections to be run in a free and fair climate so that the will of the people of Uganda can be heard. Until that happens all military, development and other co-operation and support should cease."

On November 18 and 19, spontaneous protests broke out in different parts of the country following the arrest of the National Unity Platform Opposition presidential candidate, Robert Kyagulanyi, alias Bobi Wine in Luuka District, during which 54 people lost their lives, dozens were injured, and some 836 suspects arrested many of whom are still in detention without trial in court.

Who is Mother of Ugandan Prince?
Food and Agriculture