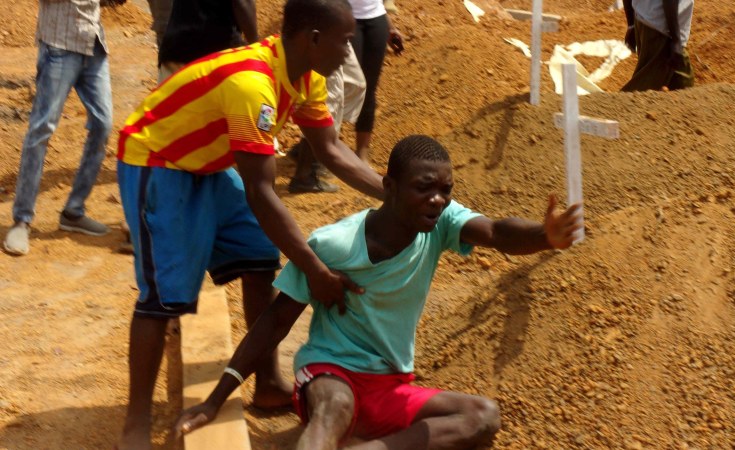 Ebola Deeply
The brother of the victim of an earlier Ebola outbreak in West Africa breaks down at his graveside.
The Nation (Nairobi)
By Kemo Cham

Freetown — Guinean authorities on Saturday said four people had died from suspected Ebola virus complications, sparking fears of the return of the deadly viral disease in West Africa, four years after the world's largest outbreak of the disease in the sub-region.

The Guinean health ministry said the deaths and about four cases were reported in Gueckedou in the south of the country, close to the borders with Liberia and Cote d'Ivoire.

At least one person is hospitalised in the country's capital, Conakry, for treatment, officials said.

The Minister for Health Rémy Lamah was quoted by local media saying that they were awaiting a second test of results to confirm whether it is Ebola or not.

The National Agency for Health Security (ANSS) said preliminary investigation points to a case of a nurse who fell ill towards the end of January and died between the January 27 and January 28. The victim was reportedly buried in February.

Eight of the people who attended the nurse's burial reportedly exhibited Ebola symptoms -- diarrhoea, vomiting and bleeding. Three of them died and four were hospitalised in N'Zerekore.

Officials said the eighth person escaped and was latter caught and put under treatment in Conakry.

Sory Keira, head of communications for the ANSS, told Guinéenews that the samples collected from the victims were first tested in a European Union-sponsored laboratory in Gueckedou and found positive, noting that specimen from the same samples had been sent to Conakry for a second confirmatory test, in line with protocol.

"We have a reference laboratory in the forest area, precisely in Guéckédou, which tested the two suspected cases and which revealed a positive result. The protocol indicates that the results should be confirmed in another laboratory," he said.

The ministry said a final result is expected by afternoon on Sunday.

The revelation has sparked fears in Sierra Leone, which also shares a border with Guinea. Alongside Liberia, the three neighbouring countries were the scenes of the world's worst Ebola outbreak that lasted for three years (2014-2016).

The Sierra Leone government is yet to make any comment on the development, but activists are calling for rapid response to prevent a spillover.

Dr Alhaji Umar Njie, a scientist, described the development as "worrying but not surprising," while urging for calm.

"What is highly important at this point is for our Mano River Union (MRU) countries to act fast and in coordinated manner to contain the outbreak," he noted in a social media post late Saturday, calling for "heightened coordinated epidemiological surveillance, contact tracing and restricting movements into and out of the border red zone areas".

The 2014 Ebola epidemic also started in Guinea and spread to Liberia before entering Sierra Leone. It ended up been declared by the World Health Organisation (WHO) as an international public health emergency, after it spread to seven other countries worldwide, including the United States and Europe.

But most of the cases and deaths were concentrated in the three neighbouring MRU countries due to their weak health systems. And Sierra Leone and Liberia were the two worst affected among the three in terms of both number of cases and fatalities.

The three countries had hardly recovered from the effect of Ebola when the ongoing Covid-19 pandemic erupted.

Sierra Leone is currently going through a second wave of the pandemic.

WHO Staff Are On the Ground in Guinea