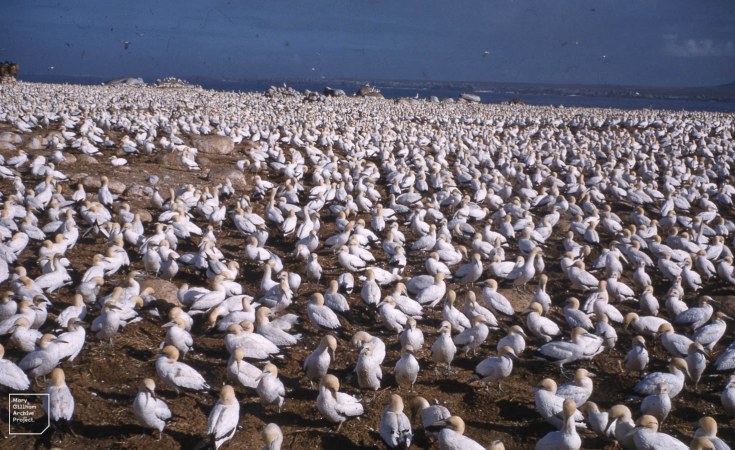 A team of scientists has discovered that endangered Cape gannets, which live and breed in large colonies in southern Africa, use unique dances that could show mates and neighbours where to find food.

French scientists Nicolas Courbin and David Grémillet from the University of Montpellier and their team gathered data over four seasons on Malgas, a tiny flat round island at the mouth of South Africa's Saldanha Bay that is home to around 19,000 breeding pairs of Cape gannet.

Twenty-eight of these large white birds with yellow heads and pale dagger-like bills were tracked using GPS devices and the "ceremonial dances" they performed each time they returned to the colony were recorded on video.

Described by Courbin as a "change of guard at the nest", the dances involved 14 different displays including nape bites, sky-pointing with their bills, bowing and preening each other's feathers.

Cape gannets, which are related to Europe's Northern gannets, are famed for plunge-diving in their hundreds as they pursue sardines and other large shoals of fish. Crucially, the researchers found that birds who'd flown the furthest to feeding sites out at sea danced for the shortest times.

"Gannets that performed a long foraging trip had a subsequent shorter dance duration," Courbin told RFI, adding that long dances meant the gannets had travelled a short distance. "At some stage during the dance ceremony, the returning bird climbs onto the nest and takes over chick-guarding duties."

The preening of feathers also appeared to offer clues to mates and neighbours on the direction of food sources.

Gannets preened their feathers more during the dance ceremony if they had travelled to the west rather than to the south.

However, as the researchers note in a paper published in the journal Animal Behaviour, feather preening may have been less intentional in conveying messages, and more to do with the fact that the birds that flew to the west had fed on fishery waste discarded by trawlers fishing for hake -- and so had dirty feathers.

"Birds attending trawlers are more likely to come into contact with fish oil and other elements affecting their plumage, and we speculate that this might then lead Cape gannets to preen more often," they wrote.

The research pushes forward the scientific community's understanding of the benefits of colonial breeding and roosting by animals in general. It seems likely that Cape gannets use information from "informed peers" to find food that might quickly disappear.

Getting information on scarce food is crucial to Cape gannets, whose numbers have dropped by as much as 79 percent in recent years, according to BirdLife International.

The team hopes their findings will help them to keep tabs on changes happening in the birds' foraging grounds -- the cold nutrient-rich waters known as the Benguela Current that run along the west coast of southern Africa, from South Africa to southern Angola.

"Our aim is to run a long-term study on Cape gannets as ecological indicators of global change in the Benguela upwelling system, which is affected by climate change and fisheries," he said.

But while the gannets' canny use of "information displays" might help them find food in an uncertain environment, overfishing could be cramping their style.

"If birds are in a hurry to feed this may lead to a reduction in time available for information displays at the colony, which in turn may trigger a negative feedback loop on their population level foraging performance."