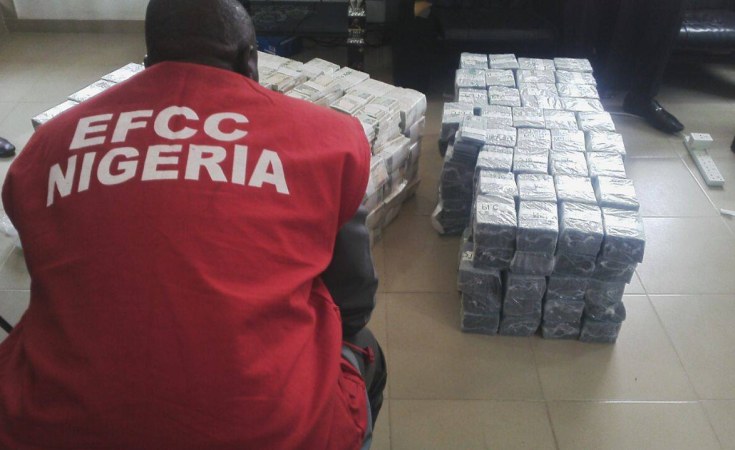 The 40-year-old who has spent all his work life at EFCC, joined the organisation in 2004.

Abdulrasheed Bawa, a Deputy Chief Detective Superintendent with Nigeria's flagship anti-corruption agency, the Economic and Financial Crimes Commission (EFCC), is set to break records if confirmed by the Nigerian Senate to lead the organisation.

A statement by a presidential spokesperson on Tuesday announced that President Muhammadu Buhari has asked the Senate to confirm Mr Bawa, who currently heads the Lagos zonal office of the EFCC, as the substantive chairman of the commission.

Mr Bawa was in October 2015 appointed to head the commission's investigations of Diezani Alison-Madueke, a former Minister of Petroleum Resources, and her associates.

He continues to play the role to date.

If his nomination to be substantive chairman of the EFCC sails through, Mr Bawa, born 40 years ago, will be the youngest person to ever lead the organisation which has been without a substantive head since November 2015.

Other previous substantive chairpersons of the EFCC as well as Ibrahim Magu, who chaired the agency in acting capacity for almost five years, stepped into the highly coveted office at well over 40 years of age.

The last substantive chairman of the EFCC, Ibrahim Lamorde, stepped into office at 49 years old on November 23, 2011, and left on November 9, 2015.

The immediate-past acting chairman of the organisation, Ibrahim Magu, who spent five years in office without Senate confirmation stepped into office at 53 on November 9, 2015 and was removed under controversial circumstances on July 7, 2020.

Aside from his record age, Mr Bawa, if confirmed by the Senate will be the first substantive chairman without a background in the Nigerian Police Force, a feature which appears to be in line with one of the reported recommendations of the Ayo Salami panel which investigated the commission and Mr Magu last year.

Mr Magu was suspended on July 7, 2020, to face the Salami panel after he was accused of corruption and insubordination by the Attorney-General, Abubakar Malami. The panel's report and recommendations are yet to be made public.

Mr Bawa who hails from Jega, in Kebbi State, is set to join a list of previous acting and substantive chairpersons of the organisation as well as the current acting chairman Mr Mohammed Abba.

The nominee graduated from the Usmanu Danfodio University, Sokoto, with a Bachelor of Science degree in Economics (Second Class Upper) in 2001.

Mr Bawa, who joined the EFCC as an Assistant Detective Superintendent (ADS) in 2004, also holds a Master's degree in International Affairs and Diplomacy which he obtained from the same university in 2012.

From his CV seen by PREMIUM TIMES, Mr Bawa has spent all his work life at the EFCC, and is currently pursuing a Bachelor of Laws degree at the University of London.

He was part of the pioneer EFCC Cadet Officers, course one, 2005.

He rose through the ranks to become a Deputy Chief Detective Superindent (DCDS), a position he has been holding since 2016 up till the time of his nomination as the anti-graft agency's substantive chairman.

With about 17 years working with the EFCC as a detective, Mr Bawa has vast investigation experience and has been part of prosecution of advance fee fraud, official corruption, bank fraud, money laundering and other economic and financial crimes related offences.

Mr Bawa was deployed to head the commission's operations zonal office in Lagos in August 2020 and remains in the position till date.

Prior to that time, he had headed the Capacity Development Division, EFCC Academy, Abuja from December 2019 to August 2020.

He headed the Counter-Terrorism and General Investigation/Pension Unit, of the Lagos Zonal Office from March to 2017 to May 2018.

He currently heads the Lagos zonal office, which without doubt, is the biggest operations zonal office of the EFCC with 604 officers working under him.

He has successfully investigated and testified in prosecution of many cases leading to convictions and recovery of looted monetary and assets across the world.

As the head of the EFCC's investigations of Mrs Diezani Allison-Madueke from 2015 till date, his team has recovered millions of dollars worth of property in Nigeria, U.K., U.S.A, and U.A.E including 92 of such assets in Nigeria.

He also supervised the investigations of Atlantic Energy Group-from 2014 to 2015 leading to the recovery of assets in Nigeria, UK, USA, Switzerland, UAE and Canada.

He also headed the investigations of Crude Oil Swaps and OPA case from 2014 to2015, also leading to recovery of assets.

Mr Bawa was also involved in the Petroluem Subsidy Fraud investigations from 2012 to 2015 during which fraud of about N70 billion was identified, funds recovered and many companies were prosecuted.

Another notable investigation, Mr Bawa has been involved in is one involving a former Governor of Niger State, Muazu Babangida Aliyu, who is currently facing trial.

He has also participated in several other periodic raids on "notorious (419) Cyber-cafés", the sort of operations from which the EFCC records the lion share of its convictions.

Excitement in EFCC Over Bawa's Nomination As Chairman

Nigeria President Okays Suspension of Crimes Commission's Magu
Tagged:
Copyright © 2021 Premium Times. All rights reserved. Distributed by AllAfrica Global Media (allAfrica.com). To contact the copyright holder directly for corrections — or for permission to republish or make other authorized use of this material, click here.