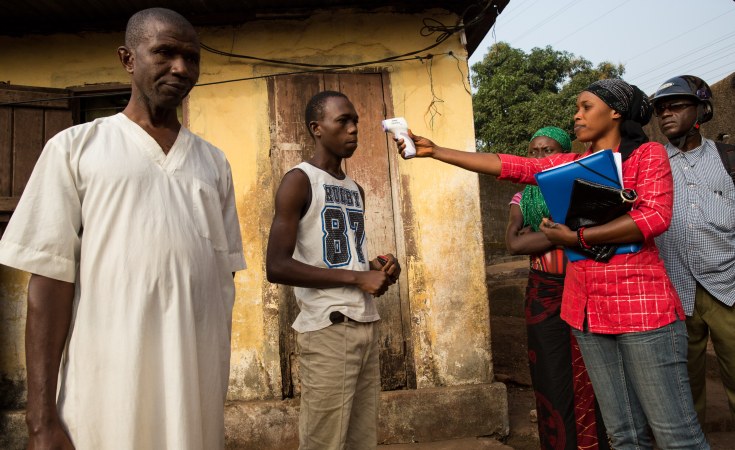 Martine Perret/UNMEER/Flickr
A team of contact tracers visits a community in Conakry, Guinea, on January 14, 2015 after a family member was infected with Ebola. A community workers, followed by a team of doctors, measures the temperature of a family member.
Thomson Reuters Foundation (London)
By Nita Bhalla

Nairobi — The Ebola virus has been detected in West Africa for the first time since the outbreak in 2013-2016. Here's a timeline of the key developments

Guinea and the Democratic Republic of Congo are racing to contain fresh outbreaks of Ebola that have killed at least four people, amid fears the virus could spread across the region.

It is the first time Ebola has been detected in West Africa since the world's worst outbreak in 2013-2016, which killed 11,300 people, mostly in Guinea, Sierra Leone and Liberia.

The world's second-deadliest outbreak was declared over last year in Congo, which has also witnessed a resurgence this month.

The World Health Organization has warned that the latest cases pose a risk to other African nations and require exceptional vigilance.

Below is a timeline of the main developments:

June 1, 2020 - Congo announces its 11th outbreak of Ebola since 1976, with a cluster of cases detected in its northwest Equateur province.

Congo is simultaneously battling the 10th outbreak in the northeastern North Kivu and Ituri provinces, which started in August 2018.

June 25, 2020 - Congo declares an end to the 10th outbreak in the north east, which was the second deadliest in the world, killing almost 2,300 people.

Nov 18, 2020 - Congo announces the 11th outbreak of Ebola in Equateur province is over, after just under six months.

Jan 28, 2021 - A nurse who is thought to been infected with Ebola dies in southeast Guinea's Nzerekore prefecture, near the border with Liberia and Ivory Coast - its first resurgence since the deadly 2013-2016 outbreak.

Feb 7, 2021 - Congo announces a 12th outbreak of Ebola after a woman died in Butembo city in North Kivu Province.

The WHO announces it is working with health authorities in Liberia and Sierra Leone to beef up community surveillance of cases in border districts and strengthen testing capacity.

The WHO also reaches out to Ivory Coast, Mali, Senegal and other countries at risk in the sub-region.

Congo reports a fourth new case of Ebola in Butembo.

Feb 15, 2021 - Guinea's Health Minister Remy Lamah says authorities are tracking down people who had contact with Ebola patients and will rush vaccines - the first of which won regulatory approval in 2019 - to the affected area.

Unlike during the 2013-2016 outbreak, Lamah said Guinea has the capacity to halt the virus' resurgence due to improved treatments.

The WHO launches an Ebola vaccination campaign in Congo's Butembo city. Health workers at Matanda health centre, where the first Ebola patient was treated, are first to be vaccinated.

(Reporting by Nita Bhalla @nitabhalla, Editing by Katy Migiro. The Thomson Reuters Foundation is the charitable arm of Thomson Reuters, and covers the lives of people around the world who struggle to live freely or fairly. Visit http://news.trust.org)

WHO Steps Up Efforts to Curb Ebola Outbreaks 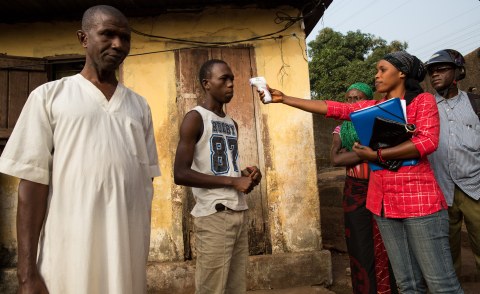 Tanzania On High Alert Over Ebola From DRC, Guinea
Tagged:
Copyright © 2021 Thomson Reuters Foundation. All rights reserved. Distributed by AllAfrica Global Media (allAfrica.com). To contact the copyright holder directly for corrections — or for permission to republish or make other authorized use of this material, click here.