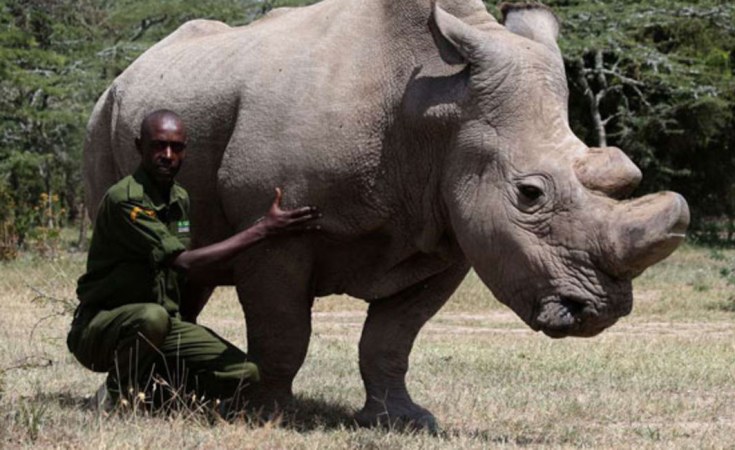 Veterinarians have successfully identified five female southern white rhinos at the Ol Pejeta Conservancy that are likely to carry a pregnancy as a surrogate mother of the northern white rhino subspecies that is on the brink of extinction.

Science has been the only hope for the northern white rhino after the death of Sudan, the last male of that species in 2018 aged 45. Another male northern rhino, Suni, died in 2014 at the age of 34.

Before the two male rhinos died of age-related and natural causes, scientists had extracted oocytes (eggs) from them at the Ol Pejeta Conservancy.

There are only two remaining female Northern White Rhinos in the world, Najin and Fatu -- aged 31 and 20 years respectively -- which live in the conservancy under 24-hour armed guard.

However, neither can carry a pregnancy, therefore the need for surrogate rhino mothers, including southern white rhinos, artificially inseminated with the carefully preserved sperm taken from Suni and Sudan.

Dr Stephen Ngulu, the wildlife veterinarian at Ol Pejeta Conservancy told the Nation that they have in the last two years conducted four procedures of collecting eggs.

"Out of the many oocytes that we have managed to collect, we have been able to successfully fertilise five of them and generate five viable embryos which are well stored in optimal condition. In in vitro fertilisation, we require the eggs and that is what the team has been focusing on," said Dr Ngulu.

"The plan is to have them (the five females) confined in a secure area where there are no Southern White Rhino bulls and ensure that they are not pregnant and they have never been pregnant," Dr Ngulu explained.

"We want to conduct an embryo transfer into the Southern White Rhino females so that they can carry the pregnancy to term which is usually a gestation period of 16 to 17 months," he added.

The veterinary boss said they use a sterilised Southern White Rhino so that they establish whether the females' uterus have the ideal environment for embryo transfer.

"But this is not an easy and straightforward procedure. Embryo transfers have been done in many species but this is the first time that it is being attempted for this species. Chances for producing a northern white rhino calf stand at 50 per cent. We are not sure whether the recipient will carry the pregnancy to term," he said.

But he expressed optimism that the procedure, which is expected to be complete in two years' time, will be successful through research, perfection and global support.

"This will be a template for the saving of other species that are endangered. The two northern white rhinos are healthy and we do routine physical examinations on them every week. They are monitored on a 24-hour basis by armed security from poachers," Dr Ngulu said.

In August last year, the scientists and conservationists harvested two eggs from Najin and eight from Fatu.

The eggs were extracted from the animals' ovaries using a probe with a movable needle guided by ultrasound.

According to the team of veterinarians, the anaesthesia and the ovum pickup went smoothly without complications, after which they were immediately airlifted to Avantea Laboratory in Italy.

The team was led by Prof Thomas Hilderbrandt from Leibniz Institute for Zoo and Wildlife Research (Leibniz-IZW) in Berlin and Dr David Ndereeh from the Kenya Wildlife Service. Other experts were from Avantea, Dvůr Králové Zoo and Ol Pejeta conservancy.

"The progress made so far in the northern white rhino assisted reproduction project is very encouraging and we look forward to the transfer of the already developed embryos into southern white rhino surrogate females here at Ol Pejeta Conservancy," Tourism and Wildlife Cabinet Secretary Najib Balala said then.

"This project should galvanise the world's attention to the plight of endangered species and make us avoid actions that undermine Law enforcement and fuel demand for the rhino horn," he added.

The project was conducted several months behind the original schedule due to the Covid-19 pandemic that brought about travel restrictions and work was halted at European zoos and the Ol Pejeta Conservancy.