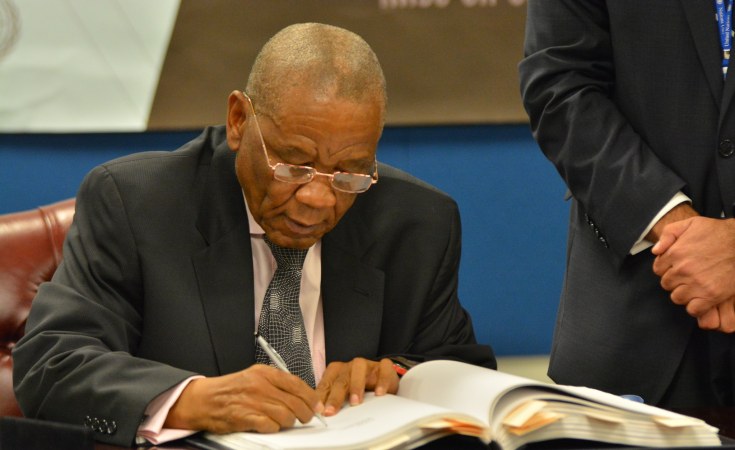 Two members of the Professor Nqosa Mahao-led faction of the ruling All Basotho Convention (ABC) have petitioned the High Court to declare former prime minister and party leader Thomas Thabane unfit to lead the fractious party.

The two - Sekhonyana Mosenene and Thabo Sekonyela - also want the court to interdict Mr Thabane from making decisions on behalf of the ABC due to his alleged ill health until a new leader is elected.

Messers Mosenene and Sekonyela have further petitioned the court to ban Mr Thabane and three other NEC members from attending the national executive committee (NEC) meetings until they are replaced by new people in the NEC.

At their press conference last Tuesday, Prof Mahao and his allies who include chairperson Samuel Rapapa, denied that the NEC had resolved to recall Dr Majoro. They said Dr Majoro was safe in his post and no decision had been reached to oust him.

The press conference confirmed the split between erstwhile allies Prof Mahao and Mr Hlaele. For two years they fought side by side to oust Mr Thabane who had bitterly resisted the February 2019 election of Prof Mahao into the ABC's NEC. But now they are divided with Mr Hlaele, a son-in-law to Mr Thabane, being accused by Prof Mahao and his allies of using the ABC leader to plot his rise to the top party post.

Prof Mahao and his allies further accuse Mr Hlaele and his allies of holding clandestine meetings at Mr Hlaele's house to plot Dr Majoro's ouster as well as "a hostile takeover" of the fractious ABC.

They accuse Mr Hlaele of using Mr Thabane to lead a campaign to have Dr Majoro fired.

In his first NEC meeting last August after being ousted from the premiership, Mr Thabane allegedly read a statement demanding the recall Dr Majoro. The same demand was repeated at the NEC's 14 and 29 December 2020 meetings as well as last Monday.

But Prof Mahao's allies, Messers Mosenene and Sekonyela, now want to stop Mr Thabane from being used in any agenda to oust Dr Majoro. The duo this week filed an urgent application, asking the court to ban the former premier from attending NEC meetings and allow the party to replace him.

In terms of the interim relief, they want "the 3rd (Mr Thabane), 4th (Lehohla), 5th (Maphasa) and 6th respondents ('Maesaiah) be interdicted from participating in the sittings of the national executive committee of the All Basotho Convention (ABC) pending determination of this matter".

In terms of the interim relief, they want "the 3rd, 4th, 5th and 6th respondents (to) be interdicted from participating in the sittings of the national executive committee of the ABC until such time their respective positions are filled in terms of the ABC constitution".

They also want the court to declare that Mr Thabane is unfit to continue as ABC leader.

"That the Master of the High Court should appoint a person to manage the affairs of the leader of ABC, save those of the party as they should be managed in terms of the party's constitution."

In his founding affidavit, Mr Mosenene says they felt compelled to approach the court to preserve law and order and prevent instability within the ABC.

He further states that unless their application is urgently finalised, there is a strong likelihood of the ABC infighting destabilising the country.

"I state the foregoing for the reason that some of the respondents herein support the proposal that was made within the party to recall the sitting prime minister and replace him with another person who for the time being has not been disclosed. Were it to happen, this would lead to a bad state of affairs where governments change and go by the whim in Lesotho. It is the sort of instability that should be prevented," Mr Mosenene states.

He further states that they resolved to approach the court to remove Mr Thabane on the grounds of his alleged ill-health.

Although they do not provide any proof, they cite 'Maesaiah's 2020 court affidavit where she pleaded with the court to grant her bail to enable her to look after her husband who she said was gravely ill with prostate cancer, Alzheimer's disease and incontinence among other illnesses.

She said he would certainly die is she was not released to care for him.

This after she was arrested and detained in custody over the 14 June 2017 murder of her husband's ex-wife, Lipolelo Thabane. She was subsequently granted bail in June 2020 and the murder case is pending before the High Court.

Although, he was said to be on the verge of death, Mr Thabane has showed no signs of slowing down ever since. He has been attending ABC NEC meetings of late and he has even added his voice to calls for Dr Majoro to be recalled.

His apparent good health has however, not stopped Mr Mosenene from seizing on 'Maesaiah's claims of his deteriorating health.

In his affidavit, Mr Mosenene says, "I aver the health of the leader of ABC is deteriorating.

"I aver that during the bail application of the ABC leader's wife, Mrs Maesaiah Thabane, she stated that 'the leader of ABC's health has been deteriorating at an alarming rate. He has been in and out of hospital with a condition that has shown no improvement but rather deteriorates rapidly every day. He has been diagnosed with advanced dementia."

Mr Mosenene further alleges that he "knows for a fact" that Mr Thabane wants to rest and stay away from politics but is being prevented from doing so by those who want to use them to achieve their own ends.

"There are people who eat through him and they are preventing the old man from resting...

"I must inform the court that there is a power struggle within the ABC caused by those who are not popular. I must indicate the present dispute arose on Monday 8 February 2021 during meeting of the NEC of the ABC at Khali Hotel in Maseru.

"The dispute was caused by an attempt to topple the government through unconstitutional means just short of criminal activity. I must indicate that the constitution of Lesotho states the procedures or grounds upon which the sitting government may be replaced by the succeeding one.

"The leader of the ABC had on a prior occasion caused to be discussed the issue of the removal of prime minister by the party. It did not succeed after voting within the party. The very same issue was revisited on 8 February 2021 by a faction of the ABC's NEC.

I aver that during the (NEC) meeting of 8 February 2021, some members of the national executive committee in particular the secretary general (Hlaele) kept on shoving pieces of handwritten papers to the leader of ABC. The intention was to coerce or persuade him to utter certain things which the agenda pushers had up their sleeve, namely removing the prime minister from his position," Mr Mosenene states in his court papers.

So serious is his opposition to the Hlaele faction's moves to oust Dr Majoro that he exchanged blows with fellow NEC member, Mohlophehi Mohobelo, over the issue at the Khali Hotel meeting last week. Mr Mosenene sits in the ABC's NEC as a representative of the Leribe constituencies.

They exchanged blows as tempers flared over whether or not to vote on recalling Dr Majoro from the premiership for firing and reshuffling ministers without the knowledge and consent of the ABC's NEC. 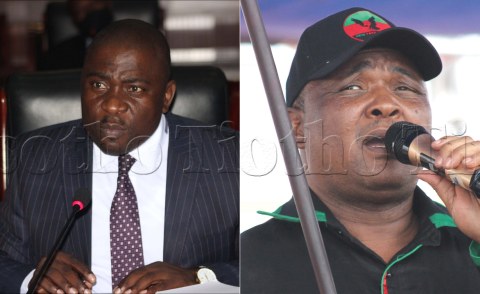 Motion of No Confidence Tabled For Lesotho Prime Minister Majoro
Tagged:
Copyright © 2021 Lesotho Times. All rights reserved. Distributed by AllAfrica Global Media (allAfrica.com). To contact the copyright holder directly for corrections — or for permission to republish or make other authorized use of this material, click here.