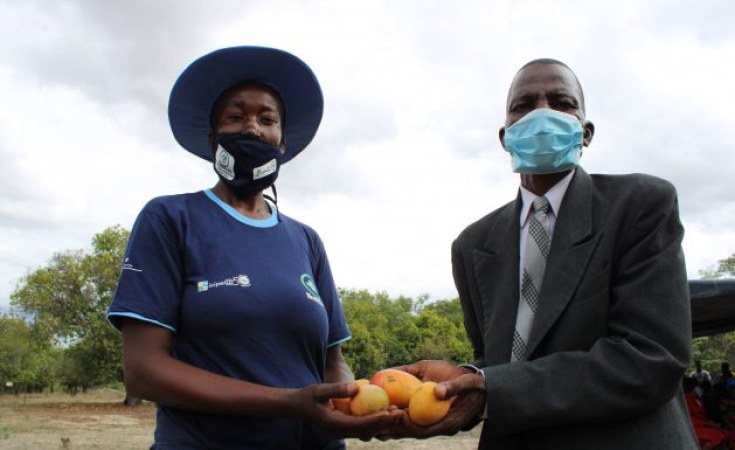 Bulawayo, Zimbabwe — As the climate warms, a destructive pest is spreading its wings and damaging the livelihoods of fruit growers in southern Africa. The invasive fruit fly, Bactrocera dorsalis, is preventing farmers like Susan Zinoro, a mango farmer from Mutoko, Zimbabwe, from literally and figuratively enjoying the fruits of their labour.

Every harvest season, Susan Zinoro, a mango farmer from Mutoko, Zimbabwe, buries half the mangoes she's grown that season. They have already started rotting either on the tree or have fallen to the ground before harvest. It's a difficult task for Zinoro because she knows she is throwing away food and income meant for her family.

But this has been happening for the last seven years, when she first began to notice that more and more fruit would rot and litter the ground.

Zinoro from Zinoro village in Mutoko, 143km north-east of Harare, Zimbabwe's capital, has earned an average $400 per season from selling mangoes over the last five years. This is a shift from many years ago when she would earn more than $1,000 a season.

Another farmer, Pelegrina Msingwini, from Mhondiwa village in Murehwa, which neighbours Mutoko, remembers just two years ago when she harvested and sold 150 (20-litre) buckets of fruit from her plot. Half were rejected at the market because they were damaged. In 2020, she harvested even less mangoes, only 30 buckets.

As the climate warms, a destructive pest is spreading its wings and damaging the livelihoods of fruit growers in southern Africa. The invasive fruit fly, Bactrocera dorsalis, is so small it's often mistaken for a mosquito.

It has become is a serious impediment to mango farmers as it can cause total fruit loss, the ruin livelihoods and export prospects for the tropical fruit, Shepard Ndlela, an entomologist with the International Centre of Insect Physiology and Ecology (ICIPE), based in Nairobi, Kenya, tells IPS.

"In Mutoko [Zimbabwe] only, about 55 percent of households produce and sell mangoes together with other fruits such as bananas, guava and citrus," Ndlela tells IPS, adding that, "They call mango "the golden fruit" thus depicting the true value of the fruit for food, nutrition and source of income."

But approximately half of the 400,000 metric tonnes of mangoes produced each year are lost as a result of the fruit fly, says Ndlela. Uncontrolled, the pest can inflict 100 percent yield loss.

It's an approach to crop production and protection which the United Nations Food and Agriculture Organisation (FAO) describes as combining different strategies and practises to grow healthy crops, minimising the use of pesticides. The environment-friendly methods, which include use of natural enemies of crop pests and bio-pesticides, discourage the development of pest populations by encouraging the natural pest controls.

According to the Food Sustainability Index (FSI), developed by The Economist Intelligence Unit and the Barilla Center for Food and Nutrition, best practice in sustainable food production also involves efforts to eradicate worst practices which include the overuse of chemical fertilisers and pesticides.

In 2020, in Zimbabwe's top mango producing areas, the farmer have started doing just that when a natural enemy to the fruit fly was introduced.

A farmer's friend for a nasty fly

Parasitoids are small insects that are natural enemies of the fruit fly, which lay their eggs in the body of the insect pest, completing their development inside the host and killing it. They are naturally found in Asia where the fruit fly pest is indigenous.

Scientists from ICIPE imported parasitoids for the fruit fly from Hawaii in 2006 for multiplication. Since then parasitoids have been multiplied in Kenya and have been distributed in Malawi, Zambia, Mozambique and Zimbabwe.

Parasitoids have been successfully used in East and West Africa where the fruit fly has been controlled with an up to 33 percent success rate, Ndlela says.

"What we have done is to unite the pest (fruit fly) and its natural enemies (parasitoids)," Ndlela tells IPS.

"Once released into the environment in good numbers, they multiply themselves in the field and move around. This is a biological control programme where we release parasitoids and nature takes its course," Ndlela says.

Ndlela explains that farmers do not have to buy the parasitoids because ICIPE is training its partners in Southern Africa to mass produce the parasitoids for release to farmers.

Wide-scale adoption of other IPM interventions such as baiting techniques, killing of male flies to reduce their population, using bio pesticides and orchard sanitation, are being promoted in Malawi, Mozambique, Zambia and Zimbabwe under a four-year pilot project targeting 4,000 farmers across the region.

The project seeks to improve food security and nutrition, provide income-generation opportunities, and reduce the poverty of small- and medium-scale mango growers, particularly women and youth.

Zinoro and her husband, Batsirai, are part of 1,000 Zimbabwean farmers trained on IPM methods.

More than 1,500 parasitoids were released at Zinoro's mango orchard during the launch of the project. Once established on the farm the parasitoids do not need farmer intervention and will populate and prey on the pest.

"We have learnt that these insects (parasitoids) are friends of the farmer but an enemy of the fruit fly which is the enemy of our mangoes," Zinoro says.

"The programme is helping improve our livelihoods because we are eliminating a pest that has affected mangoes from which we get income," Zinoro, tells IPS from outside her homestead overlooking a field of towering mango trees. Some of the fruit trees have bright yellow plastic buckets dangling under fruit-laden branches -- fly traps.

Research by ICIPE has found that in East Africa, farmers using the IPM package spent 46 percent less on synthetic insecticides per acre, reducing rejection of their fruit by half. As a result, farmers earned 22 percent more income than those not implementing IPM.

"We want to get to a point where the fruit fly is not causing any economic damage," says Ndlela, explaining that the project was inviting agro-dealers to supply traps, lures and bio-pesticides at affordable prices to farmers to promote the wide use of IPM methods.

The use of IPM strategies will enable fruit growers from Zimbabwe to meet the phytosanitary requirements for both domestic and export markets like the European Union, said John Bhasera, Zimbabwe's Permanent Secretary of Agriculture, at the project launch in Mutoko last December.

Bhasera commented that increased mango productivity and quality will support horticulture farmers and open opportunities for value addition of the fruit.

The European Union, a key market for fruit, including mangoes from Africa, requires a phytosanitary certificate from exporting countries to indicate the fruit is free from pests.

Horticulture farmer, Phineas Chinomora, from Chinomona village in Mutoko, grows tomatoes and green mealies and has 56 mango trees on his farm. He is excited about IPM and sees an opportunity to improve his mango production while doing away with commercial pesticides.

"Over the years, I have lost a lot of mangoes to pests and was not sure about the cause. This programme will help me improve my production as I have introduced a lot of grafted mango trees under the programme and reducing pesticides will cut costs," Chinomora tells IPS.

"We have to send our mangoes to Harare, incurring huge transport costs and we get low prices, so improving production and the quality of my mangoes will help us make more money," Chinomora says. "We can now look at adding value to our mangoes by making juice and jam."