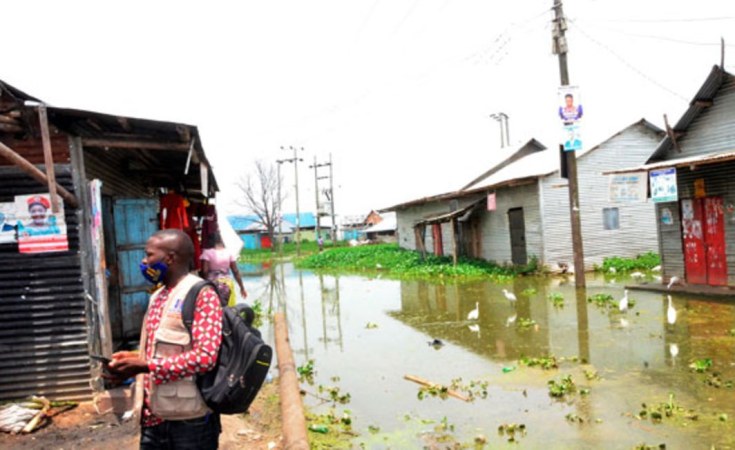 Water levels have risen again at some landing sites on Lake Victoria's shoreline causing panic among fishermen who had started returning to their homes.

The affected landing sites include Lambu, Kachanga, Namirembe, and Kaziru in Masaka District and Kasensero Landing Site in Kyotera District.

Ms Rose Nakyejjwe, the Masaka District environment officer, said the water level at Lambu Landing Site has risen by close to 50 metres and there are fears that they may go up as the March -May seasonal rain starts.

Some of the makeshift houses at the landing site, which had not been affected by the flooding last year, have not been spared this time round.

"Lambu landing site is 50 metres away from the lake shores although by law it is supposed to be 200 metres," Ms Nakyejjwe said during an interview at the weekend.

She said the landing site is currently unfit for human settlement and advised residents to vacate before the seasonal rains intensify.

Mr Alex Muswa, a fisherman at Lambu Landing Site, said the water levels had stabilised last year between November and December, but it started rising again in the last week of January.

He added that government has remained silent about their plight with no meaningful support extended to victims since last year.

"We waited for any relief from government in vain, even the temporary settlement was provided to us by well-wishers," Mr Muswa said.

Ms Kellen Kyakimwa, a food vendor at Lambu Landing Site, said they are not ready to leave because it is where they earn a living.

"Both the floods and Covid-19 pandemic left us crippled as a fishing community," Ms Kyakimwa said.

Mr Rashid Babu, the manager of Mpongo Limited, a firm managing Lambu Landing Site, said they are closely monitoring the water levels and when they reach threatening levels, they will advise residents to relocate to safer areas.

"We are taking into account the advice from weather experts to avoid any loss of lives," Mr Babu said.

Last year, when the water levels rose, the Lambu residents were relocated to what is now known as Covid City, an open space located three kilometres on Bukakkata -Nyendo Road.

At Kasensero Landing Site, the fishermen have asked experts to explain why the water levels have continued to rise since April 2020.

Mr Joseph Ssekiwunga, the chairperson of Kasensero Landing Site in Kyotera District, said a lot of their property has been lost since many houses were submerged in water.

"Some of our colleagues have decided to abandon the landing site because even the fishing business is not currently doing well due to the massive death of fish," he said.

Mr Emmanuel Kakeeto, a fisherman at Kasensero Landing Site, said there is no clear plan to resettle the victims.

"The government only minds about its institutions like police, whose station was relocated to a safer place. It is the Church and some well-wishers who are helping people to get where to sleep. Some politicians only came and distributed some food, but since the campaigns are now over, we doubt whether they will come back," he explained.

Efforts to get a comment from Local Government minister Raphael Magyezi were futile as his known phone number was unavailable while the permanent secretary of the same ministry, Mr Benjamin Kumumanya, did not answer our repeated calls.

However, in an earlier interview with the newspaper, Mr Magyezi said government has a plan to relocate the displaced flood victims, but they are short of funds to implement the programme.

"Districts were tasked to identify some free public land for their relocation, but we also needed some money which we have not yet secured ," Mr Magyezi said.

Over the last 15 years, the fisheries sector has played an important social and economic role in Uganda as the second largest foreign exchange earner, contributing 2.6 per cent of Gross Domestic Product (GDP) and 12 per cent to agricultural GDP.

According to Ministry of Agriculture's records, Uganda has a fish capture potential of 750,000 tonnes annually; the current production is at 461,000 tonnes and 100,000 tonnes from aquaculture.