Tanzania: Is There a Hidden Covid Crisis in Zanzibar? 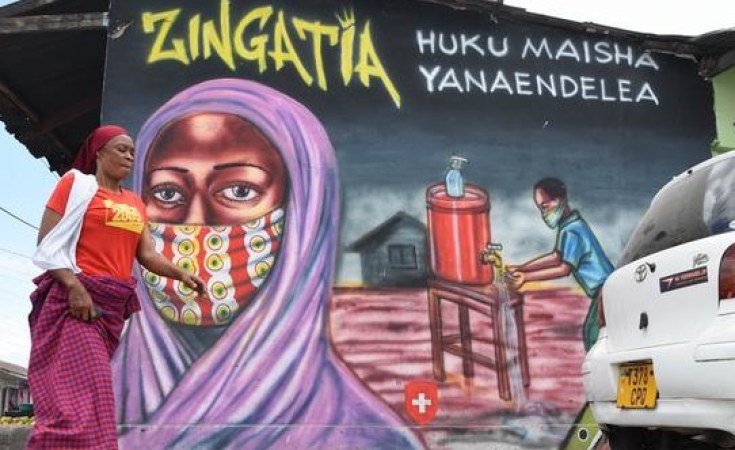 Despite skepticism, fear about the coronavirus has increased in Tanzania following the death of a prominent politician in Zanzibar. Mourners showed up at public memorials wearing face masks and brandishing disinfectant.

The first vice president of the semiautonomous Zanzibar archipelago, Seif Sharif Hamad, was buried on the island of Pemba on Thursday after he died at a hospital on the mainland Wednesday.

Thousands thronged the public prayer services held for Hamad on the Tanzanian mainland in Dar es Salaam, many wearing masks and washing their hands.

The senior politician from the semi-independent Zanzibar archipelago publicly announced that he had developed COVID-19 three weeks ago. His death has increased conversation about the virus on social media, with many users wondering whether there are in fact more active cases in Tanzania and Zanzibar than they had previously thought.

Since the beginning of the coronavirus pandemic, Tanzanian authorities have repeatedly downplayed the issue -- for the most part, citizens asked very few questions in response. Currently, the public has no access to official data concerning the number of COVID-19 cases in the country.

Tanzanians are now increasingly taking precautions against the virus, while also urging each other to stay vigilant. Rights activists and political opponents of President John Magufuli -- a vocal skeptic of health measures -- have also started to weigh in, urging the government to take the pandemic more seriously.

"They say infections are going up but they don't know exactly what's happening," said a DW correspondent in Dar es Salaam, who asked not to be named. "There are more funerals, but, of course, the authorities are saying there is no coronavirus."

The journalist's father, a 57-year-old driver, is being treated at a private hospital in Mbeya Region in southwest Tanzania after being diagnosed with COVID-19. "We don't know where he contracted it," the journalist said.

Maria Sarungi Tsehai, the founder of the #ChangeTanzania movement promoting freedom of expression, is up front about "state machinery that is actively covering up and denying COVID-19." A survey she started circulating on social media this week to ask respondents about their thoughts and experiences during the pandemic has already started to paint a picture of an increasingly concerned population -- particularly during the second wave.

Sarungui Tshehai said the change behavior by Tanzanians and institutions had been incremental and mostly at the community level. The authorities have barely shifted in their response.

"What we are seeing on certain levels is all this indirect messaging around taking precautions." Sarungi Tsehai said. "The government is using euphemisms about masks to prevent so-called respiratory diseases, but they're also still recommending remedies such as steam inhalation."

"This situation remains very concerning. I renew my call for Tanzania to start reporting COVID-19 cases and share data. I also call on Tanzania to implement the public health measures that we know work in breaking the chains of transmission, and to prepare for vaccination," he said.

In Zanzibar, it's almost business as usual for the tourism industry. International visitors are being asked to wear masks. But not everyone follows the recommendations. And people's test results are also causing some confusion.

"At the airport in Zanzibar, me and my family were the only people wearing masks in a super crowded environment," said a DW correspondent who visited Zanzibar last month. "There were four planes going to Russia alone."

He tested negative on departure in Zanzibar but positive when he landed in South Africa.

"My theory is that all tourists are receiving a negative test," he said. The risk of contracting the virus had frequently crossed his mind during his visit to the island, despite the precautions he took.

The pandemic has transformed the archipelago from a vacation destination for the wellness-minded to a coronavirus escape haven for middle-class foreign tourists who are skirting pandemic restrictions elsewhere.

The majority are from Russia or other countries in Eastern Europe, traveling on package tours that would otherwise have taken them to destinations such as Turkey or Egypt, where pandemic restrictions apply.

Although many people are thankful for the droves of travelers, who are helping pump money back into the tourism-dependent economy, others are feeling uneasy about the threat of the virus.

"Every time I get a call from home, my heart is beating fast and I'm thinking my mother has passed away," said Mohammed Khelef, a DW journalist based in Germany. "The posts that someone has died are coming in daily on social media."

The death of the first vice president has hit many Zanzibaris hard. Hamad had once been prominent in the opposition. Khelef said people saw him as a guru and called him "Maalim," or teacher.

Many people are reluctant to speak with foreign media outlets, making it hard to gauge the public reaction when Hamad initially shared the news that he had developed COVID-19.

Around that time, the DW correspondent who tested positive for the virus said few people in Zanzibar were showing concern. "People rather had the feeling that President Magufuli was right," he says.

Khelef said the pandemic was politicized in Tanzania from the outset. Initial efforts to initiate protocols such as contact tracing to curb the spread of the coronavirus were soon reversed.

"The president decided to bulldoze everyone," Khelef said.

Magufuli has declared Tanzania free of the coronavirus and has advised people who are feeling unwell to use herbal remedies.

Khelef said there was a climate of fear in Tanzania, but, without access to other information, many people have little choice but to follow the government.

"If the government has no official protocol, many are pushed into denial," he said.