Liberia: Ivorian Refugees in Liberia Struggle to Get a Helping Hand 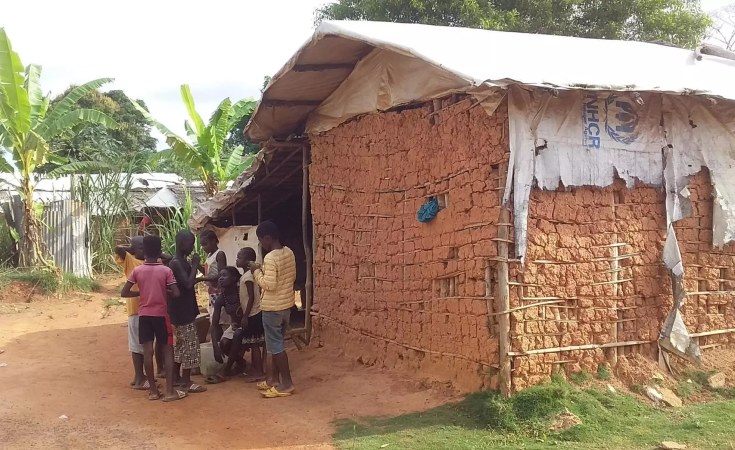 Monrovia — Ivorian Ruth Sayne, 33, escaped the post-election violence in Cote d'Ivoire in 2011 and fled to neighboring Liberia with her husband, a farmer. While life was hard in the refugee camp, formerly the site of the Prime Timber Production (PTP) Company, she survived.

The Sayne family crossed back with their three children into Cote d'Ivoire again in 2017, ready to return to their old life. Peace back in the village was short-lived.

Ruth was just one of 3,200 Ivorians who fled post-election violence after the November 2020 elections, according to the UN Refugee agency, with a total of 26,000 Ivorians taking refuge in Liberia to date.

The PTP refugee camp was established to accommodate Ivorians fleeing into Liberia's eastern Grand Gedeh region as a result of the presidential post-election conflict in Côte d'Ivoire in late 2010 and early 2011 which escalated into violence.

The fighting resulted in the deaths of more than 1,000 people, according to the UN.

The political crisis kicked off after incumbent president Laurent Gbagbo was declared the winner of the polls.

Opposition candidate Alassane Ouattara was considered the winner by international actors, leading to months of violence and eventually negotiations. Ouattara launched a military offensive, taking control of most of the country, as civilians were caught in the crossfire.

In 2020, after the November election, more fled attacks, carried out on a smaller scale.

Ruth came back to the same PTP refugee camp in Liberia in 2020, while others in fled to Ghana and Togo.

Widow flees for her life

Marie Dadialla, 58, is also back at the Liberian refugee camp, this time alone. She escaped the violence once in 2011 with her husband, settling in the dilapidated timber company buildings, but decided to return home in 2016. 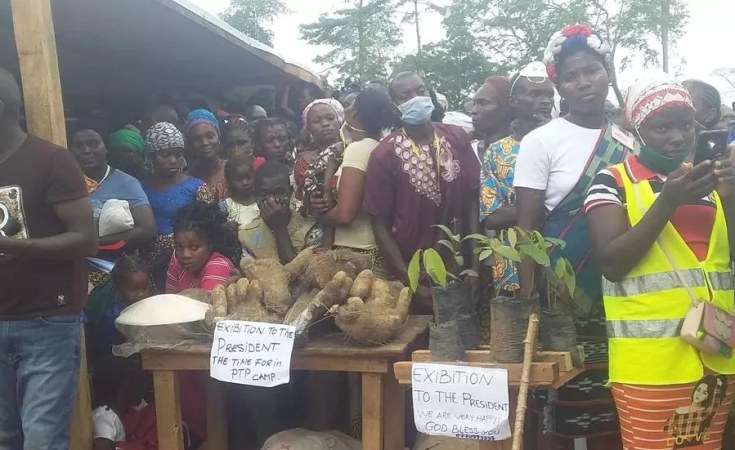 But their relief at returning to their old life was short-lived.

People in their village accused her husband of supporting the current government during the Ivorian constitutional referendum, and they killed him. She fled, back to the camp in Liberia, once again seeking refuge.

Dadialla, who was once a self-sufficient businesswoman in Côte d'Ivoire, has to rely on handouts from other refugees in the camp who receive aid.

Both she and Ruth are finding life difficult in the camp, especially in trying to feed themselves and their families.

"The challenge here is food. We have not received any food ration from UNHCR or any aid organization. Life is difficult for us here," said Ruth.

She relishes the peace in Liberia, but is struggling to survive with day work on the nearby farms.

"A cup of rice around here is sold for L$150. We go in the bush and do daily contract for people and every day they pay us L$200. The money is very small but what to do? The children need to survive," she said, sadly.

"We walked hours on various farms asking Liberians whether they have work on their farms to do. Sometimes if you're not lucky you can't get a job and if you are lucky they just give you L$200 from 8am to 4pm," says Soro.

Men are usually given the jobs to weed cassava bushes, brushing coco fronds, clearing brush or dealing with livestock as day labourers, while the women typically plant and harvest the rice.

UNHCR is trying to deal with the food situation as the new residents are not part of the current food distributions that have taken place since 2011. 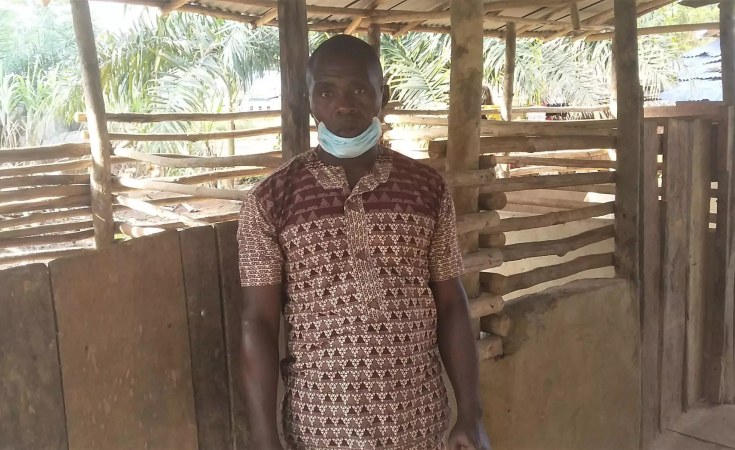 "We agreed that the food being distributed so far has not necessarily reached every hungry mouth but we also have other partners whose mandate is to narrow the gap in terms of food aid specifically WFP," said UNHCR representative Roseline Okoro.

She hopes the WFP is getting ready to conclude the documentation of the new arrivals shortly in order to fix the situation.

"Everything takes a bit of time but I believe that the assistance we provided so far has met the needs amongst the refugees and the recent arrivals," she said.

Part of the UNHCR and WFP programs have been to promote integration of Ivorians in Grand Gedeh. UNHCR had given some of the Ivorian refugees cattle or pigs to raise. Locals in the area also received livestock.

"They gave me a set of pigs to raise and today I have more than 20 other pigs. I sell them and used the money to feed my family," said farmer Christian Toulouis, 36, speaking while walking around his pig farm. He was part of the original group of refugees who fled in 2011.

Another aspect of local integration is to provide more permanent housing for the refugees, who have been living in the dilapidated timber headquarters. They told RFI that the rundown buildings leaked during the rainy season, making living there a miserable existence.

An initial 315 hectares of land were donated by local Liberians to construct housing units according to Festus Logan, the Liberia Refugee, Repatriation and Resettlement Commission (LRRRC) head. 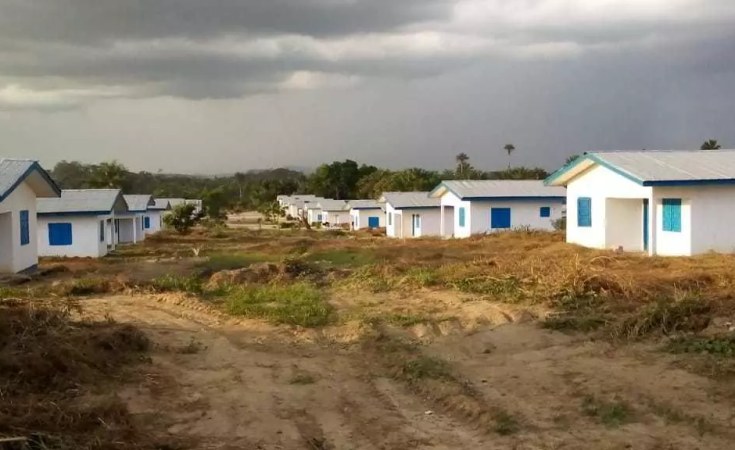 The UN agency and its partners have constructed an initial 93 modern housing units, in Bahn, Nimba County, northeastern Liberia.

Liberian President George Weah was briefly on hand at the weekend to break ground for the UNCHR to begin construction of 70 homes to be used by Ivorian refugees opting to settle in Liberia.

Although he was scheduled to attend the red carpet event, which included speeches, a tour and meeting with the refugees, he spent a total of two minutes at the ground, holding a shovel, and breaking the ground.

Many were disappointed after waiting for Weah for nearly eight hours, including Marie Susane Baye, who was hoping to present her various cassava mixtures to the president.

"We came here by 7am and waited for the president until after 3pm. He came and broke the ground but he didn't sit for even five minutes to hear from us," she said, adding that the leaders of the community were all seated, waiting for him to speak.

In his State of the Nation address last month, Weah called on Liberians to farm to improve the economy, a point veteran cocoa farmer Jilbert Gbla Monseo, 55, took to heart. He had prepared several cocoa plants for the president.

"The president said Liberians should get back to the soil, so I wanted him to see these beautiful cocoa plants I brought from my farm, but no way. I feel very bad," he said.

Even the UNHCR had anticipated that he would carry out a number of ceremonies, says representative Okoro. 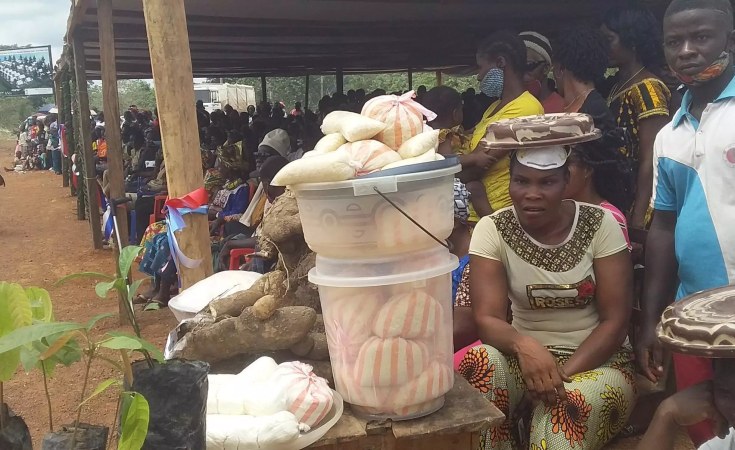 "We had hoped that the president would also cut the ribbon on the recently completed town hall which is funded by UNHCR but his program was very tight, very loaded so for the one that he came to inaugurate, we are very thankful," she said.

Okoro indicated that each housing unit, which includes a living room, two bedrooms and a bathroom, cost around US$8,100.

The modern housing units valued at over US$650,000 were implemented by the government of Liberia through the Liberia Refugee, Repatriation and Resettlement Commission, and UNHCR, as well as UN Population Fund, among others.

After suffering from so much insecurity in their own country, many Ivorians are looking forward to integrate into life in Grand Gedeh county, especially as Liberians have been so kind to the refugees, according to a number of Ivorians RFI spoke to.

"We feel very comfortable living here because since we came here, Liberians living here take us as their family. We do things together and we are happy to stay here and don't have the intention of going back to Cote d'Ivoire," says single mother Viviane Tommey, 47.

Pig farmer Toulouis has officially opted to be reintegrated into Liberia, and hopes the Liberian government will give him citizenship.

The Liberia government has promised its unwavering support toward creating a hospitable environment for the refugees living in Liberia.

Meanwhile, Liberia refugee agency head Festus Logan has appealed to Monrovia to grant a fee waiver in the acquisition of documentation which include resident permits, naturalization certificates and others to give Ivorians legal status.

Although Weah holds the power to grant citizenship, he told Logan that he would have to have the Liberian legislature look at the issue.

Killings, Arrests After Cote d'Ivoire Presidential Poll - HRW
Tagged:
Copyright © 2021 Radio France Internationale. All rights reserved. Distributed by AllAfrica Global Media (allAfrica.com). To contact the copyright holder directly for corrections — or for permission to republish or make other authorized use of this material, click here.