Uganda Defiant As US Threatens Sanctions Over Contested Elections 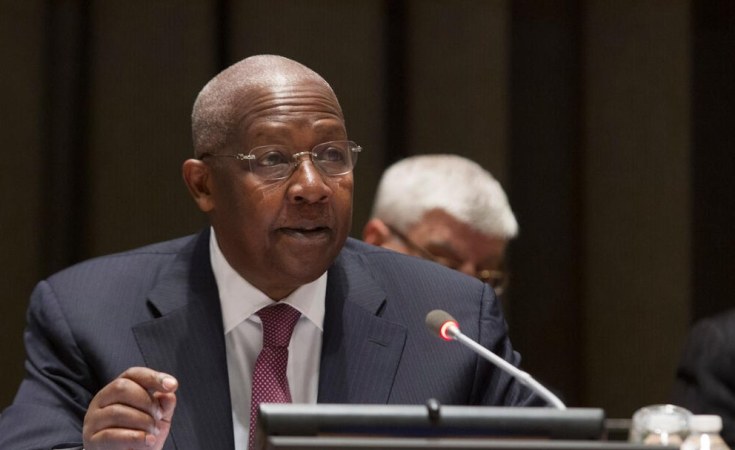 Possible US sanctions against Uganda following alleged irregularities in January's elections and abuse by the security forces would be unfortunate, but are not worrying Ugandan authorities, the foreign minister has told RFI.

"It would be regrettable if they do sanctions, but first and foremost I think our elections were both free and fair, and peaceful," said Sam Kutesa.

Washington said on Tuesday that Uganda's polls were marred by election irregularities and abuses by the government's security services against opposition candidates and members of civil society.

US State Department spokesperson Ned Price told journalists that they wanted to see "independent, credible, impartial and thorough investigations" into election rigging and a crackdown by security forces.

"We'll consider a range of targeted options to hold accountable those members of the security forces responsible for these actions," said Price.

The US government was measured in describing how far it would go in possible measures or sanctions it could level at President Yoweri Museveni.

Price highlighted the important role Uganda plays in the region, and how that role aligns with American interests, for example, with Uganda's contribution to the Amisom force in Somalia.

Ugandan Foreign Minister Kutesa said his government "totally rejects that position", and any alleged electoral fraud could be pursued through legal avenues, underlining the independence of Uganda's judiciary.

"We don't think that it is a matter of concern, we think there is more need for engagement and explanation and the position will be understood better between our countries," said Kutesa, saying Museveni's government was ready to engage with the new US administration.

Ugandan government spokesperson Ofwono Opondo said Kampala had not yet received any indications from the US government in writing, and it would "respond appropriately and effectively" if and when Washington relayed those comments.

"In the meantime, the US government better fix its own elections where, according to [former] President Donald Trump, even the dead voted and Joe Biden is in office through fraud, and so they should be the last to give lectures," Opondo added.

Uganda's President Yoweri Museveni was re-elected earlier this year for his sixth term in office, taking almost 59% of the vote, according to the country's electoral commission.

Opposition contender Bobi Wine criticised the elections as a "complete sham" and had planned to bring a legal challenge before the courts. This week he said he was pulling the case because the judges were biased.

Wine, a singer-turned-politician with a significant following amongst Uganda's youth, was arrested during the election campaign and human rights organisations complained about harassment and arrests of the opposition, attacks on the media and scores of deaths.

"It is long past due for the United States to revamp and overhaul its policy towards Uganda," said Jeffrey Smith, founding director of Vanguard Africa, a US-based non-profit, which works on governance.

"General Museveni is a military dictator who has used every tool at his disposal, for nearly four decades now, to deny democracy to Ugandans," added Smith, who has worked with Bobi Wine for several years.

The US government should review its financial assistance to Uganda, according to Smith, and reconsider any programmes related to the security sector, as well as slap Museveni and others with targeting measures, including freezing assets.

Uganda receives over US$2bn in overseas development aid, according to a 2019 assessment by the Organisation for Economic Co-operation and Development.

The Great Lakes country receives some US$753m in aid from the US, data from the US Agency for International Development (USAID) reveals, with the US Department of Defence responsible for disbursing US$138m to Museveni's government.

Political analyst Angelo Izama is doubtful that the Ugandan government would carry out any investigation into alleged election rigging or abuses by security forces that would satisfy the US.

"This suggestion is tantamount to a pardon for the excesses of the election and reflects the view in Washington that while they may not like Museveni, like other administrations before they have to continue to work with him," said Izama, a co-founder of the Fanaka Kwa Wote think-tank.

Museveni met on Sunday with top Chinese diplomat Yang Jiechi, who said the 76-year-old leader's re-election "speaks volumes of the trust and support" of the Ugandan people. Museveni said he was "very happy with Chinese solidarity".

Analyst Izama said possible US sanctions would likely be weighed against the chance "any further pressure would drive Kampala further into the influence of China".

Museveni also met with several European ambassadors recently, warning the EU that it should not get involved in "matters that you don't understand", because it could lead to "serious consequences" and suffering of the people.

"On the EU side, there are no sanctions against individuals in Uganda at this stage," an EU spokesperson said in emailed comments.

Any US measures are likely to use Magnitsky sanctions, targeting Ugandan security personnel with asset freezes and travel bans, according to analyst Izama, but not touching areas more likely to directly affect ordinary Ugandans.

"US aid already flows directly into social services in areas like health- it is doubtful that any inventory here will be touched," he said.