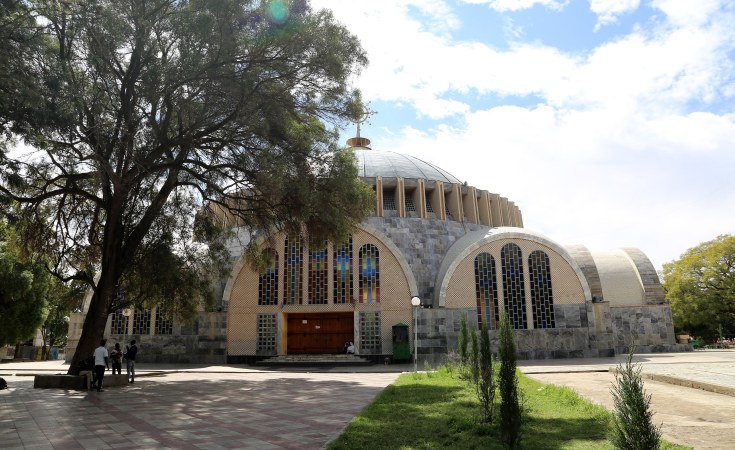 Eritrean troops fighting in Ethiopia's Tigray state systematically killed hundreds of unarmed civilians in the northern city of Axum on 28-29 November last year, opening fire in the streets and conducting house-to-house raids in a massacre that may amount to a crime against humanity, Amnesty International said today (26 February) in a new report.

Amnesty spoke to 41 survivors and witnesses - including face-to-face interviews with recently-arrived refugees in eastern Sudan and phone interviews with people in Axum - as well as 20 others with knowledge of the events. They consistently described extrajudicial executions, indiscriminate shelling and widespread looting after Ethiopian and Eritrean troops led an offensive to take control of the city amid the conflict with the Tigray People's Liberation Front in mid-November.

Satellite image analysis by Amnesty's Crisis Evidence Lab has corroborated reports of indiscriminate shelling and mass looting, as well as identifying signs of new mass burials near two of the city's churches.

"The evidence is compelling and points to a chilling conclusion. Ethiopian and Eritrean troops carried out multiple war crimes in their offensive to take control of Axum.

"Eritrean troops went on a rampage and systematically killed hundreds of civilians in cold blood, which appears to constitute crimes against humanity.

"This atrocity ranks among the worst documented so far in this conflict. Besides the soaring death toll, Axum's residents were plunged into days of collective trauma amid violence, mourning and mass burials.

"As a matter of urgency, there must be a UN-led investigation into the grave violations in Axum. Those suspected of responsibility for war crimes or crimes against humanity must be prosecuted in fair trials, and victims and their families must receive full reparation.

"We repeat our call on the Ethiopian government to grant full and unimpeded access across Tigray for humanitarian, human rights and media organisations."

The mass killings came just before the annual celebration of Aksum Tsion Mariam, a major Ethiopian Orthodox Christian festival on 30 November, compounding the trauma by casting a pall over an annual event that draws many pilgrims and tourists to the sacred city.

On 19 November, Ethiopian and Eritrean military forces took control of Axum in a large-scale offensive - killing and displacing civilians with indiscriminate shelling and shooting. In the nine days that followed, the Eritrean military engaged in widespread looting of civilian property and extrajudicial executions.

Witnesses could easily identify the Eritrean forces. They drove vehicles with Eritrean registration plates, wore distinctive camouflage and footwear used by the Eritrean army, and spoke Arabic or a dialect of Tigrinya not spoken in Ethiopia. Some bore the ritual facial scars of the Ben Amir, an ethnic group absent from Ethiopia. Some of the soldiers also made no secret of their identity - openly telling residents they were Eritrean.

'All we could see were dead bodies'

According to witnesses, the Eritrean troops unleashed the worst of the violence on 28-29 November. The onslaught came directly after a small band of pro-Tigray People's Liberation Front militiamen attacked the soldiers' base on Mai Koho mountain on the morning of 28 November. The militiamen were armed with rifles and supported by residents brandishing improvised weapons - including sticks, knives and stones. In a video recorded early that day from several locations at the bottom of the mountain, sustained gunfire can be heard ringing out across the city. A 22-year-old man who wanted to bring food to the militia told Amnesty:

Survivors and witnesses said Eritrean forces deliberately and wantonly shot at civilians from about 4pm onwards on 28 November. According to residents, the victims carried no weapons and many were running away from the soldiers when they were shot.

One man who hid in an unfinished building said he saw a group of six Eritrean soldiers kill a neighbour with a vehicle-mounted heavy machine-gun on the street near the Mana Hotel:

"He was standing. I think he was confused. They were probably around ten metres from him. They shot him in the head."

"I saw a lot of people dead on the street. Even my uncle's family. Six of his family members were killed. So many people were killed."

The killings left Axum's streets and cobblestone plazas strewn with bodies. One man who had run out of the city returned at night after the shooting stopped. "All we could see on the streets were dead bodies and people crying," he said.

On 29 November, Eritrean soldiers shot at anyone who tried to move the bodies of those killed. The soldiers also continued to carry out house-to-house raids, hunting down and killing adult men, as well as some teenage boys and a smaller number of women. One man said he watched through his window and saw six men killed in the street outside his house on 29 November. He said the soldiers lined them up and shot from behind, using a light-machine gun to kill several at a time with a single bullet.

Interviewees named scores of people they knew who were killed, and Amnesty has collected the names of more than 240 of the victims. The organisation has been unable to independently verify the overall death toll, but consistent witness testimonies and corroborating evidence make it plausible that hundreds of residents were killed.

Most of the burials took place on 30 November, but the process of collecting and burying the bodies lasted several days. Many residents said they volunteered to move the bodies on carts, in batches of five to ten at a time - one said he transported 45 bodies. Residents estimate that several hundred people were buried in the aftermath of the massacre, and they attended funerals at several churches where scores were buried. Hundreds were buried at the largest funeral, held at the complex that includes the Arba'etu Ensessa church and the Axum Tsion St Mariam Church.

In the days following the burials, the Eritrean army rounded up hundreds of residents in different parts of the city. They beat some of the men, threatening them with a new round of revenge killings if they resisted. Axum residents witnessed a surge in the Eritrean army's looting during this period - targeting shops, public buildings including a hospital, and private homes. Luxury goods and vehicles were widely looted, as well as medication, furniture, household items, food and drink.

International humanitarian law prohibits the deliberate targeting of civilians, indiscriminate attacks and looting. Violations of these rules constitute war crimes. Unlawful killings that form part of a widespread or systematic attack against a civilian population are crimes against humanity.

'Crisis in Tigray Region is Completely Out of Control'