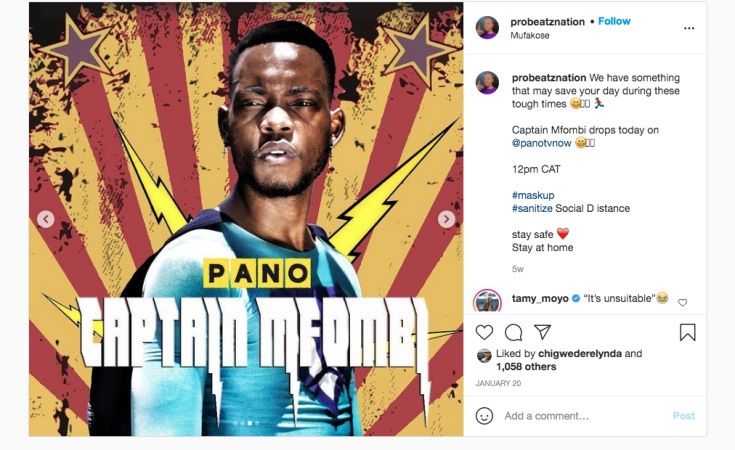 Launched late January, the series which is broadcast on YouTube via the Pano TV channel is getting close to 40 000 views per episode.

It brings a local flair to the superhero scene.

Mfombi is a moniker of Harare's high-density suburb Mufakose which is famed for its high crime rate, thievery to be specific.

From the very beginning Captain Mfombi brings in the ghetto sentimentality, the need for a fast life with quick returns, the hustle to make a living and the usual electricity load shedding.

Similar to the Marvel superhero Flash, Captain Mfombi gets his superpowers after being electrocuted on his was not during some huge science experiment but while trying to change a lighting bulb.

He first discovers that he has powers to instantly charge phones, switch on televisions and other electric gadget with an instant touch even in the absence of electricity.

Together with his wife (played by rapper Natasha Muzz), they device a way out of abject poverty, an instant cellphone charging business but this fails to work as one phone explodes during the process.

Captain Mfombi then discovers another super power, lightning speed, and again the duo harnesses the power to make ends meet. Captain Mfombi has a good cocktail of humour and the reality of life in high density suburbs. With every episode, new talents, challenges and opportunities arise.

Though not as magnificent as Marvel superheroes, the producers are doing amazing work in graphics to produce quality good enough for an international audience.

"As a studio we have always worked on stretching our imagination and we are open to limitless possibilities and Captain Mfombi is a result of that," said one of the producers Blessing Chinanga.

"We asked ourselves, what does a hero look like if they were Zimbabwean?

What would they do?

What language would they speak? What type of issues would they address? We realised that being a hero in America is different to being a hero in Zimbabwe so with Captain Mfombi we wanted to be very organic and authentic to the issues we face here."

Chinanga said their creation is inspired by African stories.

"Captain Mfombi was inspired by us Zimbabweans and Africans and our hope is to stay true to the core issues we face as a nation and as continent," he said.

"We also tried to incorporate humour as an element we know our audience on Pano TV resonate with and we are happy to produce a superhero that all Zimbabweans and Africans can be proud of."

Pano TV is a platform that broadcasts original African content.

"As it grows we hope Pano TV will have cocktail of content offering from many nations across Africa," said Chinanga.

The local film industry has been harnessing social media and the internet to push their various work in the absence of functional broadcasters.

A number of web series are being broadcast, some after a good internet run are then adopted by ZBC to be shared to a wider audience.