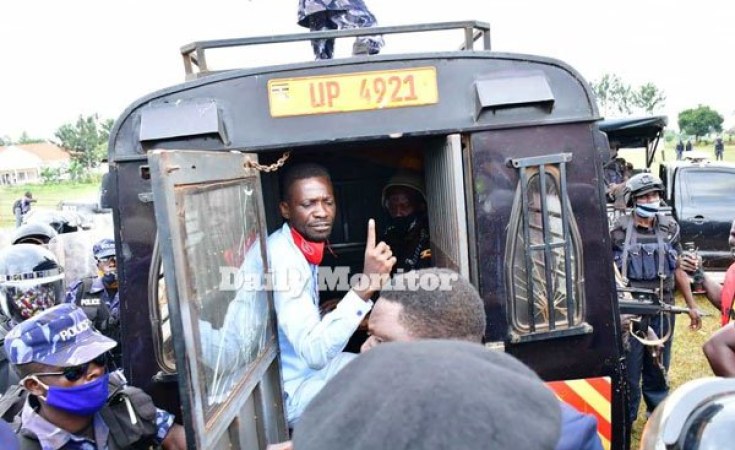 Ugandan politician Robert Kyagulanyi, popularly known as Bobi Wine, says he will not hand over his new armored vehicle to the government for fresh inspection as demanded by the authorities.

The youthful Bobi Wine, who finished second to President Yoweri Museveni in the country's general elections held on January 14, is battling accusations by the Uganda Revenue Authority of erroneously declaring the value of the said car.

The 39-year old recently unveiled a state-of-the-art Toyota Landcruiser, which he claimed had been donated to him by his friends and supporters from both in Uganda abroad.

But the Uganda Revenue Authority (URA) has since released a statement indicating the details of the car were misrepresented and it was thus undervalued.

"An inquiry has been conducted into the circumstances under which motor vehicle Toyota Land Cruiser Registration Number UBJ 667F was declared to customs vide reference UGCWH C54 dated 12th January 2021 was cleared and subsequently registered," the Revenue Authority said in a statement.

"The above-mentioned motor vehicle was declared to customs as an ordinary motor vehicle instead of an armoured motor vehicle, the implication of which is that the vehicle was under-valued. That would mean the tax of UGX88 million (Sh2.7 million) was charged less than what would have been paid, hence the decision to recall the car."

But Bobi Wine has scoffed a the claims that the vehicle should be valued afresh or repossessed.

"Much as it is true you have the powers under section 236(d) of the EAC Customs Management Act to examine goods, you don't have automatic powers to reexamine goods which were in your custody (ware house), were examined, assessed for tax, the tax fully paid and the goods released to the owner/taxpayer," he said in a response to URA through his lawyers.

URA claims the vehicle entered Uganda from Kenya through the Busia border on November 5, 2020, registered under license players KCY 550X belonging to one Fauz Khalid, a Kenyan. It was issued a certificate for temporary import.

An ordinary make of the car is worth Sh8 million but an armored version could cost up to Sh45 million.