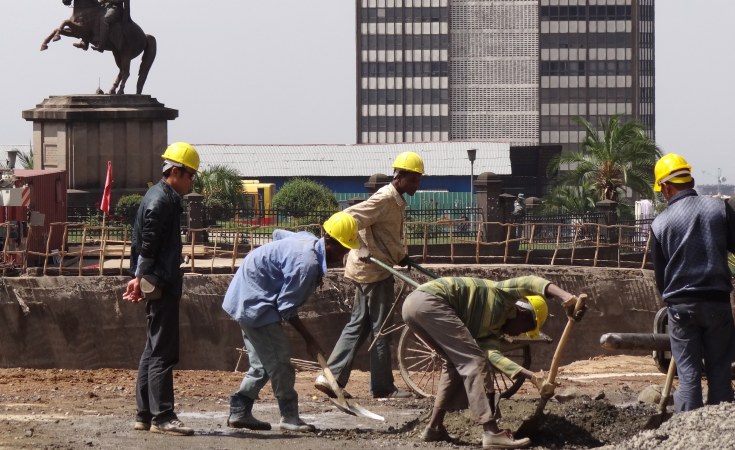 The construction industry in Ethiopia has been experiencing a major boom in the past two decades, expanding by 16% in 2018 alone, and accounting for 15% of the country's economy.

The growth of the sector owes much of its success to the government's ambitious infrastructure development plans. Major investments by the government in social housing, roads, higher learning institutions and dams have been driving the industry with the sector projected to outgrow that of neighboring countries by 2025.

The construction industry is also the largest employer in Ethiopia providing full-time and part-time job opportunities for millions of people. It is also arguably the only sector in the Ethiopian economy that has been able to offer massive job opportunities, not only to skilled laborers, but also to thousands of unskilled young men and women who have been migrating over the past decade from the rural to urban areas in search of better livelihoods.

The construction sector plays the most prominent role in ensuring the reach of public services to the most remote parts of the country. A good example of this is, perhaps, the Grand Ethiopian Renaissance Dam that is not only expected to provide electric power to much of the nation's needy but also stands as a unifying icon and pride of the nation. We can therefore say, the success or failure of this industry will have direct repercussions on the wellbeing of scores of stakeholders and the economy at large.

Although promising, the industry is now struggling to cope up with multiple internal and external challenges. Some of its internal challenges include recurrence of cost overrun, delay in delivery, poor productivity, weak project management capability, poor work ethics and discipline, poor health and safety practices, and poor capacity building trends.

Some of the external challenges that the industry has been facing lately include inflation, delay in the provision of LC permits from banks, delayed payment by public employers, and unwarranted and recurrent scope revisions in the ensue during the course of the project implementation phase.

Another external element that significantly affects the sector's competitiveness is the devaluation of the Ethiopian currency that took place on October 11, 2017. While a currency devaluation is known to affect the performance of the construction industry in all parts of the world, the effects are even more heightened in countries like Ethiopia that are known to be highly dependent on the import of various materials from abroad. This phenomenon naturally leads to the prevalence of cost overruns in production and delays in delivery.

According to the findings of a comprehensive research that was initiated and sponsored by the Ethiopian Constructors' Association, the immediate impact of the enacted currency devaluation scheme on the prices of construction inputs (material, equipment and machinery) showed an average increment of 33% and a rise of 20.45% on the overall costs of building construction projects.

As a contractual remedy that is usually put in place in standard construction contracts to curb the downsides of currency devaluation and other Force Majeure events on prospects of undergoing construction projects, contractual clauses that entitle contractors to compensation for unexpected costs that they may bear during the transpiration of such events. However, in the event of the entailing currency devaluation scheme, there seems to be no interest on the sides of employers to entertain such expeditions even though the applicable contracts indisputably situate them to do so.

The reluctance of public entities and project owners to provide appropriate compensations to contractors for the losses that they sustained due to currency devaluation, exacerbated by the persistent downsides of the internal and external factors of the industry, has ultimately affected the capacities and performances of the major operators of the Ethiopian construction industry.

Again, because of the major role the industry plays in the Ethiopian economy, its failures - as well as its gains -should not be left to the discretion of some less informed regulators and actors. For obvious reasons, contractors cannot operate on losses and hence they will ultimately be compelled to downsize their workforce, will be unable to pay salaries, cannot discharge their contractual obligations, or/and unable to pay taxes or bank loans.

The failure of the construction industry is therefore likely to have a major impact on the national economy. It is therefore important that policymakers and government bodies of the country take decisive remedial actions to address the consequences of the currency devaluation event in the sector.

Moreover, it is worth noting that the Ethiopian currency has also been significantly 'devaluated' over the past year with 1 dollar being exchanged for over 40 birr lately, a major devaluation from the 32 birr exchange rate that prevailed in 2019. Considering that the economy is also expected to take a hit from the COVID-19 pandemic, it is appropriate to state that the construction industry had never been in need of a lending hand than these days.

As the federal and regional governments are the major employers of the sector, they should decisively expedite the provision of proper compensations to contractors for the market inflation that had ensued due to the currency devaluation, thereby setting a good precedent for the private sector to follow suit.

Contractors and other stakeholders of the construction industry on the other hand should also tirelessly keep on engaging the concerned entities in the policy circle through their pertinent Associations to portray the gravity of the situation until the desired outcome looms on the horizon.

As has been already stated, the sector does not only provide employment opportunities to millions of workforce, but also fares a great stake on the wellbeing of the country's economy as a whole; prompting all concerned parties across the board to render it the appropriate attention that it graciously deserves.

Ed.'s Note: The author is owner and Managing Director of Zamra Construction PLC. The views expressed in the article do not necessarily reflect the views of The Reporter.