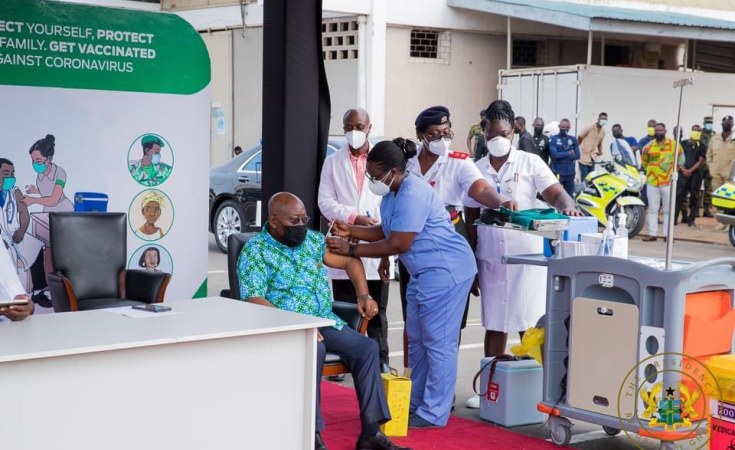 Ghana's President Nana Akufo-Addo became the world's first recipient of a coronavirus vaccine from Covax, a scheme to help poorer countries acquire jabs. Some 600,000 doses are set to be distributed across the country.

It is a global scheme to procure and distribute inoculations for poorer countries.

Some richer countries have surged ahead with inoculating their population, but many poorer countries are still awaiting their first vaccine doses.

"It is important that I set the example that this vaccine is safe by being the first to have it, so that everybody in Ghana can feel comfortable about taking this vaccine," the 76-year old president said.

The first lady Rebecca Akufo-Addo also received a shot, one day before the rest of the 600,000 doses are deployed across the country.

Ghana's food and drug authority in February authorized the Indian-manufactured shots of the AstraZeneca/Oxford vaccine and Russia's Sputnik V.

Ghana's government aims to target 20 of its 30 million population by the year's end.

Despite this, many Ghanaians are concerned about being vaccinated following the circulation on social media of conspiracy theories claiming the jab is meant to "wipe up Africans."

Walid Saed told DW that he will not take the vaccine because "this coronavirus, they are using it for political talk," adding that he "didn't believe in" the existence of the virus.

There are other Ghanaians who believe the vaccine will alter their immune system.

A female resident told DW that she won't take the jab because she "heard the vaccine is not good for the immune system. It may deform you if they give it to you."

"It is a way to control [us] Africans," another local said, expressing her sentiments against the vaccine.

President Nana Akufo-Addo, in a televised broadcast over the weekend, urged the public to let go of such notions about the vaccine.

"As your president, I want to assure you that the vaccine is safe," he said.

Despite the vaccine roll-out, the president said lockdown restrictions to curb the spread of the virus were to remain in place.

Last Wednesday, Ghana was the first country to receive AstraZeneca vaccines from Covax, led by Gavi the Vaccine Alliance, the World Health Organization (WHO) and the Coalition for Epidemic Preparedness Innovations (CEPI).

Some 145 participating economies are set to receive 337.2 million doses by mid-year.

But officials say that's only enough to vaccinate a little over 3% of their combined populations.

Covax says it hopes to hit 27% in lower-income countries by the end of December.

Ghana has recorded 84,023 COVID-19 cases and 607 deaths since the start of the pandemic, but some say the true figure is believed to be higher because of lack of testing.

That said, many experts believe that the West African nation can contain the pandemic if the majority of Ghanaians take the vaccine.

"This is an emergency, we have a limited time," said immunologist Dr Yaw Bediako, stressing the importance of vaccinating as many people as possible.

Schools in Ghana reopened in January after a 10-month closure, but large social gatherings are banned and land and sea borders have remained closed since March 2020.

AFP and Reuters contributed to this article.

Why Some Africans Are Wary of the Covid-19 Vaccine