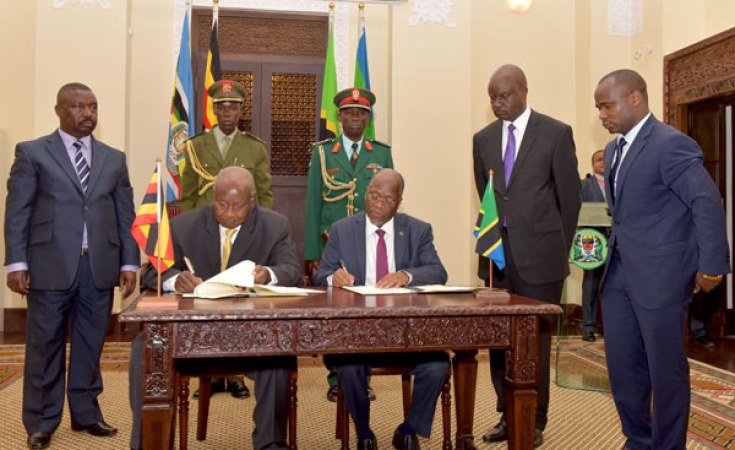 PPU/Daily Monitor
President Yoweri Museveni, seated left, and his Tanzanian counterpart John Pombe Magufuli sign the East African Crude Oil Pipeline Agreement in Dar es Salaam on May 22, 2017. The agreement was an expression of intent to go ahead with the construction of the 1,4445km oil pipeline from Hoima District in western Uganda to the Tanzanian Port of Tanga.
Thomson Reuters Foundation (London)
By Nita Bhalla

Nairobi — Nearly a third of the pipeline will run through the basin of Lake Victoria, which more than 40 million people rely on for water

More than 260 charities on Monday urged banks not to finance a $3.5 billion oil pipeline in East Africa, concerned the project could lead to the loss of community land and livelihoods, environmental destruction and surging carbon emissions.

France's Total and China National Offshore Oil Corporation are due to start work soon on a 1,445-km (900-mile) pipeline from western Uganda through neighbouring Tanzania to the Indian Ocean port of Tanga.

About two thirds of the pipeline's cost will be financed by debt, and a Ugandan unit of South Africa's Standard Bank Group, Japan's Sumitomo Mitsui Banking Corp and the Industrial and Commercial Bank of China are together considering raising the funding, the charities said.

An open letter signed by 263 charities - including the Africa Institute for Energy Governance, the Alliance for Food Sovereignty in Africa, Greenpeace and Friends of the Earth - urged the banks not to grant loans for the scheme.

"In light of the climate change crisis, many countries have made commitments to clean up their energy systems by promoting renewable energy," said Diana Nabiruma from the Africa Institute for Energy Governance, one of the signatories, in a statement.

"No responsible bank should finance the East African Crude Oil Pipeline (EACOP) project well knowing that the economic, environmental, climate change and social risks of the project are too immense."

The letter also called on 23 other banks to rule out financing for the project.

Uganda is eager to accelerate the plan to begin pumping crude, which President Yoweri Museveni hopes will help revive an economy hit hard by the coronavirus pandemic.

Landlocked Uganda discovered crude oil reserves about 14 years ago but commercial production has been delayed partly because of a lack of infrastructure, such as an export pipeline.

International and local environmental groups have voiced fears over the risks posed by the pipeline, but last December Uganda's National Environment Management Authority (NEMA) issued a certificate of approval for an environmental and social impact assessment report submitted by Total.

As Tanzania had already given its approval, the Ugandan stamp meant the project had environmental impact certification for its entire length.

But the charities said on Monday an estimated 14,000 families were likely to lose their land if the pipeline went ahead as it could pass through more than 400 villages in Uganda and Tanzania.

Nearly a third of the pipeline will run through the basin of Africa's largest lake, Lake Victoria, which more than 40 million people from countries including Kenya, Uganda, Tanzania and Burundi depend on for water and food production.

It will also cut across 200 rivers, thousands of farms and vital wildlife reserves, and will also fuel climate change by transporting oil that will generate over 34 million tons of carbon emissions each year, said the letter.

Standard Bank said in an emailed statement to the Thomson Reuters Foundation that it had hired an independent environmental and social advisor to visit the project and produce a due diligence report.

The bank was already reviewing a preliminary report.

"We support responsible investment through assessing and managing our environmental, social and governance (ESG) risks," the bank said.

Representatives from Sumitomo Mitsui Banking Corp could not be immediately contacted by the Thomson Reuters Foundation and the Industrial and Commercial Bank of China did not reply to requests for comment.

China National Offshore Oil Corporation and Total did not immediately answer a request for comment, but the French company has said the pipeline was designed "with the overarching concern of minimising and mitigating the impacts on local communities".

It has said adequate compensation, housing and livelihood programmes would be provided to affected households.

Construction of Uganda-Tanzania Crude Oil Pipeline to Start in March