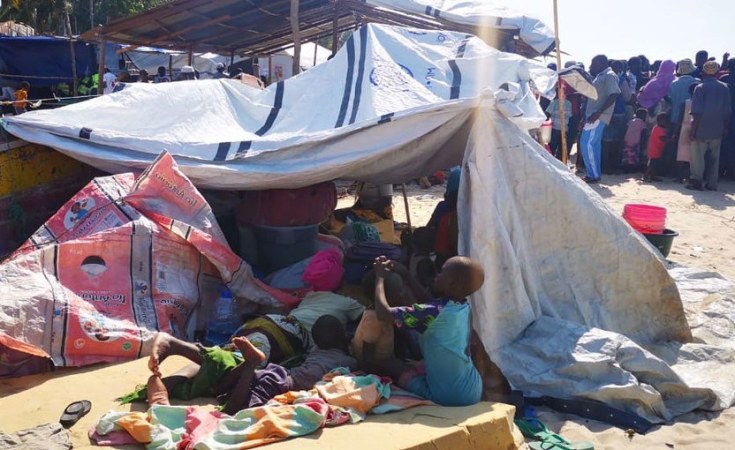 Hundreds of civilians in Mozambique have been unlawfully killed by the armed group known locally as 'Al-Shabaab', government security forces and a private military company hired by the government, Amnesty International said today, as it published a new report on the ongoing conflict in Cabo Delgado.

The report, 'What I Saw Is Death': War Crimes in Mozambique's Forgotten Cape, documents serious violations of international humanitarian law by all parties resulting in widespread death, destruction and a humanitarian crisis that has caused more than half-a-million people to flee.

"The people of Cabo Delgado are caught between the Mozambican security forces, the private militia fighting alongside the government and the armed opposition group locally known as 'Al-Shabaab' - none of which respect their right to life, or the rules of war," said Deprose Muchena, Amnesty International's Regional Director for East and Southern Africa.

"All three have committed war crimes, causing the deaths of hundreds of civilians. The international community has failed to address this crisis as it has escalated into full-blown armed conflict over the last three years.

"We are calling on all parties to the conflict to immediately stop targeting civilians, and for the government of Mozambique to urgently investigate the war crimes we have uncovered."

The report, based on interviews with 79 internally displaced persons from 15 communities, focuses primarily on the impact of the increased fighting in Cabo Delgado since a major attack by 'Al-Shabaab' on Mocímboa da Praia in March 2020.

In several attacks documented by Amnesty International, 'Al-Shabaab' fighters (unrelated to Al-Shabaab in Somalia) deliberately killed civilians, burned villages and towns, and committed heinous acts of violence with machetes, including numerous beheadings and desecration of corpses.

In late March 2020, the town of Quissanga was attacked by 'Al-Shabaab'. Amnesty International spoke to 16 former residents who witnessed the fighting and summary killings, beatings, abductions, burning, and looting in the weeks that followed.

During the attack, several teenagers were abducted. One man told Amnesty International: "They take both boys and girls...Some, they take them to behead. Some, they make the girls become 'wives' and do work in the base. The boys become soldiers."

Many displaced young women and girls said they fled specifically because of the threat of abduction, detention, rape, and forced marriage to 'Al-Shabaab' fighters.

One woman interviewed by Amnesty International was seven months pregnant when she was shot in an attack on a bus in the village of Nguida on 23 July 2020. The fighters ordered everyone off the bus to be executed. She was left to bleed to death, but survived and gave birth two months later. Her husband was killed in the attack.

Government forces have also carried out vicious attacks against civilians accused of collaborating with or supporting 'Al-Shabaab'. The military and police have committed extrajudicial executions and acts of torture and other ill-treatment, and have mutilated bodies.

Three days after the initial attack on Quissanga, government security forces captured civilians they believed were supportive of 'Al-Shabaab'. They blindfolded and shot several men, before dumping their bodies in a mass grave.

Over the next month, government security forces took women to be raped at the nearby base they had set up, where they also detained, beat, and summarily executed more men. One woman told Amnesty International: "People disappeared. They were all taken to the hole to be killed. They come with a list of names, they ask if we know them. And we didn't lie, in case they took us away too."

Amnesty International's Crisis Evidence Lab analyzed and verified a video shared on social media that showed the extrajudicial execution of a naked woman as she attempted to flee Awasse. The unidentified woman was approached by men who appeared to be members of the Mozambique Armed Defence Force (FADM). After beating her with a wooden stick, they shot her and left her naked body on the highway. Four different gunmen shot her a total of 36 times with a variety of Kalashnikov rifles and a PKM-style machine gun.

Amnesty International has previously revealed evidence of the attempted beheading, torture and other ill-treatment of prisoners; the dismemberment of alleged 'Al-Shabaab' fighters; possible extrajudicial executions; and the transport and discarding of a large number of corpses into apparent mass graves.

Mozambican government forces have also failed to live up to their obligation to protect civilians from 'Al-Shabaab' attacks, killings, abductions, and other abuses.

After security forces lost a number of battles with 'Al-Shabaab', the government hired the Dyck Advisory Group (DAG), a South African private military company, to fight on their behalf using armed helicopters.

According to 53 witnesses who spoke to Amnesty International, DAG operatives have fired machine guns from helicopters and dropped hand grenades indiscriminately into crowds of people, as well as repeatedly fired at civilian infrastructure, including hospitals, schools, and homes.

During an attack on the town of Mocímboa in June 2020, DAG helicopters destroyed a hospital as they took aim at 'Al-Shabaab' fighters hiding inside the facility.

"The testimony we have gathered reveals a pattern of repeated, reckless targeting by Dyck Advisory Group," said Deprose Muchena.

"By firing indiscriminately into crowds, attacking civilian infrastructure, and failing to distinguish between military and civilian targets, they have clearly violated international humanitarian law. They must now be held accountable for their actions."

Cabo Delgado has suffered neglect and under-investment for decades, a problem exacerbated by natural disasters and the spread of COVID-19 across the region. The area is rich in natural gas, rubies, graphite and timber, leading international companies to compete for access to the region. Fighting has intensified since 'Al-Shabaab' attacked the northern port town of Mocímboa da Praia in October 2017.

The Armed Conflict Location and Event Data Project estimates that over 1,300 civilians have been killed during the conflict. The UN estimates that more than 530,000 people are displaced within Cabo Delgado, equivalent to one quarter of the province's total population. According to UNICEF, approximately 250,000 of the displaced are children.