Ethiopia: The Ethiopian Hairdresser Rebuilding the Lives of Sex Workers and Migrants 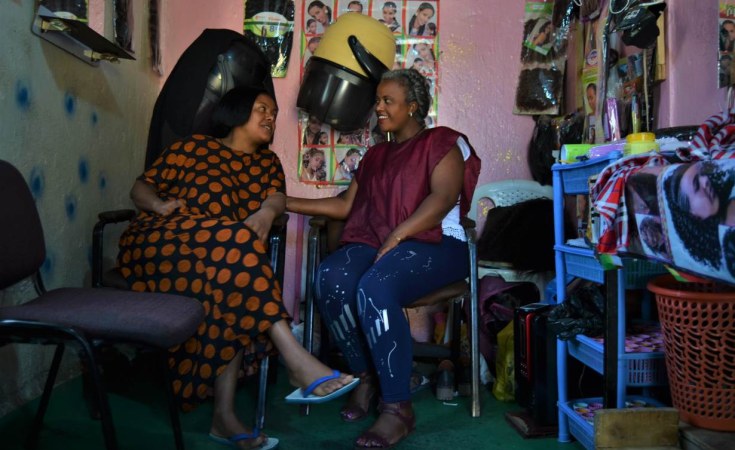 Addis Ababa — "Many of my clients are sex workers. Usually, they don't talk freely about their job because it's a taboo. But when they come here, they tell their stories."

Yenenesh Tilahun was 22 years old when she left Ethiopia in search of a better-paid job to support her family.

She first worked on a farm in Lebanon, then took care of an elderly man in Egypt and finally worked as a maid in Sudan.

While abroad, she was shocked at the way Ethiopians were mistreated by smugglers and employers.

After she fell severely ill, she came home to the capital, Addis Ababa, and vowed she would never leave again. Instead, she would use her experience to deter other women from taking the same dangerous path abroad.

Yenenesh, now 32, opened a tiny beauty salon in the city's biggest red-light district with two other ex-migrants, with assistance from the Bethsaida Restoration Development Association, a local charity supported by the U.S.-based Freedom Fund.

While styling their hair, she gives advice to sex workers at risk of being trafficked and to returning migrants who have joined the sex trade.

Yenenesh's salon is a refuge where these women can relax and take care of themselves - with a shoulder to cry on if needed.

This is Yenenesh's story as told to Ethiopia correspondent Emeline Wuilbercq:

I was 22 when I first went abroad. I worked on a farm near the Lebanon-Syria border where I was collecting firewood.

Pay was very low and yet I had to send money home to support my family back in Ethiopia. I had very little money left for my own survival.

It was very harsh because I couldn't adapt to rural life. I'm a city girl after all - born and raised in Addis Ababa. After almost two and a half years abroad, I went back home.

Shortly after, I decided to migrate again. It was the only way to pay my children's school fees. This time, I went to Egypt where I took care of an elderly man who treated me well.

Finally, I moved to Sudan and became a maid for his son who was an ambassador - that is when I fell ill. When I discovered that I had a brain tumour, my boss supported me and helped pay for my treatment.

While getting chemotherapy, my business visa expired and I had to go back to Addis Ababa on foot via Metema and Gondar. I went through tough times. I was taking sleeping pills and had nothing left. I was sitting idle and was depressed.

One day, I went to the kebele (the smallest administrative unit of Ethiopia) to renew my ID and I was told that a local charity was helping former migrant workers like me. I grabbed the opportunity.

The charity offered me training in hairdressing. That is when I started to recover, little by little.

I felt at ease with other returnees as we were sharing our stories from abroad. Before that, I was ashamed.

With my friends Saba and Almaz, we decided to open a beauty salon in this tiny room next to the youth centre. I have been running this beauty salon for three years in Sebategna where I was born and raised. 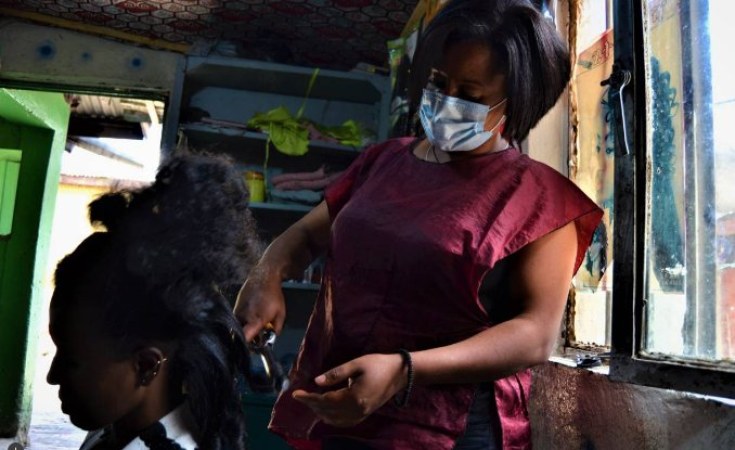 Many of my clients are sex workers. Usually, they don't talk freely about their job because it's a taboo. But when they come here, they tell their stories. Their life is so upsetting.

Some rent rooms until their visas to the Middle East are processed. It's easy to join the sex trade. This area is well-known for its sex workers - including underage girls - who are often addicted to alcohol.

Others are migrants who are coming back from abroad and do not want to return home empty-handed - so they have no other option but to become sex workers out of despair.

Sometimes, they refuse the help of charities due to their addictions, even if this life is unbearable.

Sometimes customers beat them. They even kill some of the women. One woman was slaughtered a few years ago. Another one got stabbed recently.

They say they could not take other jobs because the monthly salary would not be enough and they would be mistreated. This job allows them to get money daily.

The government should find ways in which these women could change their lives for good. It is the government's failure. They know sex work exists but they don't do anything to stop it or at least make it better.

Fortunately, some members of the community - including us - are helping. Sometimes, we share breakfast with them. We also lend them money when they have nothing, even though we have also been hard hit by coronavirus.

Today, our hairdressing job is not profitable but we work so as not to sit idle and go abroad again. We want to live in our country, even though the money overseas is much better.

We don't want to go back because it is unsafe. We have seen it with our own eyes and are now able to advise other women. They trust us.

Even if there are no job opportunities in Ethiopia, I sometimes tell them that it is better to beg in their own country.

I saw women being raped by the delalas - the smugglers. I saw their suffering. Some got pregnant. The way Ethiopians - men and women - are suffering in Sudan, Egypt and elsewhere ... it is horrendous!

I don't want them to suffer like that. I want to change people's minds to save them from the dangers of migration.

I don't want to be a hairdresser all my life. I want to learn, read and change people through education.

My dream is to have a bigger salon where I could hire lots of returning migrants and help them with the advice that I got from the charity that helped me. It has really changed my life.

Hopefully, I will be able to change other women's lives too.

Migrants Turn to Sex Work As Pandemic Sends Them Home 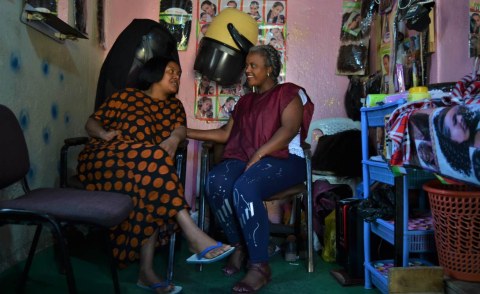 Ethiopia: UN Security Council Fails to Agree on Tigray Peace Call
Tagged:
Copyright © 2021 Thomson Reuters Foundation. All rights reserved. Distributed by AllAfrica Global Media (allAfrica.com). To contact the copyright holder directly for corrections — or for permission to republish or make other authorized use of this material, click here.