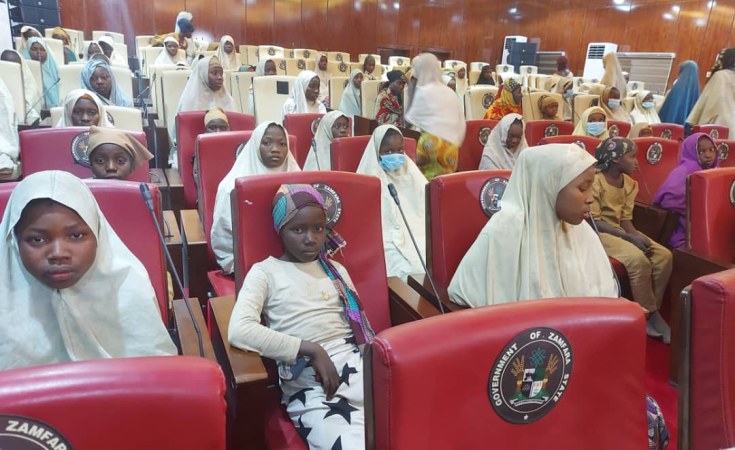 Premium Times
The 317 schoolgirls that were kidnapped from the Government Girls Secondary School, Jangebe, in Talata Mafara Local Government Area of Zamfara State
This Day (Lagos)
By Ejiofor Alike and Emmanuel Okonji

One person was feared dead and others reportedly injured yesterday when a mob invaded the venue of the reunion of the 279 students of Government Secondary School in Jangebe, Zamfara State at the school premises.

This is coming as the Zamfara State Governor, Mr. Bello Matawalle, has accused the watchman of Government Secondary School of alleged involvement in the abduction of the schoolgirls on February 26.

Matawalle has also disclosed that he was not intimidated by the no-fly zone declared on his state by the federal government, stressing that he was ready to resign if that could bring about peace in the state.

According to ARISE NEWS Channels, the broadcast arm of THISDAY Newspapers, three people were fatally shot when the reunion of the schoolgirls with their parents turned violent.

The report disclosed that at least one of the shot victims was confirmed dead while the other two were fatally injured by the military.

The incident occurred when locals took up stones and other weapons expressing outrage over the long speeches being delivered by government officials.

THISDAY gathered that the parents had waited for several hours before the government officials arrived from Gusau, the state capital, with the students.

The situation, it was gathered, went out of hand when the government officials started making long speeches instead of handing over the students to their parents.

"When the parents became tired of the long speeches, they went inside by force to take their children home. The approach adopted by security agents to restrain the parents angered the youths, who started throwing stones, smashing windscreens and attacking people with weapons," a journalist who witnessed the incident told THISDAY.

ARISE News also reported that the locals then invaded the school premises disrupting the process while government officials were still making remarks before handing over the students to their parents.

The Zamfara State Education Commissioner, Mr. Ibrahim Abdullahi, fled the scene immediately the chaos started while vehicles conveying journalists were attacked but no journalist was hurt.

Meanwhile, the state governor, Matawalle, has alleged that the watchman of the school was involved in the abduction of the schoolgirls on February 26.

The governor, who spoke last night on a live TV programme did not reveal the identities of other personalities behind the abduction of the schoolgirls.

He said information at his disposal indicated that the school's security guard aided the bandits in whisking the students away.

"The children have mentioned that after releasing them, the bandits were telling them to greet the watchman for them. They even mentioned his name that he is the one who gave them the go-ahead to come, that he was involved.

"They have said it in front of the Commissioner of Police in Zamfara State. I assure Nigerians that investigation will be carried out and all people involved will be known," he said.

Speaking further, the governor said that he is ready to resign if that will end insecurity in the state.

Reacting to President Muhammadu Buhari's declaration of his state as a 'no-fly zone', the governor said: "I am ready to accept any solution that will bring security to my state.

"I am not intimidated. If I know that my resigning as a governor will make the people sleep with their two eyes closed, I can resign. I am ready to do what will bring security. I am not power-hungry. I have been having sleepless nights to protect the people of Zamfara State."

Matawalle argued that he had no issue with the no-fly-zone declared by the federal government.

He, however, insisted that the Security Council should have invited him before making some decisions.

There have been unconfirmed reports that bandits get the supply of firearms via their conspirators who deliver the arms through aircraft.

Reacting to reports that the bandits got firearms through aircraft, the governor described such reports as a misinformation, challenging anyone who has any evidence to come forward with it.

"It is just misinformation and if anybody has that proof, he should prove it beyond a reasonable doubt," Matawalle said.

He said: "I am a parliamentarian, I was in the House of Reps for almost 12 years, I know what happened during (the) Obasanjo (era) when he declared a state of emergency in Plateau State, which was challenged and the Supreme Court reversed it.

"The emergency rule means that they shall put more security in the area so that they can flush out all the criminals.

"If the National Security Adviser thinks that he can do something about it, let all the states, all the northern states that are affected (by banditry) be put on emergency, All the governors will welcome that because all we need is how these bad elements can be flushed out."

Matawalle also disclosed that those who abducted the schoolgirls from Government Secondary School, Jangebe are of Hausa and Fulani ethnicity.

According to him, "They say most of them are Hausa and some of them are Fulani. In fact, they even asked the school children to pray for them. So, they say they are of different entities contrary to the thought that they are all Fulani. 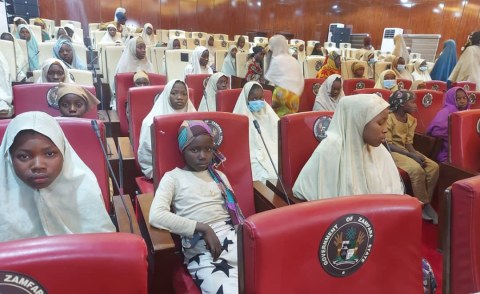 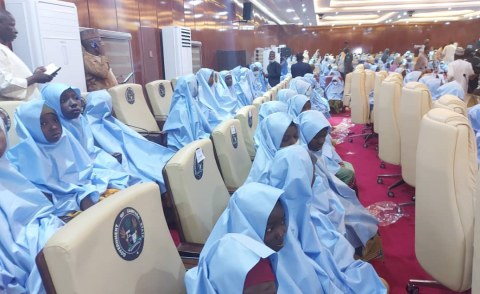 Relief in Zamfara as Abducted Nigerian Schoolgirls Released
Tagged:
Copyright © 2021 This Day. All rights reserved. Distributed by AllAfrica Global Media (allAfrica.com). To contact the copyright holder directly for corrections — or for permission to republish or make other authorized use of this material, click here.