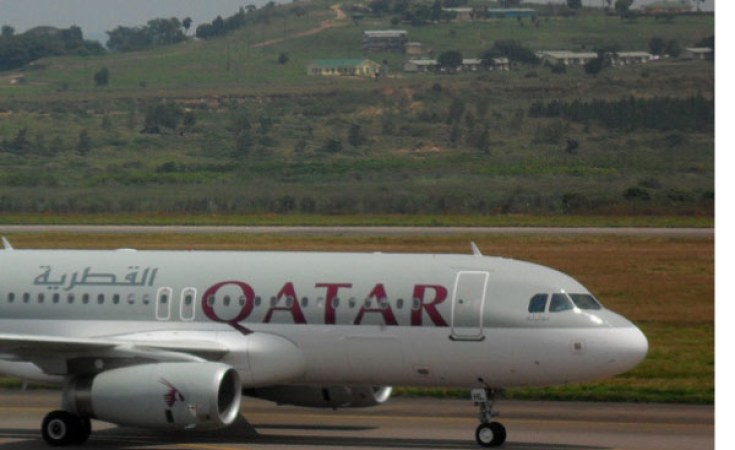 Qatar Airways continues demonstrating its commitment in Africa and in response to strong demand, has operated its largest twin-engine aircraft, the Boeing 777 to Entebbe and Kigali for the first time.

"This aircraft will be operating on Monday, Wednesday, and Friday. Its official flights started Monday this week due to an increase in the number of passengers from 200 passengers on average over 400 passengers per day," the Qatar Airways Vice President Africa, Mr Hendrik Du Preez, said in a statement released on Monday a few hours after the aircraft landed from Doha to Entebbe at 6:00am.

He said that by June this year, they will be operating four times a week.

"Frequency will increase in June and we shall be operating on Tuesday, Thursday, Saturday, and Sunday. The state-of-the-art aircraft (B777) features 24 seats in Business Class and 388 in Economy class compared to the dream liner Boeing B787 which carries 22 business class and 232 economy class," Mr Hendrik said, adding: "We are proud to be the leading international carrier connecting Rwanda and Uganda with Asia, Europe, the US, and the Middle East. From 33 routes at the height of the pandemic, we have rebuilt our global network to more than 900 weekly flights to over 130 destinations, supporting the Rwandan and Ugandan Diaspora with more flexible and seamless travel options to visit family and relatives."

Mr Vianney Luggya, the Manager Public Affairs Uganda Civil Aviation Authority (UCAA) said: "The fact that Qatar Air has started operating a bigger aircraft of that capacity to Entebbe is a welcome development and a vote of confidence. Emirates is the other airline that operates a Boeing 777 to Entebbe."

He added that while international passenger traffic in and out of Entebbe International Airport was 1,980,000 passengers in 2019, the numbers reduced to 565,541 in 2020 owing to the long spell during which commercial passenger operations were suspended as a result of the COVID-19 pandemic.

Since the resumption of flights in October 2020, the numbers are increasing slowly. An average of 1,863 passengers per day was recorded in January 2021 with 24,095 arrivals, 29,409 departures, and 4,279 in transit. Before the outbreak of the COVID19 pandemic, Entebbe International Airport handled an average of 5,400 passengers per day in 2019.

Qatar Airways operates three-weekly flights from Entebbe and Kigali and 90 weekly flights in total from Africa. Passengers traveling from African connect seamlessly with the widest network in the US, Asia, and Europe via the Best Airport in the Middle East.