Congo-Kinshasa: Children in Congo Turn to Motorbike Taxis for Work As Covid-19 Bites 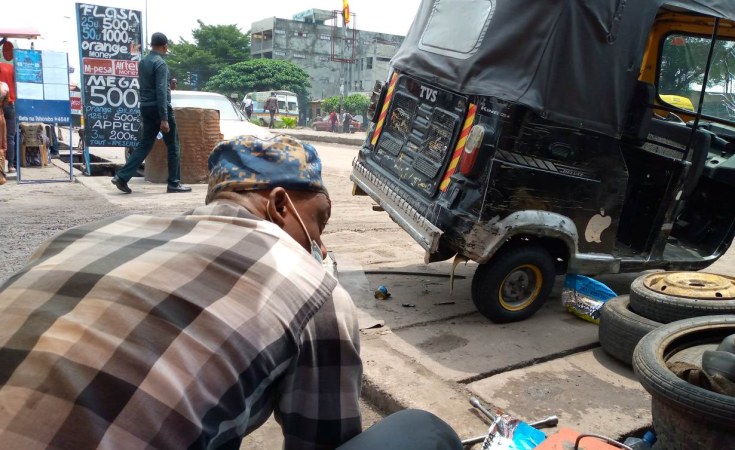 Kinshasa — With schools shut due to the pandemic, many Congolese children are illegally driving motorcycle taxis to support their families

Congolese teenager Bienvenu dreams of owning a clothing business but spends his days illegally driving a motorbike taxi in busy Kinshasa to support his family during the COVID-19 pandemic.

Navigating traffic and dodging cops in the Democratic Republic of Congo's capital, the 16-year-old has been working as an underage moto-taxi driver - the legal minimum age is 18 - since his uncle lost his travel agency job five months ago.

Bienvenu is one of thousands of Congolese children estimated by charities to have joined the labour force over the last year due to the new coronavirus. As schools shut, many children started working to help put food on the table at home.

Bienvenu - whose full name has been withheld - wants to stop driving but his relatives now rely on his income.

"It's not my choice to do this job. I decided to do it in order to help my family, with my uncle's blessing ... every night I bring my earnings home," he told the Thomson Reuters Foundation, sitting in a parking lot while scanning for clients.

With no reliable public transport, an informal network of moto-taxis - known as "Wewa" - is the main way many people in Kinshasa move around. Moto-taxis often carry whole families and huge deliveries while weaving through traffic.

"If I can find a secure job, I want to quit. I dream of one day being a great clothing merchant," Bienvenu said. Working six days a week, most of his earnings go to the moto-taxi owner, leaving him with about 3,000 Congolese francs ($1.50) a day.

On the streets of Kinshasa - a sprawling metropolis of 17 million people - countless children sell everything from bags of crisps to face masks. Their ranks are swelling due to the economic fallout of COVID-19, child rights campaigners say.

About three-quarters of Congo's 90 million people live in extreme poverty - surviving on less than $1.90 a day - and the African Development Bank has warned that its export-reliant economy could be particularly hard hit by the pandemic.

Congo is a key global producer of copper and cobalt and mining accounts for about a third of its national output. The pandemic slowed demand for metals last year, leading to mine closures and job cuts, but prices are recovering.

With more children seeking jobs to support their families, working for a moto-taxi owner is the most lucrative and appealing option, according to Annie Bambe, head of the NGO Forum for Youth and Children's Rights in Congo (FODJEC).

"At first, it's like a game and then it becomes a job," Bambe said. "Adults should refuse to ride on motorcycles driven by children ... owners must stop using children to make money."

"No-one stands up to condemn this work," she added.

The National Road Safety Commission, part of the transport ministry, said it had limited resources to stop underage drivers and that traffic police could not "regulate the situation".

"Everyone must get involved, in particular the mayors and heads of neighborhoods to discourage these children from driving," said Jean Bome, the commission's executive secretary.

Prior to the pandemic, about 15% of children aged 5 to 17 in Congo were engaged in child labour - mostly doing dangerous work - a 2019 report by the National Institute of Statistics found.

From the age of 15, children in Congo are permitted to do light work for a maximum of four hours per day with the approval of labour inspectors, but the legal driving age is 18.

Boys like Bienvenu have tactics for evading fines or arrest.

"I try not to arrive at crossroads where I can easily cross the path of traffic cops. If I am pulled over, I know how to negotiate with them," Bienvenu said, explaining how he had paid bribes worth about 5,000 francs to avoid punishment.

One moto-taxi owner, Patrick Maweja, said he did not hire children but knew of several others who did because they saw young drivers as hard-working and reliable.

And the head of the Association of Moto-Taxi Drivers in Kinshasa's Tshangu district, Jean-Pierre Kabangu, said he did not condone underage moto-taxi drivers but recognised that the pandemic gave some children no choice but to work.

For these children, Kabangu offered some advice.

"Underage drivers are asked to circulate in outlying districts and not to drive on the boulevard, which is very dangerous," said Kabangu, whose association supports moto-taxi drivers and helps to mediate in disputes with traffic police.

Bambe of FODJEC said parents were also to blame for failing to stop their children from working as moto-taxi drivers.

"For many parents, the important thing is that the child brings back the fruits of their labour at the end of the day."

This rings true for 17-year-old Joel who started driving his father's moto-taxi in December while school was shut and plans to juggle working with his education, which has since resumed.

Joel said he sometimes feels ashamed when his classmates see him driving the moto-taxi, but must work to support his family.

"They don't know that this job enables me to study," said Joel - whose full name has been withheld - while fixing a flat tyre in a garage. "It's my family's bread and butter."

(Reporting by Jordan Mayenikini; Writing by Emeline Wuilbercq; Editing by Kieran Guilbert and Katy Migiro. The Thomson Reuters Foundation is the charitable arm of Thomson Reuters, and covers the lives of people around the world who struggle to live freely or fairly. Visit http://news.trust.org)