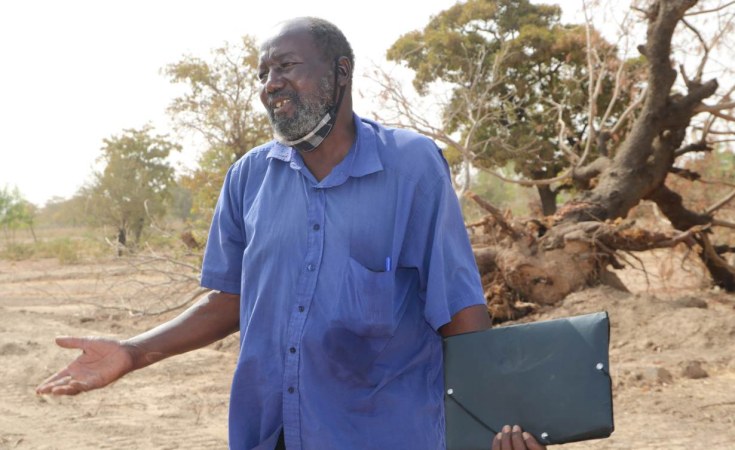 Boassa, Burkina Faso — Unfair or illegal deals pit neighbours and families against each other as Burkina Faso aims to build 40,000 new homes

While Joanny Nakoulima was visiting neighbours in January, bulldozers blazed through his farm in central Burkina Faso unannounced, destroying his crops within minutes.

The machines belonged to a property developer that claims it was granted the right to develop his land and that of other residents in Boassa village, as part of a government drive to increase affordable housing across the country, Nakoulima said.

"I'm frustrated and I'm afraid," said the 66-year-old farmer, standing in front of a row of severed trees on his farm. "I'm powerless. But I know that one day the truth will be revealed ... because I won't give up."

Conflict over land in the West African nation has been ongoing for years, fuelled by competition between farmers and cattle breeders for territory, pasture and water, say locals and land rights advocates.

But a recent push by the government to develop rural land for housing, with the help of property companies, is inflaming tensions as locals say they are being exploited by developers and the government is doing little to help.

Nakoulima said he has written letters to several government ministries demanding protection against what he considers to be "forced occupation of the land". So far, he has heard nothing back.

Alain Traore, programme manager for the Association for Environmental Management and Development, a local aid group, describes the issue as a "ticking time bomb".

More than 70% of Burkina Faso's population lives in rural areas, according to World Bank data, and most of them survive on natural resources which are already scarce due to climate change, Traore noted.

The expansion of real estate into these areas is intensifying the competition for those resources, he told the Thomson Reuters Foundation.

That could worsen the violence in a country already suffering through an Islamic insurgency that has killed thousands of people and displaced more than one million in the past two years, according to the United Nations.

"If the land issue is not properly regulated it will generate more and more fighting and eventually it may create a widespread conflict that's hard to control," he said.

When Burkina Faso President Roch Marc Kabore first came to power in 2015, his platform included the promise to build 40,000 affordable homes through a national housing programme.

The project launched a year later, and since then 275 real estate developers have been involved, said housing minister Benewende Stanislas Sankara at a press conference last week.

According to government figures, more than 5,360 homes have been built so far.

But complaints of "so-called land grabbing" have prompted the ministry of housing and urban planning to suspend the validation of new construction requests while it focuses on reforms for the sector, he said.

Those reforms could lead to changes to Burkina Faso's 2009 land tenure law, including stricter enforcement, he added.

"The law was passed for the sake of the people and if this law doesn't fit the people, it must be revised to adapt to the context," Sankara told the press conference.

Sam Mednick/Thomson Reuters Foundation
Locals in Boassa sit in the village center discussing concerns about having their land being taken away in Burkina Faso, February 5, 2021.

By the time of publication, the ministry had not responded to questions about how the government plans to change the land law, what exactly the suspension covers or how it affects the 40,000 houses project.

The land law includes protections to ensure landowners are being paid fairly - for example, any sale above 10 hectares (24 acres) has to be signed off by the government.

But Nakoulima and others say some companies take advantage of impoverished communities who do not know their rights.

Sometimes the developers buy property for less than it is worth or make unilateral deals with one landowner without consulting the rest of their family, who all legally own the land, villagers and lawyers said.

In 2017, Nakoulima and several others in his community agreed to transfer 225 hectares (556 acres) to three property companies, who said they would use half the land for public services - such as schools and hospitals - and the other half for housing.

The companies agreed to give the villagers 12 plots of 250 square metres each to live on, he explained.

But while these negotiations were underway, local real estate developer Saha Immobilier was making separate deals for land belonging to some of the same residents, Nakoulima said.

Now the company, which is one of the firms working with the government on the 40,000 houses project, is laying claim to all 225 hectares, including the land on Nakoulima's farm, and offering the villagers only five plots in return.

"(The company) lied. They said they came to discuss with us and that we had agreed that they could come do the job. When was that? We never saw them," he said.

'THEY WILL KILL ME'

Land rights lawyer Fako Bruno Ouattara said he is building a court case to ask for an emergency judgment to force Saha Immobilier to stop its activities in Boassa.

Ouattara said cases of developers exploiting landowners in the midst of the housing push are rampant throughout the country.

"There's no assistance for the population, nothing. Farmers don't know anything and so they are easily manipulated," he said in an interview at his office.

Idrissa Barry, director of land for the ministry of territorial administration, said the government does not currently have the manpower or the funding to implement or enforce the land law.

For starters, the government would need to set up rural land services to advise people on their rights.

That would require recruiting and training two agents per district, and currently less than half of the country's 351 districts have any land agents at all, he explained.

"Unfortunately, it's a very (financially) demanding law and the government doesn't have the money," he said in an interview.

The locals in Boassa village say the government's push to boost housing is pitting communities and families against each other.

Nakoulima has already received death threats from his cousins, who are angry at him for not wanting to sell the land.

Legally, the sale of property owned by a family needs approval from every family member, he explained.

(Reporting by Sam Mednick, Editing by Jumana Farouky and Zoe Tabary. The Thomson Reuters Foundation is the charitable arm of Thomson Reuters, and covers the lives of people around the world who struggle to live freely or fairly. Visit http://news.trust.org)