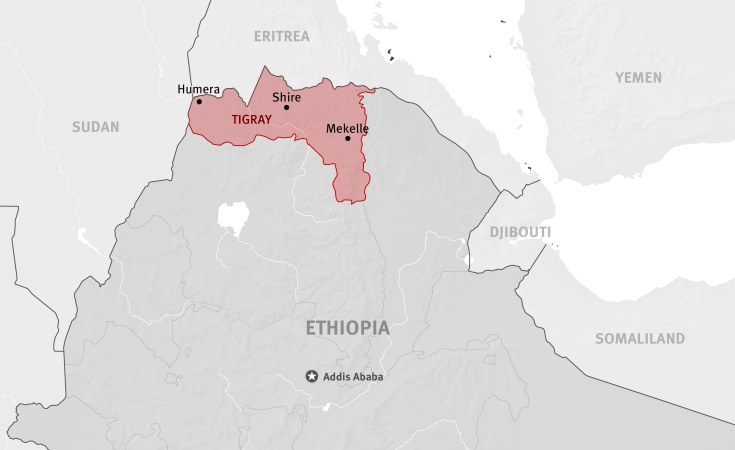 Ethiopian authorities on Wednesday released a BBC reporter and several other media workers detained in the past few days by the military in the war-torn northern Tigray region.

Mr Girmay Gebru's release followed pressure from global media watchdogs and press freedom rights groups. He was released without any charge, and no official reason has been given for his detention.

Within four days starting from the weekend, the Ethiopian military detained five journalists and other media workers who were covering the conflict in Tigray.

This is probably the highest number of journalists and media workers to be arrested in such a short time since Nobel Peace Prize winner and Ethiopian Prime Minister Abiy Ahmed assumed office in 2018.

On February 27, soldiers arrested two translators - Mr Fitsum Berhane, working with an Agence France-Presse (AFP) news crew and Mr Alula Akalu, working with the Financial Times (FT), and local reporter and fixer Tamrat Yemane, according to reports by the AFP, the FT, and two journalists who spoke to the Committee to Protect Journalists (CPJ) on condition of anonymity, citing fear of reprisal.

Mr Gebru, a reporter with the BBC's Tigrinya-language service, was arrested on Monday alongside four other people at a cafe in the regional capital, Mekelle.

Nothing is known of the fate of the four others who were arrested with him.

According to witnesses, Mr Gebru and the four others were arrested by people in military uniform and were taken away in a car escorted by two military vehicles.

According to the BBC, the reporter was taken to a local military camp where the federal north command forces had previously been stationed.

It is not clear why they were arrested.

A spokesman for the BBC yesterday said: "We have expressed concern to the Ethiopian government officials and we are awaiting a response."

"The scarcity of independent reporting coming out of Tigray during this conflict was already deeply alarming. Now, the Ethiopian military's arrest of journalists and media workers will undoubtedly lead to fear and self-censorship," said CPJ's sub-Saharan Africa representative, Ms Muthoki Mumo.

"Ethiopian authorities should release these journalists and media workers immediately and provide guarantees that the press can cover the conflict in Tigray without intimidation" added Ms Mumo.

On February 24, the Ethiopian government allowed seven selected foreign media outlets to cover Tigray after a media blackout in the region for months.

Two days later, an Ethiopian ruling party official warned that the government will take action against false and misleading reporting on the conflict in Tigray.

AFP, BBC and FT are among the seven international media organisations that got permission from the Ethiopian Broadcasting Authority and the Ministry of Peace to report from Tigray.

In a statement, Mr Phil Chetwynd, director of AFP Global News said there were no charges pressed against Mr Fitsum Berhane and "His collaboration with a media outlet should not be a motive for his arrest, and we call for his immediate release."

The Financial Times said it was taking every possible step to ensure release of the jailed journalists.

"Our concerns have been raised with the relevant authorities as we work to understand the reasons for the arrests," a spokesperson for the newspaper told Reuters.

The region has been under military command since last November, after Mr Ahmed announced a military operation against Tigray to oust the Tigray People's Liberation Front (TPLF), the former regional party, and now an insurgent group.

Later that month, after government forces took control of the region's capital, the PM officially announced that the war in Tigray was over.

However, clashes between federal forces and forces loyal to TPLF have continued in many parts of the region and a state of emergency remains in place.

There are also reports of killings and various forms of mass human rights violations, as well as grave humanitarian crises in the region.