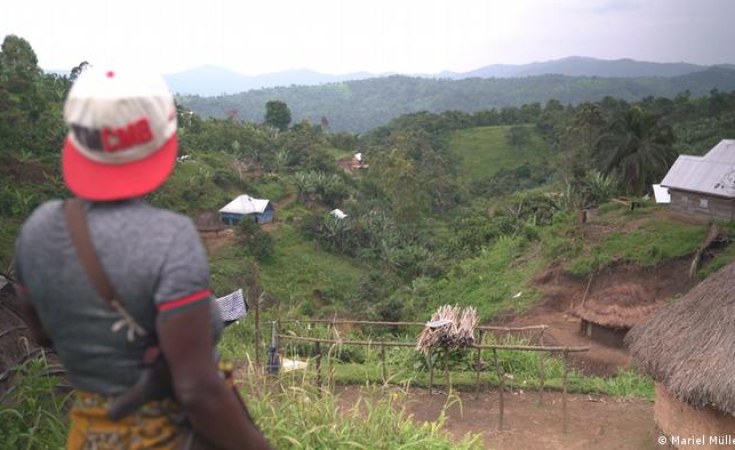 In eastern Congo, militias killed more than 2,000 people in 2020. The many rebel groups in the volatile region have several women as members. DW met a female combatant who was a victim of violence before taking up arms.

"They killed almost my entire family and raped me. There was no future for me. I couldn't go on with my life as before, so I decided to become a fighter to get revenge."

I can barely look into Faida's red-rimmed eyes. Most of the time, she avoids my gaze and stares at the ground or the gun in her hands. She sometimes laughs briefly when she talks to me, but it is an ironic and bitter laugh.

We walk through a beautiful, mountainous landscape with lush green hills where black-and-white cows graze. It looks like Switzerland. But that's where the similarity ends. We are in North Kivu in the eastern Democratic Republic of Congo, a few kilometers from the village of Masisi.

We left the last checkpoint controlled by the Congolese army behind us hours ago and march with Faida and three other rebels through the so-called no man's land -- a stretch of terrain controlled neither by the Congolese army nor by a specific rebel group, and where fighting often occurs. We have an appointment with a rebel group deep in the forest. Faida and her armed comrades are here to give us safe passage to their nearby base.

Sexual violence as a weapon

"Mama Faida," as her comrades call her, is the mother of six children. She joined the armed group 17 years ago. She will never forget how it happened. She was 15 years old and working in the fields with her father, as usual, when some men armed with machetes came and beat up her father in front of her. After that, they kidnapped Faida. To this day, she can't openly talk about what happened next. "Six of them took me away," she says. I ask if she was raped. She slowly nods.

Rape, especially in the conflict zones of the Democratic Republic of Congo, is widespread. Aid organizations estimate the number of survivors could be over 200,000. Militia members rape women, men and children. The goal is to terrorize civilians and drive them from resource-rich areas or fertile farmland. Sexual violence is systematically used as a weapon of war. Survivors like Faida often take years to recover mentally and physically. "I felt like I was defeated. My life defeated me," she says.

"If I could find the men who did this to me, I would shoot them immediately," she says. That day, they also murdered her mother and brothers among a total of four women, eight men and two children, she adds. Faida blames the FDLR group (Democratic Forces for the Liberation of Rwanda), a Rwandan rebel group founded by Hutu extremists that came to Congo to murder, steal and rape after the 1994 Rwandan genocide. It was this same rebel group that had also killed her husband.

As a widow and rape victim, she was cast out from the community of her family and friends. Severely traumatized and completely on her own, she struggled to find food for her two children every day.

One day, a former teacher from the provincial capital of Goma came to her village. "General Mbura," as they call him here, was seeking fighters to join him in the battle against the FDLR. Faida was one of those who got in touch with him, united by a desire for revenge. Around 3,800 people supported Mbura at his peak. There are currently 43 women in the ranks of his armed group, 27 of whom had been raped. Many of them have survived atrocities similar to Faida's.

Militia leader Mbura says he controls about 20 villages. The fighters say they haven't seen UN soldiers in years. "They don't dare come here." In general, the rebels think little of the UN soldiers. "They couldn't protect our wives and daughters from the FDLR either."

However, the group may well have swerved from its avowed original aim over the years.

"Even if these armed groups may have had a political goal at the beginning, that is long gone," Mathias Gillmann, spokesman for the UN peacekeeping force in the Democratic Republic of Congo (MONUSCO), told DW. "The vast majority of them are and remain bandits who enrich themselves from and oppress the civilian population."

The United Nations estimates that armed militias killed more than 2,000 people and that more than 5.5 million were displaced in three eastern Congolese provinces last year. DR Congo is the African country with the most internally displaced people.

Faida is grateful to the militia leader for taking her in. For her, the group offered more than a chance to take revenge on her family's killers: It was her only chance to survive. It gave her a sense of security and self-determination again -- and most importantly, she and her children got food regularly.

Some members of the militia always go to the fields, Faida tells us, where they grow crops for themselves. In addition, farmers donate part of their harvest to the militia. No one in the group wants to admit that villagers are forced to do this under threat of violence. But on the way to the village, we watch as a woman who has seen the armed rebels fearfully drops her baskets full of cassava and runs away.

The longer we talk to Faida and the further we get from her comrades, the clearer it becomes that she joined the group to survive rather than out of conviction. "They killed my family. If that hadn't happened, I would never have become a fighter," Faida says. "I have never shot anyone. Whenever the others went to fight, I stayed with the children. I only ever carry the gun with me because it's my job."

Dreaming of a better future

In recent years, she has often thought about leaving the militia. "I keep hearing about people running away, but I think to myself: How could I run away? I don't have a country. If I run away, I won't have anyone to help me build a life."

Where would she be now if the rebels had never attacked her family? "I would have a good life with my husband -- just like other people. But that opportunity was taken away from me."

Her dream is to one day trade the gun for a piece of land and finally return to normal life as a farmer's wife, she says. "I love working in the fields. I would love to do that every day." She now has six children. She won't say by whom. She hasn't married again -- although she would like to. "But after everything that's happened to me: Who would marry me?"

She now puts all her energy into her children and into the hope that their lives will be free of violence. "If God blesses my children and me, I will at least be able to give them an education."

The report has been adapted from German by Chrispin Mwakideu

What's to Show for Zimbabwe's 41 Years of Independence?
Human Rights