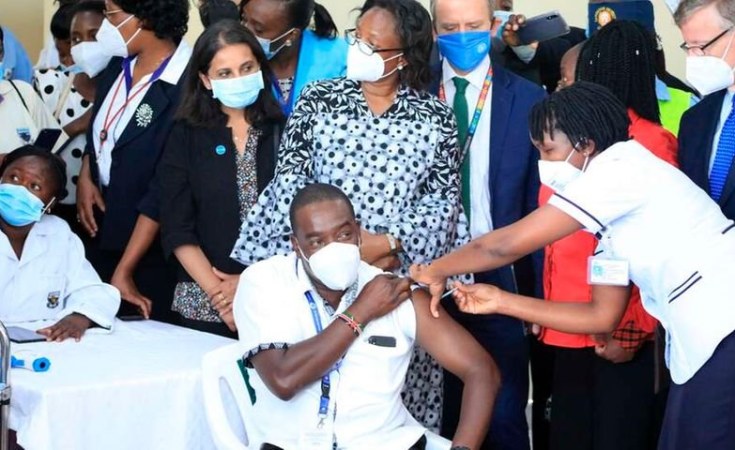 It's almost a year since the first Covid-19 positive case on Kenyan soil was announced and indeed, the virus has come with a fair share of problems.

Kenyan borders were closed for several months and for the sporting world, competitions came to a screeching halt.

Kenya is known of it's prowess in distance running where many athletes depend on competitions across the globe to earn a living. But this has not been the case for the last one year with most races cancelled and Kenyan stars unable to travel to fend for themselves.

The Tokyo Marathon, London Marathon, Valencia Marathon and Taipei Marathon are some of the few races that did take place, albeit under "bubble" conditions thus locking out many competitors out who have since been struggling to put food on the table.

Boston Marathon champion Lawrence Cherono was among the first athletes to be affected after this year's iconic Boston race was cancelled due to the coronavirus pandemic just when he had finished his training programme and preparations for a title defence.

He had programmed a defence of his Boston Marathon title last April before heading to the Tokyo Olympics Games later in August last year and end the year at the Chicago Marathon.

But all the races were cancelled.

As as if that was not troubling enough for Cherono, a doctor at an Eldoret hospital detected a problem in his daughter's heart that needed a surgery, something that hit the marathon champion hard.

Cherono says his daughter used to sweat a lot while breastfeeding and eating.

Upon going to the Shoe4Africa Hospital in Eldoret for check-up, he was advised to seek further medical treatment from a specialist.

Further tests were done at Eldoret's Tophill Hospital and a decision was reached for her to be operated on.

"The hole in the heart kept increasing and it was getting hard for me to get a hospital to operate on her. We finally settled for Mater Hospital which have been doing such procedures," added Cherono.

Renata Jebet, who is one year and seven months old, underwent a successful heart surgery last week at the Mater Hospital in Nairobi.

The Cardiac Programme at the Mater Hospital was started in 1995 to cater for children from economically-disadvantaged background with heart ailments and the first open-heart surgery was performed in 1996.

This initiative is in line with the Values of the Sisters of Mercy, which emphasise compassion for all and seek to uplift the lives of the underprivileged in the society.

To date, over 4,000 heart procedures have been performed courtesy of the support from well-wishers, sponsors and doctors.

"The main fundraising avenue for the programme is the annual Mater Heart Run which did not take place last year due the Covid-19 pandemic and restrictions on social gatherings," The Mater Hospital told Nation Sport.

"We may not also be able to hold the Heart Run this year due to the same restrictions. This has had a significant negative impact on the programme due to lack of funds hampering our efforts to carry out lifesaving cardiac procedures on these needy children."

This meant that Cherono has had to settle the entire bill for Jebet's procedure which costs between Sh1.4 million and Sh 2 million, depending on the recovery.

"It was a double blow for me because the races we depend on had been cancelled till further notice," narrated Cherono, who was accompanied by his wife Winny.

"The total bill shocked me because it also came at a time where there are no races and it has overstretched me.

"The bill will depend on how my daughter will recuperate because after the surgery, as she has to be monitored for some time," said Cherono.

Cherono and his family have been forced to stay in a hotel in Nairobi's South B area while he goes for training at Ngong in Kajiado County very early in the morning before going back to the hospital to join his family, something he said was physically and emotionally draining.

But Cherono is lucky that his management - Italy-based Rosa Associati headed by Dr Gabriele Rosa - and shoe sponsors have been able to advance him money to foot the bill, giving him time to recover financially as the season opens up.

Dr Rosa, 79, is credited with the development of Kenyan marathon running from the 1990s and has nurtured Kenyan marathon greats like former world half marathon and full marathon record holders Moses Tanui and Paul Tergat, along with Margaret Okayo, holder of the women's course record at the New York City Marathon (2:22:31).

"Along with Brigid Kosgei, Lawrence is one of our top athletes and we must support him," Rosa said from Italy. "We are happy that the procedure went well and that the young girl is doing well now," added Rosa, himself a cardiologist.

But not all athletes have been as lucky as Cherono to get such support from their management.

Like Caroline Chesir, an upcoming road race athlete, who joins the list of the many sportsmen and women who depended on races in the Asian countries for a living and who have been adversely affected by the cancellation of these races.

Her hopes to develop her career just like other competitors was brought to a halt by the virus.

In May, 2020, her mother, Peris Chesir, developed some complications in her stomach and she was hospitalised at the Kapsowar Mission Hospital where she was treated and discharged.

In November, the same problem developed and she was taken to Moi Teaching and Referral Hospital in Eldoret where she could not be admitted due to the medics' strike and the family was forced to look for a private hospital.

She was admitted at the Real Hospital in Eldoret. She was diagnosed with colon cancer but could not be released due to a Sh700,000 bill, forcing the family to surrender their title deed.

"We have exhausted all our finances and since there is no race that I have participated since 2019, it became a challenge to take care of my mother because the other siblings have no jobs.

"We are organised a fund-raising next month so that we can clear some of the bills and at the same time she is hospitalized and we have no other option," said Chesir.

Her mother is currently hospitalised again at the Racecourse Hospital in Eldoret where she is to undergo chemotherapy. But there are no funds yet for the process.

This is the situation many athletes are going through, a calamity that came with the coronavirus pandemic and something no sportsperson thought would suddenly arise.

During the lockdown, Athletics Kenya mitigated by providing food rations to needy athletes with world marathon record holder Eliud Kipchoge running a feeding programme for these athletes through support from the Eliud Kipchoge Foundation and other sponsors.

Next month's Eldoret City Marathon will, therefore, have added significance when it's held on April 11 on the streets of the Uasin Gishu capital.

Because, being Africa's richest marathon, it will offer elite athletes an opportunity to earn prize money right in their backyard after missing out on numerous global races cancelled by the pandemic.

According to two-time Boston Marathon champion Moses Tanui, who is also the Race Director of the Eldoret City Marathon, many athletes have been affected financially by the coronavirus pandemic after races were suspended since last year.

Tanui revealed that thousands of athletes are suffering silently and this may affect them psychologically since they are just training with no race to participate in.

"The athletes have gone through tough times because there were a good number of races across the globe and they used to participate in. Training and waiting has affected many and we hope that things will normalise soon so that they can get something to put on the table," said Tanui.

He also urged athletes to register and participate in the Eldoret City Marathon where top 20 athletes in each category shall be rewarded.