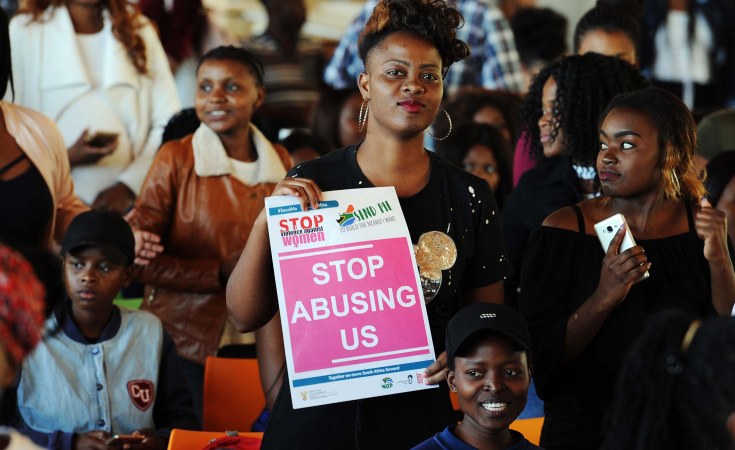 GCIS/Flickr
Students at the Tshwane University of Technology in South Africa protest in 2018.
allAfrica.com

Shocking levels of violence inflicted by men upon women are reported in a United Nations study published today. The analysis shows that in Sub-Saharan Africa, one in every three women in marriages or other partnerships with men suffer abuse.

A report on the study was released in Geneva and New York by the World Health Organization (WHO), which was part of an inter-agency group - including UN Women and the UN Children's Fund - which conducted it.

The report estimates that an average of one in four women in the world aged from 15 to 49 (27 percent) have experienced physical or sexual violence from their husbands or men defined as “intimate partners”. In Sub-Saharan Africa the figure is 33 percent. Only women in some Pacific nations and Southern Asia are in a worse position.

The new study distinguishes between violence within relationships and sexual violence perpetrated by “non-partners” - which can include strangers, acquaintances, friends or male relatives and is defined as actions ranging from rape to unwanted sexual touching, but not sexual harassment.

In the category of violence against non-partners, Sub-Saharan Africa has a better record than high-income nations, with six percent of women aged 15 to 49 years reporting sexual violence during their lifetimes. This compares with 10 percent in Northern Europe, 15 percent in North America and 19 percent in Australia and New Zealand. (However, the report also warns that the stigma attached to sexual abuse often means it is under-reported.)

Reacting to the report, UN Women's executive director, Phumzile Mlambo-Ngcuka, highlighted that the violence was at its worst for women aged 15 to 24, who, she pointed out, might also be young mothers.

“And that was the situation before the pandemic stay-at-home orders,” she added. “We know that the multiple impacts of Covid-19 have triggered a 'shadow pandemic' of increased reported violence of all kinds against women and girls.”

In this category of partner violence, women in the Democratic Republic of Congo are the worst-off in Africa, with 47 percent of women between 15 and 49 reporting it in their lifetimes, and 36 percent reporting it in the last 12 months.

The UN agencies compiled estimates from more than 300 studies conducted in more than 150 countries over an eight-year period. WHO said the study was the largest ever of the prevalence of violence against women.

“Violence against women is endemic in every country and culture,” said Dr Tedros Adhanom Ghebreyesus, the WHO director-general, said in a news release accompanying the report.

The report adds: “It is not a small problem that only occurs in some pockets of society; rather, it is a global public health problem of pandemic proportions, affecting hundreds of millions of women and requiring urgent action.”

Dr Tedros called for “deep-rooted and sustained efforts – by governments, communities and individuals – to change harmful attitudes, improve access to opportunities and services for women and girls, and foster healthy and mutually respectful relationships.”

The report advocates a range of steps to combat violence against women:

“Sound gender transformative policies, from policies around childcare to equal pay, and laws that support gender equality;
“A strengthened health system response that ensures access to survivor-centred care and referral to other services as needed;
“School and educational interventions to challenge discriminatory attitudes and beliefs, including comprehensive sexuality education;
“Targeted investment in sustainable and effective evidence-based prevention strategies at local, national, regional and global levels; and
“Strengthening data collection and investing in high quality surveys on violence against women and improving measurement of the different forms of violence experienced by women, including those who are most marginalized.”