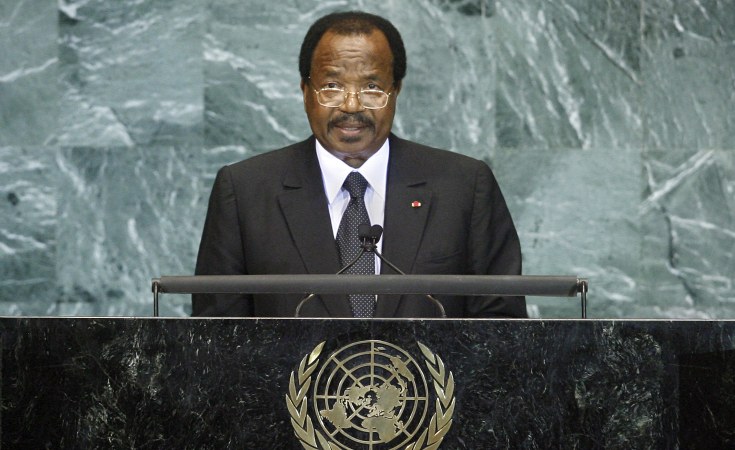 Cameroon is dealing with a deadly though insufficiently reported civil war in its two English-speaking (minority) regions of the North-West and South-West. Since 2017, Anglophone separatists have been fighting for a new "Republic of Ambazonia", derived from the Ambas Bay area in the Gulf of Guinea. On 10 January 2021, Cameroon's soldiers killed at least nine civilians in the South-West region, and injured four more. In the second week of March there were further reports of the army killing many more civilians, although the army disputes this.

International efforts to encourage Cameroon's reclusive octogenarian president, Paul Biya, to seek a peaceful resolution have failed so far. On 2 February 2021, the Vatican's Secretary of State, Cardinal Pietro Parolin, completed a five-day visit to the country, and met with Biya over the Anglophone separatist crisis. This follows previous statements from the European Union and US Senators asking for peaceful solutions. Ignoring these calls, Biya has resolutely pursued a military solution to the conflict.

The conflict originated from peaceful protests in Anglophone Cameroon over longstanding grievances against the discrimination and marginalisation of the North-West and South-West regions. Anglophones' principal complaints include poor resource allocation and lack of effective political representation. They claim that there is a deliberate cultural project of "Francophonisation" of the state.

In late 2016 Anglophone lawyers' and teachers' unions specifically decried the appointment of French-speaking teachers, judges and prosecutors to schools and courts in Anglophone Cameroon.

Spurred by social media, these protests lasted almost a year. But in October 2017, the violent repression of these protests, including branding the protesters as "terrorists" and authorising the use of deadly force on unarmed civilians, was a major factor in escalating this Anglophone dissent into a full-blown revolt and civil war.

In his end-of-year address to Cameroonians in December 2020, Biya suggested the country had "returned to peace". From a leader who has not visited any areas affected by the conflict, this claim is a patent denial of the reality of this conflict, or wishful thinking at best.

In truth, the war appears to no longer rile political authorities in the capital Yaoundé as it did before. But the conflict remains a deadly reality for civilians caught in the cross-fire between government forces and separatists.

In the January 2021 joint report  [PDF] on the conflict by the African Leadership Centre of King's College London and the Research Centre for Trust, Peace, and Social Relations at Coventry University, Kiven James Kewir and his colleagues write that the conflict has resulted in "over 3,000 people killed, more than 200 villages burnt, over 750,000 people internally displaced and 1.3 million people in need of assistance". They conclude that "there is an urgent need to resolve the Cameroon Anglophone conflict". Cameroon scarcely makes it onto the radar when African conflicts are catalogued.

History of Anglophone grievances
Anglophone grievances in Cameroon date back to 1961, when former British Southern Cameroon voted in a United Nations' plebiscite to join the newly independent French Cameroon to attain its own independence. Soon after the reunification of the two Cameroons, the country's authoritarian leader then, Ahmadou Ahidjo, vigorously dismantled key democratic institutions and extended the brutal police state in French Cameroon to the Anglophone areas. Notwithstanding a few changes, including the bloody struggle for a return to multiparty politics in 1990, Cameroon's authoritarian character has remained largely unchanged since Biya came to power in 1982.

In the ongoing civil war, government troops and Anglophone separatists wage campaigns of terror violating international norms of warfare. The war has been marked by controversial killings and gross violations of human rights variously attributed to both sides. These controversies and abuses include extrajudicial executions, abductions, torture, detentions, everyday harassments and extortions of the civilian populations, and even burning of houses with residents in them.

Government troops, much more than the separatist forces, have rightly come under greater scrutiny and criticism for impunity for their violence, putting Yaoundé on the defensive. Government has repeatedly rushed to deny accusations against its troops. This conflict persists largely because of the entrenched violence of authoritarianism in Cameroon.

As Cameroonian historian and philosopher Achille Mbembe remarked, this "useless" war could have been prevented if Cameroonian authorities had responded "more intelligently and less brutally". This intelligent response would have required political authorities to investigate and seek accountability for the causes of Anglophone grievances. However, Cameroon's authoritarian state has resisted any efforts at accountability.

The Anglophone Cameroonian diaspora in countries like South Africa, Belgium, Germany, the United Kingdom, and the United States plays a key role in this conflict. A considerable part of this diaspora is either sympathetic to or promotes the separatist cause as a lasting solution.

On 17 February 2021, 61 members of Cameroon's National Assembly wrote a letter to the US Congress, partly to complain about the role of this Anglophone diaspora in the conflict. However, Cameroonian authorities would be well served to look inward. Biya's pursuit of a military option cannot bring a lasting solution to the deep-seated causes of Anglophone marginalisation, resentment and disaffection. Rather, real peace will require a robust parliamentary inquiry and hearings on the war for a start.

Unfortunately, Cameroon's parliament is not independent; it is willed and directed by Biya. Ultimately, the United Nations and the African Union will need to establish a joint framework for the pursuit of political negotiations to end the war. Discussions within this framework must also focus on Anglophone demands for reform of the Cameroonian state, whether this is a return to the federal option adopted in 1961 or a new, more creative and internationally guaranteed option that would grant Anglophones autonomy on the management of their resources and public services.

Rogers Orock is a Senior Lecturer in Anthropology at the University of the Witwatersrand and a Bradlow Fellow in the African Governance and Diplomacy Programme at the South African Institute of International Affairs. He is researching the dynamics of the Cameroon diaspora in the conflict.

Biya Is Continent's Oldest President - Assessing His 38 Years in Power

Next Story
Tagged:
Copyright © 2021 South African Institute of International Affairs. All rights reserved. Distributed by AllAfrica Global Media (allAfrica.com). To contact the copyright holder directly for corrections — or for permission to republish or make other authorized use of this material, click here.