Congo-Kinshasa: Death of an Ambassador and the Congolese Slaughter 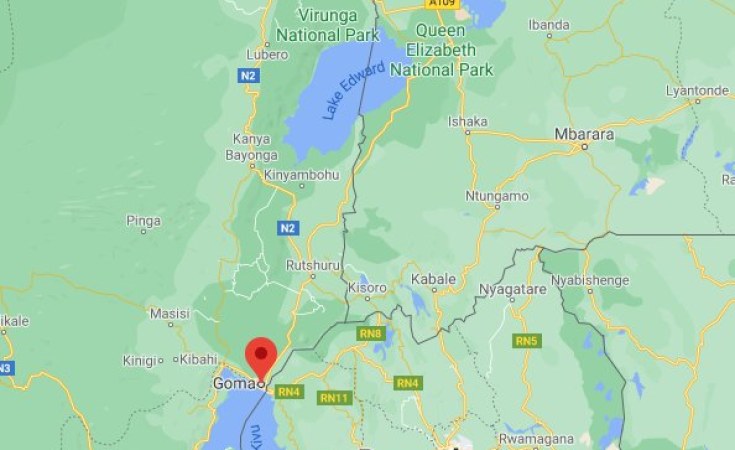 Google Maps/screenshot
A map showing the location of Goma (on Lake Kivu) and the Virunga National Park in the Democratic Republic of Congo.
Inter Press Service
opinion By Jan Lundius

Stockholm / Rome — On the morning of 22nd February a jeep from the World Food Programme (WFP), followed by another one with the Italian ambassador, Luca Anastasio, was driving along Route Nationale 2 passing by The Virunga National Park, an UNESCO Congolese World Heritage Site famous for its dwindling population of unique mountain gorillas.

A perilous voyage, not only due to tomb-deep potholes, but especially the presence of various, extremely dangerous, armed criminals. Since most people in the area are poor it is quite common that children and women are abducted in groups, to make a joint ransom worth while. However, a foreigner (humanitarian worker, or occasional tourist venturing to spot gorillas in the National Park), or a medical doctor, may provide a more substantial ransom. To release a physician Congolese kidnappers have been paid up to ten thousand USD. This might be a reason to why the WFP logo painted on the white jeep attracted the attention of attackers.

By the so called Three Antenna Crossing, armed men rushed out from the jungle, though they were immediately discovered by armed rangers protecting the National Park, who opened fire and drove the assailants away. However, the ambassador's driver, Mutapha Baguma, was already dead, the ambassador expired just minutes after him, while his bodyguard, the carabiniere Vittorio Iacovaci died during transport back to Goma.

These shocking deaths, were in international media generally overshadowed by COVID-19 and turbulence in the U.S. and Myanmar. Just as more than 25 years of ongoing misery and mass slaughter in The Democratic Republic of the Congo (DRC) seldom have come to the forefront of international reporting. After Algeria, DRC is the largest country in Africa and has a population of at least 110 million. In 2010, it was estimated that due to the ongoing conflicts in the DRC people died at a rate of 45,000 per month. The death toll during the First (1996-1997)- and Second (1998-2003) Congo Wars and subsequent internal conflicts has been estimated to 5,5 million, making the still ongoing crisis the most devastating conflict since World War II.

The NGO Human Rights Watch estimated that armed groups in eastern Kivu, where the Italian ambassador was killed, had between June 2017 to June 2019 killed more than1,900 individuals and kidnapped at least 3,300. According to UNHCR, the situation in the DRC has worsened after 2017 and remains a major moral and humanitarian challenge, comparable to the wars in Syria and Yemen. What is often ignored by international media is that the largest militias intend to benefit from the extraction of diamonds, oil, precious timber and minerals. All this to line the pockets of already rich sponsors, who may be found both locally and abroad, this while poverty continues to reign among most Congolese and it has been like that for at least one hundred and fifty years.

While I was working for the Swedish International Development Organization (Sida) I met during a visit to Senegal Professor Kandeh, who came from another West African nation. The nice and witty Kandeh told me:

It may not appear so, but for several African nations natural resources are an evil curse, a reason for greed and violence to wreck havoc all over. I have witnessed how the discovery and exploitation of natural wealth have plunged peaceful agricultural communities into an unfathomable inferno. No ... I tell you, if desirable resources are found within a poor, rural society - just pour asphalt all over the site, seal it off and keep people out. I might be exaggerating, but you cannot imagine the misery I´ve seen.

The vast area of the Congo River Basin did for centuries support small agricultural communities, hunters and gatherers, as well as kingdoms like Azande, Luba and Luanda, until the monstrously greedy Belgian King Leopold at the 1885 Berlin Conference acquired "rights to the Congo territory". How the king of a small European nation could be "granted" a territory big as the combined areas of Spain, France, Germany, and the Scandinavian peninsula, is undeniably absurd. Nevertheless, Leopold declared that all this was his private property and named it the Congo Free State. His army, Force Publique, forced the local population to produce rubber and collect ivory. From 1885 to 1908, millions of Congolese people died from disease and ruthless exploitation. In 1908, Leopold, reluctantly ceded "his" State to the Belgian State and it became known as Belgian Congo.

On 30th June 1960, Congo achieved independence. Patrice Lumumba was elected as the huge nation's first Prime Minister. The outlook was bleak. By the end of the 1950s no Congolese within the Force Publique had been promoted beyond the rank of non-commissioned officer. Even if approximately 42 percent of youth of school-going age was literate, most education had been limited to vocational training. Within an estimated population of 17 million, only 1,400 students were in 1960 receiving academic education, in Congo or abroad, and during seventy-five years of Belgian rule an infinitesimal small part of the population had been allowed to enjoy such an opportunity.

At once, conflicts arose over the administration of the territory. With active support from Belgium the mineral rich province of Katanga attempted to secede under Moïse Tshombe. After the UN and Western governments refused his requests for aid, Lumumba approached the Soviet Union, was taken prisoner and less than half a year after his accession he was executed in the presence of Katangan and Belgian officers.

By late1965, the head of the Congolese Army, Mobutu Sese Seko, gained a dictatorship through a coup d'état and due to his anti-communist stance he received considerable support from the United States. Corruption became rampant. Mobutu headed a full-fledged kleptocracy which he himself termed le mal Zairois, the Zairian Sickness. Following the 1996 Rwandan civil war and genocide and the establishment of a Tutsi-lead Government, the infamous Interahawame, the murderous Huti militia, fled to eastern Congo, using it as a base for incessant incursions against the Rwandan Government, while they allied with Mobutu's forces to attack Banyamugele, Congolese Tutsis who supported the armed Congolese opposition led by Laurent-Désiré Kabila.

In 1997, Kabila ousted Mobutu, but his refusal to give concessions to the Banyamugele people, and the governments of Rwanda and Uganda, led to the Second Congo War, which ultimately engaged nine African nations, and at least twenty armed militias, causing immense bloodshed and suffering. "Peace" was brokered in 2003, but due to this conflict DRC has still five million internally displaced persons and one million refugees abroad.

Epicentre was the eastern provinces of South and North Kivu (where the Virunga National Park is situated). Ruthless armed units like Fdlr and Adf, still operate in the area, terrorizing the civil population. Forces démocratiques de libération du Rwanda (Fdlr) consists of ethnic Hutu, several of them former Interahawame, mainly fighting the Banyamugele and Rwandan government troops. Forces démocratique alliées (Adf) are Muslim Ugandans fighting their Central Government from bases in the Congolese Northern Kivu province. Adf cooperates with various international Jihad groups, which goal it is to establish a Wilaya, a sharia-governed province in the centre of Africa. Both Fdlr and Adf terrorize and extort the local population and so do common bandits, militias from Burundi and occasionally even units from the national Congolese army.

By the beginning of 2001, President Kabila was assassinated and his son Joseph took over the presidency, though DRC remained poor and corrupt, while abuses of human rights, forced disappearances, torture, arbitrary imprisonment, endemic rape and restrictions on civil liberties continued.

After civil unrest, due to Joseph Kabila's initial refusal to accept an election defeat, Félix Tshisekedi was sworn in as President in January 2019. He has then tried to convince the presidents of Uganda, Rwanda and Burundi, none of of them are on good terms with one another, to cooperate in efforts to pacify the Kivu area and participate in programmes to integrate militia members in civil society, or maybe even in regular armies. Uganda's and Rwanda's presidents have reluctantly agreed to discuss pacification plans with Tshisekedi, while Burundi's Ndayishimiye has so far refused to participate in any discussions. Uganda's Museveni has been president for 35 years and Kagame of Rwanda has governed his nation since 2000. International observers are pessimistic about the outcome of deliberations about stabilising the situation in Kivu, pointing out that "it is difficult to discuss viable solutions and cooperation without taking into consideration problems with functional democracy within the region and a wealth of hidden agendas. Furthermore, Tshisekedi is by several leaders considered to be inexperienced and weak."

The UN has 18,000 peacekeepers in DRC, though they have been far from achieving their goal to support any peaceful coexistence. Furthermore, the Trump administration withdraw much of its support to the Congolese UN mission, forcing it to shut down five bases, to cut costs.

In spite of this quagmire of death and suffering many stakeholders are still interested in Congo, though far too many of them are not motivated by any humanitarian concerns, but rather a desire to lay their hands on the nation's natural wealth. Few believe in a radical change for the better. The death of a well intentioned person like Ambassador Luca Anastasio is not helpful. Anche Mukwege, Nobel prize winning director of a hospital just south of Kivu stated:

I am very saddened since Luca wanted the best for my people. He paid for his concern for others with his life.

Jan Lundius holds a PhD. on History of Religion from Lund University and has served as a development expert, researcher and advisor at SIDA, UNESCO, FAO and other international organisations.