Africa: Reversing the 'Resource Curse' in Africa - What Can Be Done? 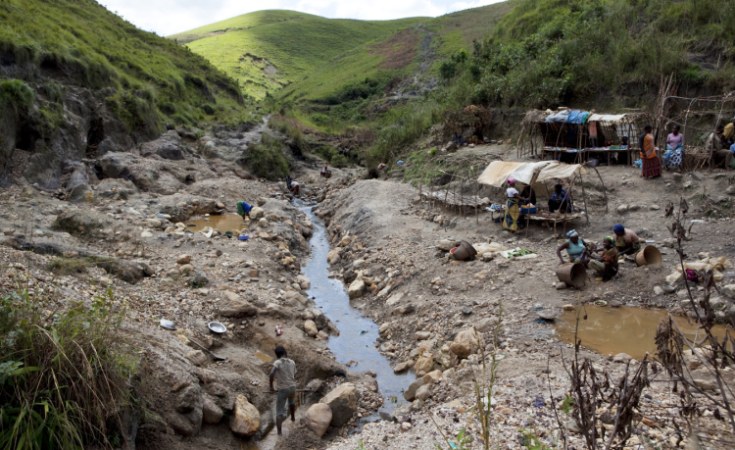 Christian Aid / Tom Stoddart / Getty Images
Every day, hundreds of thousands of pounds worth of precious minerals such as cassiterite (tin-ore) and coltan are mined illegally and bought by foreign multi-nationals for use in the manufacture of mobile phones, DVD players and computers.
Africa In Fact (Johannesburg)
analysis By Emmanuel Graham

The African continent is rich in natural resources like gold, diamonds, oil, bauxite, coltan, and much more. Several countries such as Nigeria, Angola, Democratic Republic of Congo and Chad, among others, have not been able to translate these resources into development for the benefit of its people. This situation is popularly known as the 'resource curse' (Gelb, 1988; Auty, 1993; Karl, 1997) or the "Orthodox Resource Curse Approach" (ORCA) which suggests that resource rich countries have the predisposition to perform poorly in economic output and other developmental outcomes (Papyrakis, 2017). Studies have shown, though, that other countries such as Norway, Canada, Botswana and others have been able to use their natural resources to achieve positive development outcomes (Iimi, 2007; Mehlum et al., 2006; Robinson et al., 2014).

The ORCA has been critiqued for several limitations that centre on whether these resources actually lead to a curse. For example, some have argued that resource wealth entices developing countries with rich natural resources into the international capitalist system. Consequently, this hinders developing countries seeking economic development (Davis & Tilton, 2005; Mehlum et al., 2006). Other research has shown that the causes of the resource curse cannot be restricted to domestic politics and governance only - we must also look at the global dimension regarding multiple actors' involvement in fomenting the resources curse (Panford 2017; Andrews and Siakwah 2021; Ayelazuno 2014). The ORCA generally has been criticised as being deterministic, uncritical, internalist and ahistorical (see Cramer 2002; Ayelazuno 2014).

The 'resource curse' (Gelb, 1988; Auty, 1993; Karl, 1997) suggests that resource rich countries have the predisposition to perform poorly in economic output and other developmental outcomes (Papyrakis, 2017).

Despite the limitations of the ORCA, it is essential to note that natural resource exploitation has a diverse (and often negative) impact on communities and cities where these resources are being extracted (Gilberthorpe & Papyrakis, 2015; Hilson, 2006). In an effort to reverse these negative impacts, recent discourse has pointed to the notion of 'Africa rising'. This was articulated in the Africa Mining Vision (2009), in which several African leaders were committed to the project of using Africa's minerals for development (Africa Progress Panel, 2013). Several schools of thought have argued that this goal can be realized through local content policies (LCPs), resource nationalism, development minerals and so forth (Ovadia, 2016; Saunders & Caramento, 2018). To eradicate the resource curse generally, a great deal of research has offered solutions such as solid macro-economic policies, economic diversification, natural resource funds, domestic or national ownership of resources, as well as transparency and accountability initiatives (Weinthal & Luong, 2006).

To expand on the above solutions, the question that comes to mind is why there is a disconnection between theory and practices and how we can encourage better behaviour in the extractive sector. In my view, the following interventions may also help to reverse the resource curse in Africa: To begin with, we must ensure responsible mining. Mining corporations operating in Africa must be strongly incentivised to adhere to rules and regulations in their respective countries of operation. Simultaneously, credible threats need to be articulated and implemented to deter defection. Corporations that are dependent on investor funding tied to taking Environmental and Social Governance (ESG) seriously, for instance, may be more inclined to behave responsibly and produce mutually beneficial long-run outcomes. It is simultaneously critical that there be several levels of multi-stakeholder conversations between locals, government and mining corporations in order to ensure diverse views and approaches to strengthen local communities and implement environmental standards and regulations in the country of operation. It is essential to have cleaner, safer and efficient mining sites that protect workers and increase productivity. Illicit mining must also be discouraged through appropriate legislation and its enforcement, as it endangers lives and creates extensive environmental risks. Companies and governments need to collaborate to provide alternative jobs for those involved in illicit mining.

To eradicate the resource curse generally, a great deal of research has offered solutions such as solid macro-economic policies, economic diversification, natural resource funds, domestic or national ownership of resources, as well as transparency and accountability initiatives (Weinthal & Luong, 2006).

Second, mining companies operating in Africa must support communities through corporate social responsibility (CSR), not as a tick-box exercise but rather because they recognise that business performance ultimately depends on social performance. This can be done through stronger company-community relationships. Corporations should adopt a community lens in their CSR operations as this relationship is essential in keeping long-term sustainable community development projects (Kemp, 2010). The corporations should identify community goals and priorities, changes in the community's nature, local political dynamics, and representation for all members of society (Gardner, 2012; Scheyvers and Hugues, 2015). Consequently, extractive sector corporations must use an approach which comprehends the structure, process, effectiveness, value, and consequences of community development concerning their activities, impacts, and systems. Harvey (2014) also notes that company culture must adopt more inclusive and outward-facing values to maintain their social license to operate within communities. In what accounts for the disparity between companies' CSR activities and perceptions of affected communities, Osei-Kojo and Andrews (2018) argued that misplaced priorities, duplication of projects, high expectations from host communities, and the insufficient engagement of stakeholders undermine CSR in Ghana. These occur because of the lack of communication, consent, and consultation between the company and the community. If businesses build a stronger relationship with their community members, projects will be targeted to meet community expectations.

Finally, civil society and the media must play a "watchdog role" in monitoring companies' adherence to the laws of the countries in which they operate. Both the state and civil society should be dedicated to transparency, accountability and the development of the extractive industry. On the part of the state, this can be done by committing to transparent and competitive bidding, full disclosure of contracts and strengthening communication capacity to implement oil extractive industry-related policies and laws and improve sustainable environmental laws and management practices. On the part of civil society and media, these two pillars of governance should remain committed to transparency, accountability and the development of the extractive industry by being nonpartisan, and acquiring the necessary skills and resources needed through active training and research. Moreover, civil society should be allowed to continually be a watchdog over the extractive industry by maintaining keen surveillance on the implementation of various laws and regulations in the industry. It must also be given space without any hindrance from governments or companies to function in that capacity.

Civil society and the media must play a "watchdog role" in monitoring companies' adherence to the laws of the countries in which they operate.

In conclusion, the effect of the so-called resource curse is evident in Africa: conflict, poverty, environmental degradation and poor economic outlook. To reverse these effects, a multi-stakeholder approach between the state, corporations, civil society and communities is required. Any solution that is not genuinely multi-stakeholder, in my view, would be an exercise in futility. While the private sector might face significant above and below-ground risks in the extractive space, it is in their best long-run interests to be responsible development partners rather than mere resource extractors.

Harvey, B. (2014). Social development will not deliver social licence to operate for the extractive sector. The Extractive Industries and Society, 1(1), 7-11.

Previous Story
Inside Goma - Dangerous City of Diamonds, War and Volcano
Next Story
Blockchain Is Great, but It Can't Solve Everything. Take Conflict Minerals.

Inside Goma - Dangerous City of Diamonds, War and Volcano

Blockchain Is Great, but It Can't Solve Everything. Take Conflict Minerals.

Next Story
Tagged:
Copyright © 2021 Africa In Fact. All rights reserved. Distributed by AllAfrica Global Media (allAfrica.com). To contact the copyright holder directly for corrections — or for permission to republish or make other authorized use of this material, click here.