Africa's Battle With Covid-19 Continues, One Year On 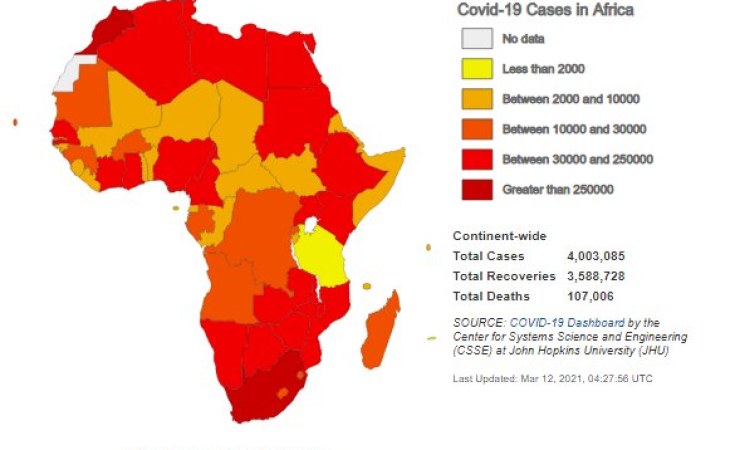 The COVID pandemic has hit Africa less severely than was initially feared. But the consequences of the crisis are huge: the economic slowdown has amplified social inequality, as limited access to vaccines dampens hopes.

When the World Health Organization (WHO) declared the global spreading of the SARS-CoV-2 a pandemic on March 11, 2020, the African continent had just 47 confirmed cases and no deaths.

"Unfortunately, Africa has now caught up," Anja Osterhaus, program manager for Oxfam Germany, told DW about the developments in the 12 months seince then.

As of March 10, 2021, the African Centre for Disease Control (Africa CDC) reported 3,994,030 infections and 106,712 deaths linked to the coronavirus. More than 3.5 million have meanwhile people have recovered from the virus. However, the number of unreported cases is likely to be significantly higher.

There is one serious consequence of the pandemic that will continue to plague Africa for a long time. The economy has suffered greatly from trade barriers and the global collapse in demand for goods and services from the African continent.

Border closures have been detrimental not just for tourism but also for Africa's informal sector. According to the World Bank's preliminary calculations, the economic output in sub-Saharan Africa shrank by 3.7% in 2020. An Oxfam report predicted that the pandemic's economic impact could set back Africa's fight against poverty in some areas by 30 years.

"According to the report, a 20% drop in household income would cause more than 400 million people worldwide to slip below the $1.90-a-day (€1.59) poverty line," Oxfam's Osterhaus said. Over a quarter of the people that could be affected by this change live in sub-Saharan Africa.

According to Osterhaus, women and girls suffered the most from the pandemic's effects, with poorer families in particular struggling to make up for significant income losses. With monthslong school closures across the continent, adolescent girls have been especially affected, in some cases for life:

"Many girls are married off earlier or fall victim to sexual assault. In many places, they are no longer allowed to go to school when they are pregnant," Osterhaus said. World Vision International -- a humanitarian aid organization -- stated that an estimated one million pregnant girls in sub-Saharan Africa would not return to school.

Education has been abruptly interrupted for a generation of students due to COVID-19. Organizations such as Save the Children and the UN children's agency UNICEF fear a global learning crisis.

"In South Africa, similarly to many countries worldwide, schools closed in March. About 30 million children in South Africa were affected," Andile Dube, a UNICEF education expert, told DW. "Whether they go to the public system or they go to a private system of education."

The majority of those students have returned to school in September 2020 after some restrictions were eased, but the learning loss is nevertheless huge and might take years to catch up on.

But that's not all when it comes to the indirect consequences of the pandemic on the education sector. "COVID has widened existing inequalities. Only the children of the richer families have access to virtual learning," Dube said. This is true for many African countries.

According to recent statistics from the UN education agency UNESCO, 8.3% of all enrolled students globally are still affected by school closures or limited access to education. In sub-Saharan Africa, schools are still partially or completely closed in seven countries.

Other public health crises in the making

The fight against other diseases such as malaria and HIV/AIDS has also stalled in the past year "The COVID pandemic is now pushing us even further away from our goals," Winnie Byanyima, director of UNAIDS, said.

The impact of COVID-19 could cause an additional 148,000 people to die from HIV/AIDS, according to UNAIDS. One of the reasons for this is that HIV-positive people are afraid of entering hospitals, where in addition to COVID, many other airborne diseases could spell a major episode of immune compromisation for them.

But there are also more nefarious reasons behind these statistics: "Sexual violence is a major cause of new infections, especially in Africa," Byanyima added.

Furthermore, another reason for the predicted influx of HIV cases is the fact that since the coronavirus pandemic broke out, fewer people are getting tested for other diseases, with the vast majority of public health programs turning their attention to COVID.

But with the development of COVID-19 vaccines, people around the world have become more hopeful and trusting of their public health systems. However, unequal access to these vaccine has raised cause for concern: "It is shameful, but most African countries have not been able to give a single dose of COVID-19 vaccine," Oxfam spokesperson Osterhaus said.

The distribution of vaccines into Africa has partly been hindered by design: Economically privileged countries in the EU, the United Kingdom and the United States have all blocked proposals to expand vaccine production by overriding pharmaceutical companies' monopolies, placing profits over lives. Yet that is the only way to guarantee equal access to vaccines, Osterhaus said.

Whilevaccination campaignshave begun in a few cash-rich African countries, such as South Africa, Nigeria, Kenya, and Ghana, others will still be waiting their turn for months, if not years.

Innovative solutions on the rise

But there are also some bright spots in this crisis. Online retail and the start-up scene are booming across the continent. "2020 surprised everyone," said Nicholas Kendall of GreenTec Capital, an investment firm specializing in African startups.

"It was a sluggish year, and the winners were determined by their ability to adapt. Despite all that, the number of deals in Africa has continued to grow," Kendall told DW.

Entrepreneurship is indeed thriving in Africa -- despite the global pandemic situation, and perhaps even more so than in other parts of the world. Luther Lawoyin, who has already founded four start-ups in Lagos, Nigeria, explained why: "We have fundamental problems to solve: energy, housing, food. These force us to be innovative. We have to find solutions, no matter how risky it is.

Silja Fröhlich and Daniel Pelz contributed to this article