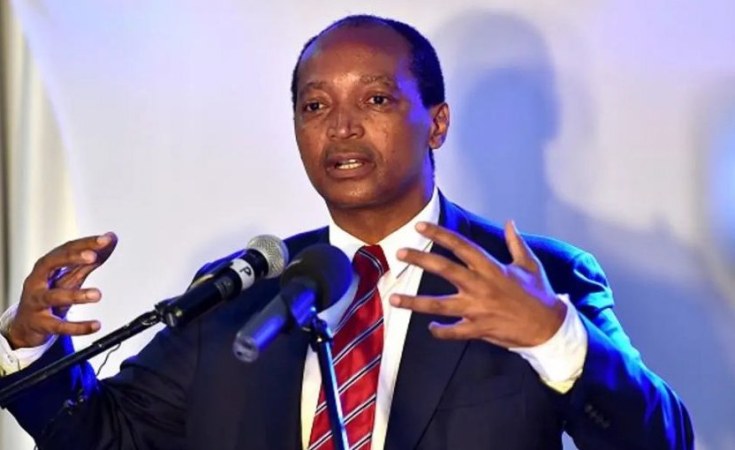 SAFA
Patrice Tlhopane Motsepe, the South African mining billionaire who has been elected president of the Confederation of African Football.
The Herald (Harare)
By Mehluli Sibanda

THE ZIFA leadership has said Patrick Motsepe's rise to become CAF president provides justification for their decision to throw their support behind the South African billionaire at a time when there was uncertainty as to where the wind would eventually blow.

Motsepe, the 59-year-old mining magnate, who is believed to be Africa's ninth richest person, was the last man standing in the race for the CAF presidency when all his major rivals decided to bow out of the contest and throw their weight behind his candidature.

FIFA president Gianni Infantino turned into the key broker, persuading the continent to rally behind one strong candidate for the sake of uniting its different parts and communities, and negotiating the compromise arrangement for the game's leadership.

This meant Augustin Senghor of Senegal, and Ahmed Yahya of Mauritania, who had initially throw their names into the hat to fight for the CAF presidency, withdrew their bids and became the organisation's first and second vice presidents.

"The newly elected CAF executive committee held its first meeting this morning, 13 March 2021 in Rabat," a statement from CAF read.

"The meeting was chaired by the CAF president, Dr Patrice Motsepe. The following decisions were made unanimously:

Mr Ahmed Yahya was coopted in the Executive Committee

The president thanked Mr Abdelmounaim Bah, who had occupied the role (of general secretary) on an acting capacity.

ZIFA, who were represented by their president, Felton Kamambo, and acting vice-president, Philemon Machana, who is also the association board member, in charge of finance, said they were in full support of Motsepe.

"We thank everyone who made this a reality, including the contribution of those that later saw our vision," Machana said.

"We are grateful the majority later changed tact and bought into the vision, including the then competitors of the new CAF president who, unselfishly, chose to support the best man available for the job.

"We say well done to Motsepe, we as ZIFA, will do whatever we can to support his tenure and vision for the development of the game in Africa."

Machana said ZIFA and their counterparts in South Africa and Nigeria backed Motsepe, when many others hadn't seen the value in bringing in the South African billionaire, to take over as CAF president.

"It's SAFA, ZIFA and Nigeria which made the Motsepe dream a reality. After 48 countries had been railroaded to endorse Ahmad, ZIFA refused to do the same.

"Should ZIFA had done that Motsepe would not have found sufficient nominators to stand in the election as one can't nominate two candidates on same post.

"We went for Motsepe, because of his rich reputation as a professional, a deal broker, stable family man and a football-mad individual whose footprints in both commerce, and sport, are there for all to see.

"This gentleman, who is a philanthropist of note, is easy going, firm and effective. We rather celebrate what the incumbent CAF president is going to do for our football with his team of dedicated men and women."

ZIFA, though, might need to work on repairing their relationship with the new CAF secretary-general, Mosengo-Omba, which appeared fractured during the stormy days of battles for the association's leadership, three years ago.

Kamambo, who was then challenging Philip Chiyangwa, for the ZIFA presidency, questioned Mosengo-Omba's professionalism, and neutrality, in a letter to FIFA secretary general, Fatma Samoura.

"FIFA must come and supervise the elections, but not Veron, who is a close confidante of Philip Chiyangwa," Kamambo, who wanted the polls to be delayed by about a month, wrote, in his letter, back then.

"The current electoral committee must be dissolved for reasons mentioned above and in my other communications. I have lost confidence in them because they are captured."

However, FIFA insisted that the polls, which Kamambo later won, had to be held, as scheduled, on December 16, that year, while the world football governing body threw their full backing behind Mosengo-Omba.

"Finally, we would like to seize this opportunity to inform you that FIFA will deploy a delegation to Harare, to observe the electoral proceedings,"Fatma wrote in that letter.

"In this context, we strongly repudiate the unfounded, and defamatory allegation that Mr Veron Mosengo-Omba, FIFA director Africa and Caribbean region, would be in any way compromised, or partial, with regard to the ZIFA elections.

"We thank you for taking note of the above."

Today, the same Mosengo-Omba, has now taken over as the CAF secretary-general.

FIFA also confirmed, in a statement, the Congolese administrator will now take over as the chief executive of African football.

"Mr Mosengo-Omba initially joined FIFA in 2016, as Chief Member Associations Officer with responsibility for Africa and the Caribbean, and subsequently spent the past two years supporting all FIFA 211 MAs to implement the FIFA Forward development programme, as well as managing relationships with all FIFA MAs and continental confederations in his role as Chief Officer of the division," FIFA said in their statement.

"A native of the Democratic Republic of the Congo, Mr Mosengo-Omba was particularly involved in supporting the 54 African MAs in their FIFA Forward projects, in the development of youth and women's football throughout the continent, and in the recent implementation of the FIFA Covid-19 Relief Plan."

Infantino and Samoura then issued a joint statement, expressing their gratitude, for the work Mosengo-Omba oversaw, during his time at FIFA.

"On behalf of all of FIFA, we would like to thank Véron Mosengo-Omba for his excellent work and wish him the very best of luck in his next challenge as CAF General Secretary," the statement read.

"FIFA also looks forward to working with him on future projects in helping to project African football to the summit of world football."