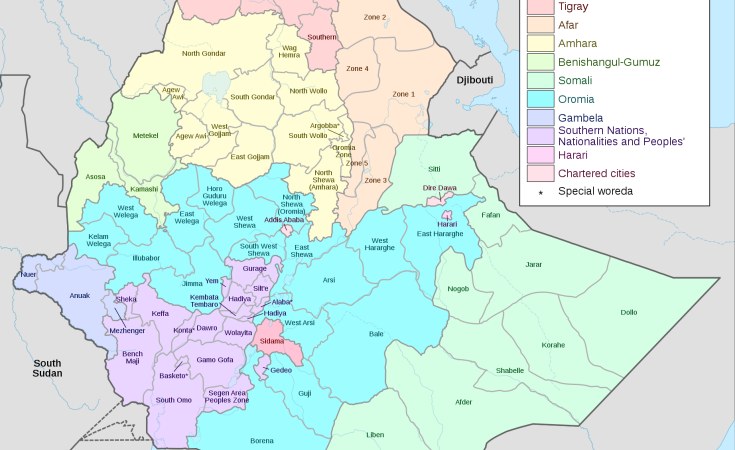 NordNordWest/Wikimedia Commons
A map of the regions of Ethiopia.
African Arguments
analysis By Etana H. Dinka

Underlying many of Ethiopia's conflicts and political confrontations is a disagreement over the future of the nation.

Nearly five months since the war in Tigray began, reports continue to trickle out of mass atrocities and attempts at ethnic cleansing. Refugees have told harrowing stories of brutal massacres. Millions of people in the region are reportedly in need of humanitarian assistance. And while journalists' and aid workers' access to the war zone remains severely restricted, information continues to emerge of deadly fighting between Ethiopian soldiers, Eritrean troops and Amhara militias on one side and fighters loyal to the Tigray People's Liberation Front (TPLF) on the other.

This devastating war began on 4 November 2020 as what Prime Minister Abiy Ahmed referred to as a "law enforcement operation". It came after years and months of escalating tensions between the federal government and the TPLF. Since Abiy took office in April 2018, he has reduced the power of the once dominant Tigrayan party. The TPLF leadership retreated to their home region and clashed with the prime minister on a number of issues.

When Abiy dissolved the ruling coalition known as the Ethiopian People's Revolutionary Democratic Front (EPRDF) in December 2019 and founded the Prosperity Party (PP) in its place, the TPLF rejected the move. Similarly, when the federal government postponed national elections last year, allegedly due to the pandemic, the TPLF defied the directive and held regional elections nonetheless. These tensions escalated into military manoeuvres that eventually triggered the conflict.

A broader battle over the future

Underlying these disputes, however, there lies a deeper ideological disagreement over the future of the nation. When the EPRDF, led by the TPLF, overthrew the military regime in 1991 and took power, it inherited a huge country made up of numerous nations and a deeply divided society. Its solution was to institute a multinational federal state structure, largely carved up along ethno-linguistic lines. This resolved some problems but contributed to others and, over the years, animosity towards the increasingly authoritarian rule of the TPLF grew. In the mid-2010s this culminated in widespread protests that were particularly strong in the Oromia region and, later, Amhara region.

By 2018, the EPRDF could not withstand the pressure and selected Abiy as the new prime minister. From the start, the charismatic young leader spoke of uniting Ethiopia. As time has gone on, this has grown into clearer signs that he wants to dissolve the current federal system. In this ambition, he has gained the support of the Amhara elite, who have traditionally ruled the country and who regard both the TPLF and multinational federalism as anti-Amhara. Its region's parties - both those allied to the federal government and those in opposition - have expressed strong support for Abiy. Many Amhara have been given senior positions in the federal government and Amhara militias are involved in the war in Tigray.

Seen through this lens, the Tigray conflict is not an isolated power struggle between Abiy and the TPLF. Rather, it is part of a broader tussle over the heart and direction of Ethiopia. It is an element of a wider battle between Abiy and his allies on one side, and those who oppose a more unitary state system on the other. The conflict with the TPLF was one outcome of this battle, with its own unique dynamics, but is far from the only one.

The Tigray war may be the deadliest culmination of this dispute, but there are several others too. In Benishangul-Gumuz region, for instance, thousands have been killed and 100,000 displaced in recent fighting. Among the warring parties are Amhara militias who have been emboldened since Abiy took office to seize land they believe is rightly theirs. Also active are ethnic Gumuz fighters who are angry at the establishment of the PP and the prospect that ethnic federalism, which guarantees self-rule to ethnic groups, will be abolished.

In Oromia, where the desire for ethnic self-determination is popular, these dynamics are also at play. In this region, Abiy has confronted opposition in various ways. He has disempowered his key opponent Lemma Megersa, who he removed as regional president by making him Defence Minister in April 2019, and then sacked in August 2020. He launched a military campaign against the Oromo Liberation Front (OLF), a year after signing a reconciliation agreement with them. His government has jailed thousands of Oromo nationalists, while hundreds more have died in fighting. An Amnesty International report in May 2020 document eight types of gave human rights violations perpetrated by Ethiopian security forces in the west and east Guji zones of southern Oromia. The advocacy group highlighted "a persistence of old-style patterns of violence perpetrated by the security forces".

From a historical perspective, Abiy is fighting the same war that many of his predecessors did. These tended to fail spectacularly, solidifying ethno-nationalist claims rather than comprehensively defeating rebel groups. It is this situation that led to the need for multinational federalism in the first place. If this past is anything to go by, then the federal government's wars in Tigray, Oromia and Benishangul-Gumuz are likely to have similar fates. Thousands may be killed and armed groups may go into retreat, but the underlying grievances and demands will remain.

The Tigray war has many of its own unique rivalries and dynamics, but it also shares many of the same ones that underlie conflict elsewhere in Ethiopia. It is an illustration of Ethiopia's general condition rather than a unique occurrence and can only be understood fully by looking at the broader national political forces at work.

It is hoped that the war will come to an end as soon as possible and that active fighting will cease. But any peace will only be temporary so long as Ethiopia's deep political contradictions remain.

Etana H. Dinka is Assistant Professor of History at James Madison University, where he teaches African history and survey courses. His research emphasises the political and environmental histories of Ethiopia and the Horn, and Oromo-Ethiopia historiographies.

UN, Ethiopian Human Rights Body to Probe Tigray Rights Abuses
Tagged:
Copyright © 2021 African Arguments. All rights reserved. Distributed by AllAfrica Global Media (allAfrica.com). To contact the copyright holder directly for corrections — or for permission to republish or make other authorized use of this material, click here.