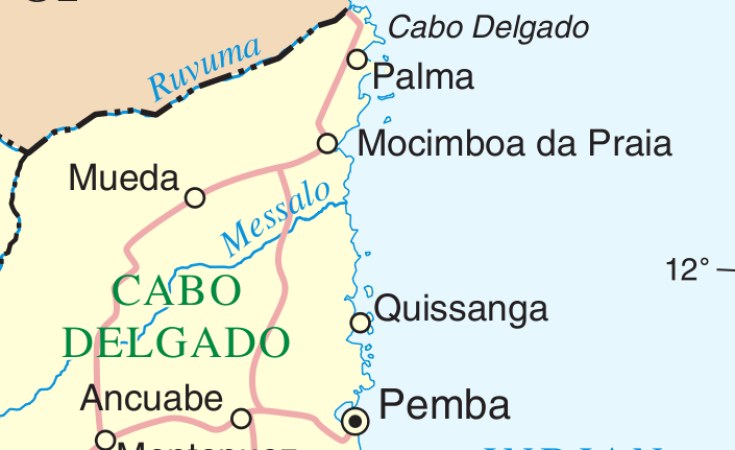 Maputo — The Mozambican Defence Ministry on Thursday morning confirmed that the town of Palma, in the northern province of Cabo Delgado came under terrorist attack on Wednesday.

The brief Ministry statement said the terrorists attacked the town from three directions, and obliged residents to seek safety by fleeing into the nearby bush.

The defence and security forces, said the Ministry, "are pursuing the enemy and are working tirelessly to re-establish security and order as quickly as possible". It urged the civilian population "to remain vigilant and calm, while seeking safe spaces".

Members of the public, it continued, "should continue collaborating with the authorities by denouncing the terrorists and armed men, so that they may be neutralised".

The Ministry added that all mobile phone communications with Palma town and district have been cut. The statement admitted that so far the government does not have information on the number of casualties or the scale of the damage.

Before communications were cut, the information reaching Maputo was that the attacks had begun at about 16.00, and that the jihadists targeted banks, shops, at least one hotel and the barracks of the Rapid Intervention Unit (UIR - the Mozambican equivalent of the riot police).

According to the independent newssheet "Carta de Mocambique", the shooting ended in the early hours of Thursday, by which time the defence forces had secured control of the town.

There are no reports of any attacks against the site on the Afungi Peninsula where a consortium headed by the French oil and gas company Total is building natural gas liquefaction plants. But Palma town is well within the Afungi security perimeter, which the Mozambican forces have pledged to defend.

It can hardly be a coincidence that the attacks came within hours of Total announcing that it is about to resume work at Afungi. Total had interrupted construction work and evacuated much of its work force after a terrorist attack on 1 January in the resettlement town of Quitunda (a new town built to house people resettled from the areas of the Afungi Peninsula where the two planned gas liquefaction plants will be built).

Since then the government and Total have worked to draw up a plan of action to strengthen security around the site, and the government has declared the area as a special security zone.