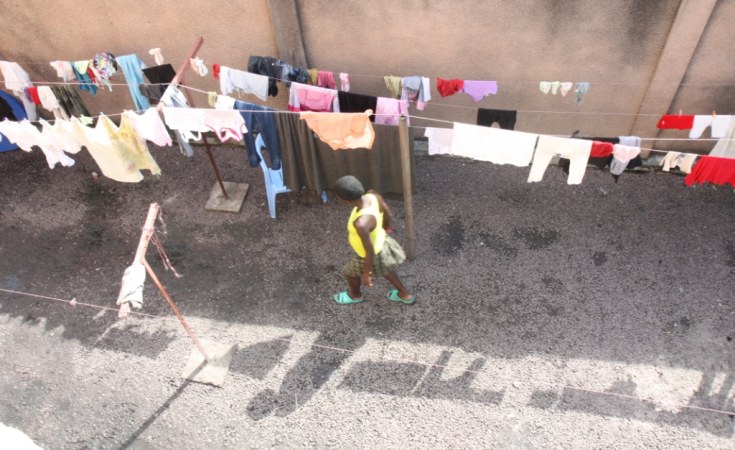 When Naomie's mother asked the teenager to join her as a sex worker in the capital of the Democratic Republic of Congo last September, she knew it was a matter of survival for the family.

The fallout from the coronavirus pandemic - from rising food prices to a curfew resulting in fewer clients for her mother - left the 15-year-old with no choice but to take to the streets.

"I am fatherless, and I have an eight-year-old brother," Naomie - whose name has been changed to protect her identity - said one evening this month in the Tshangu district of Kinshasa.

"If I don't do this, my family may perish because we have no one to support us," she said while seeking clients on Kimbuta Avenue - well-known for prostitution - with a cigarette in hand.

Naomie is one of countless girls in Kinshasa - a megalopolis of more than 12 million people - to have joined the sex trade during the last year because of the pandemic, campaigners said.

About three-quarters of Congo's 90 million people live in extreme poverty on less than $1.90 a day, and the African Development Bank has said its economy - a key global exporter of cobalt and copper - could be particularly hard hit by COVID-19.

The sprawling central African country has confirmed at least 28,845 cases of the virus, of which about 712 have died.

"A lot of girls around my age are working here (in the sex trade)," Naomie added. "I see new faces all the time."

Girls who have turned to sex work to help their families find themselves competing for clients with street children.

Prior to the pandemic, there were an estimated 20,000 such children - known as "Shegues" - in the city. Most of them resort to begging and prostitution to get by and must pay a cut of their earnings to criminal networks who control the sex trade.

For many girls - homeless or not - the sex trade is now the only viable source of income, said Jean Kalala, vice-president of REEJER, a network of caseworkers that helps street children.

"Extreme poverty and a lack of education push many young girls into prostitution because they don't know what to do," Kalala told the Thomson Reuters Foundation in an interview.

"These underage sex workers are the consequences of the social crisis that is raging in Congo," he added, referring to the impact of coronavirus on people's livelihoods nationwide.

While prostitution is legal in Congo, having sex with a girl under the age of 18 or running a child prostitution ring are crimes punishable by between five and 20 years in prison.

A senior official at the Ministry of Gender, Family and Children, Florence Boloko, said there were insufficient resources and limited scope to tackle underage prostitution.

"We only work during the day," said Boloko, director of the National Agency Against Violence to Women and Girls (AVIFEM).

"At night, we do not know how to dismantle the networks ... (or) track down these girls, and all these men (the buyers)."

For 17-year-old Vanessa, who joined the sex trade in Kinshasa two years ago, the pandemic has "destroyed her work".

Her earnings have fallen by half to about 10,000 Congolese francs ($5) a night, and she blames the rising number of young sex workers and a daily coronavirus curfew from 9 p.m. to 5 a.m.

Vanessa said she wanted to leave the trade, but did not know how else she would earn money. She had considered paying smugglers to help her reach Europe but decided against it.

Girls such as Vanessa and Naomie must deal with gangs who offer them "protection" in return for a cut of their earnings.

Naomie said the man she worked under managed 20 girls and visited her each night to take about one sixth of her earnings.

Christophe Diakonda, a police commander at nearby Sonapangu station, said that officers frequently arrested such gang members - known as "Kuluna" - but needed more support from the government to tackle the issue of young girls in the sex trade.

"Regarding underage sex workers ... we are awaiting the government's impetus to boost the operation to stop this," he added. One of his colleagues said the girls were "stubborn" and resisted police efforts to deter them from the sex trade.

As more girls take to the streets - where some are pressured to have sex without a condom and many turn to alcohol or drugs - campaigners said they were concerned for their health.

"They become easy prey for men who abuse them," said Annie Bambe, president of the NGO Forum for Youth and Children's Rights in Congo. "They often have unprotected sex with the little money they are given ... we fear a lot for their future."

Having left school at 13, Naomie would like to return to education or train as a seamstress - but cannot afford to do so.

"We do this (sex work) to earn a living," she said. "The country has abandoned us."